The city of Le Havre, on the English Channel in Normandy, was severely bombed during the Second World War. The destroyed area was rebuilt according to the plan of a team headed by Auguste Perret, from 1945 to 1964. The site forms the administrative, commercial and cultural centre of Le Havre. Le Havre is exceptional among many reconstructed cities for its unity and integrity. It combines a reflection of the earlier pattern of the town and its extant historic structures with the new ideas of town planning and construction technology. It is an outstanding post-war example of urban planning and architecture based on the unity of methodology and the use of prefabrication, the systematic utilization of a modular grid, and the innovative exploitation of the potential of concrete. 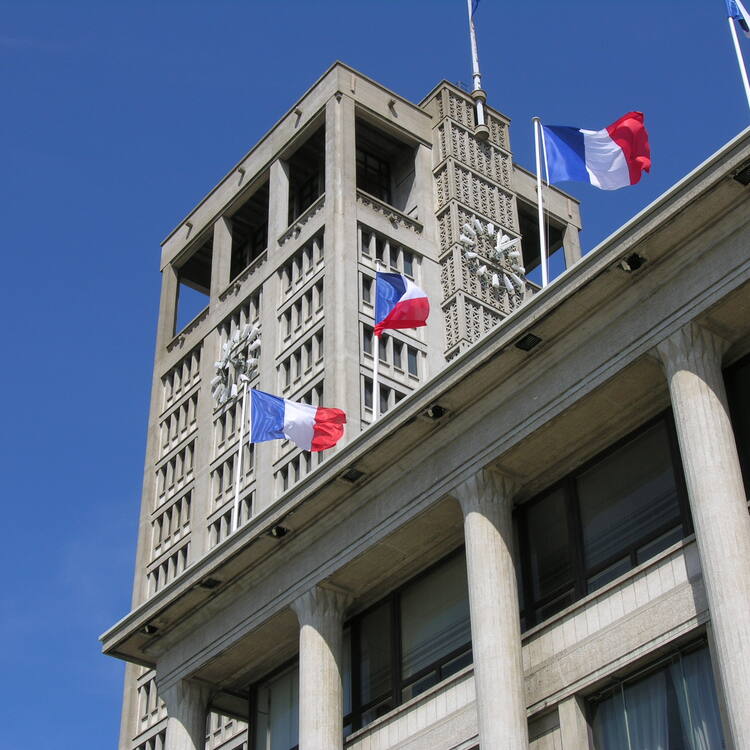 Located on the English Channel in Normandy, the city of Le Havre was severely bombed during the Second World War. The destroyed area was rebuilt between 1945 and 1964 according to the plan of a team of architects and town planners headed by Auguste Perret. The site forms the administrative, commercial and cultural centre of Le Havre. Among the many reconstructed cities, Le Havre is exceptional for its unity and integrity, associating a reflection of the earlier pattern of the city and its extant historic structures with the new ideas of town planning and construction technology. It is an outstanding post-war example of urban planning and architecture, based on the unity of methodology and the use of prefabrication, the systematic utilization of a modular grid and the innovative exploitation of the potential of concrete.

The inscribed property, an urban area of 133 ha, represents a homogenous architectural and urban ensemble. It comprises large areas (principal axes, squares, buildings and significant groups of buildings of the École du Classicisme Structurel), but also the ordinary residential fabric (streets, passages, inner city blocks) created from 1945 to 1964 within the reconstruction framework. It integrates the île Saint-François (rebuilt at the same time by regional architects, not part of the Perret team), fragments of ancient urban fabric and isolated buildings spared from destruction (around which the grid of the city is reconstructed) and buildings constructed after 1964, the presence of which appears indissociable to the rebuilt fabric (notably the Maison de la Culture, the Résidence de France, the extension of the Town Hall).

The new urban plan follows two axes: the principal public axe is formed by the broad Avenue Foch, which runs in west-east direction through the northern part of the city, taking the alignment of the earlier Boulevard de Strasbourg. It starts from the Porte Océane on the sea front and continues to Saint-Roch squere and the place de Hôtel de Ville, providing the general direction for the basic grid. At the Porte Océane, the avenue is crossed at the angle of 45° by the Boulevard François Ier, which forms the second axis. The Quartier du Perrey is on the seaside part of the boulevard. The Porte Océane is a monumental entrance to Avenue Foch and an entrance to the city from the sea, taking the idea of the ancient gate destroyed in the war. This building also became an experimental “laboratory” for the development of the structural system and methods of construction for the project. The Saint-Roch square is located in the place of an earlier public park and cemetary, which has given some of its orientations. The Hôtel de Ville (Town Hall) is the most monumental structure in the whole scheme: it measures 143 m in length, and its central part is marked by a tower of 18 stories and is 70 m in height.

Perret’s project reflects his ideal: to create a homogenous ensemble where all the details are designed to the same pattern, thus creating a kind of Gesamtkunstwerk on the urban scale. The architect reserved some of the principal public buildings for his personal design projects.

Criterion (ii): The post-war reconstruction plan of Le Havre is an outstanding example and a landmark of the integration of urban planning traditions and a pioneer implementation of modern development in architecture, technology and town planning.

Criterion (iv): Le Havre is an outstanding post-war example of urban planning and architecture, based on the unity of methodology and system of prefabrication, the systematic use of a modular grid and the innovative exploitation of the potential of concrete.

The essence of Perret’s project resides in its structural design based on a utilization of avant-garde reinforced concrete elements, with the system known as “poteau dale”. His idea was to create a completely transparent modular structure so that no structural element remains hidden, giving its domineering character and a certain unformity to all the architectuire of the city. Nevertheless, the elements are used with skill in such a way as to avoid boredom. The design of the buildings and open spaces was based on a square module of 6.24 m each side, to facilitate production, but also to introduce “musical harmony” into the city. In comparison to prer-war density, the average density of the population was reduced from 2,000 to 800 inhabitants par hectare. The spirit of the city was conceived as “neoclassical”, with closed construction blocks and where the streets remain functional. These principles of integration of urban traditions and a pioneer implementation of modern developments in architecture, technology and town planning, have been fully respected and today remain perfectly visible.

Le Havre, the City Rebuilt by Auguste Perret, is a recent work of historical importance. The plan and the location of the buildings have remained unchanged since their construction. If modernisations and current maintenance have replaced here and there some components, the authenticity of the ensemble remains intact.

The modern city constructed by Perret is protected through an Outstanding Heritage Site (SPR) listing, approved in July 2016, that defines intervention modes in buildings or undeveloped land. The SPR aims to enhance the architectural characteristics of reconstruction: scheduling façades, legibility of the load bearing structure, diversity in the treatment of concrete. Its perimeter corresponds to the inscribed property.

The SPR embraces numerous buildings protected under the Heritage Code (inscribed or listed as Historic Monuments).

The SPR devotes particular attention to sustainable development. The qualities of the Reconstruction Buildings as regards energetic material are of particular importance in the diagnostic of this area of public interest. The Agglomeration Community of Havre (CODAH), an intercommunal structure, supports individuals in their projects to improve the energy performances of their residences, and lessen negative affects on the heritage qualities of the façades.

The urbanism plan (PLU), adopted on 19 September 2011, was made compatible with the regulation and objectives of the SPR by amendment of 11 July 2016, imposing an increased degree of architectural and landscape requirements.

A local commission regrouping elected officials of the city, State representatives and qualified personalities, ensures the monitoring and implementation of the architectural and heritage enhancement plan.

With regard to concrete, the dominant material, restoration campaigns are the opportunity for specific and innovative research.