The List Town Hall and Roland on the Marketplace of ...
Print

The Town Hall and the statue of Roland on the marketplace of Bremen in north-west Germany are outstanding representations of civic autonomy and sovereignty, as these developed in the Holy Roman Empire in Europe. The old town hall was built in the Gothic style in the early 15th century, after Bremen joined the Hanseatic League. The building was renovated in the so-called Weser Renaissance style in the early 17th century. A new town hall was built next to the old one in the early 20th century as part of an ensemble that survived bombardment during the Second World War. The statue stands 5.5 m tall and dates back to 1404. 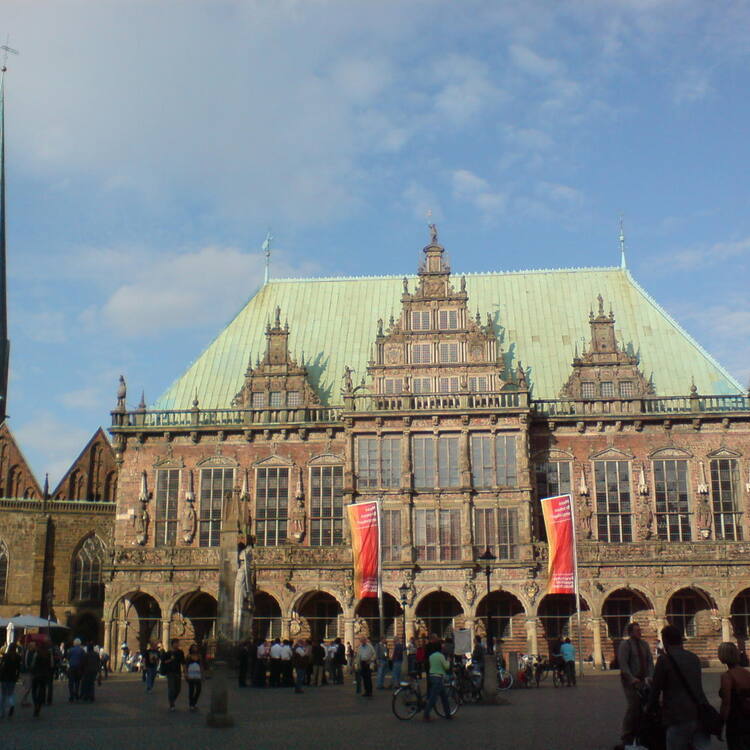 The Town Hall and Roland on the marketplace of Bremen in north-west Germany are an outstanding representation of the civic autonomy and market rights as they developed in the Holy Roman Empire in Europe. The Old Town Hall was built as a Gothic hall structure in the early 15th century, and renovated in the so-called Weser Renaissance style in the early 17th century. A New Town Hall was built next to the old one in the early 20th century as part of an ensemble that survived the bombardments during the Second World War.

The Old Town Hall is a two-storey hall building with a rectangular floor plan, 41.5 m by 15.8 m. It is described as a transverse rectangular Saalgeschossbau (i.e. a multi-storey construction built to contain a large hall). The ground floor is formed of one large hall with oak pillars; it served for merchants and theatrical performances. The upper floor has the main festivity hall of the same dimensions. Between the windows, there are stone statues representing the emperor and prince electors, which date from the original Gothic period, integrated with late-Renaissance sculptural decoration symbolising civic autonomy. Underground, the town hall has a large wine cellar with one hall in the dimensions of the ground floor with stone pillars, which was later extended to the west and is now used as a restaurant.

In the 17th century, the Town Hall was renovated, and out of the eleven axes of the colonnade the three middle ones were accentuated by a bay construction with large rectangular windows and a high gable, an example of the so-called Weser Renaissance. An elaborate sculptural decoration in sandstone was added to the façade, representing allegorical and emblematic depictions.

The New Town Hall was the result of an architectural competition, designed by Gabriel von Seidl from Munich, and built between 1909 and 1913. The stone statue of Roland was initially erected in 1404 in representation of the rights and privileges of the free and imperial city of Bremen. The statue of Roland is associated with the Margrave of Brittany, a paladin of Charlemagne.

Criterion (iii): The Bremen Town Hall and Roland bear an exceptional testimony to the civic autonomy and sovereignty, as these developed in the Holy Roman Empire.

Criterion (iv): The Bremen Town Hall and Roland are an outstanding ensemble representing civic autonomy and market freedom. The town hall represents the medieval Saalgeschossbau-type of hall construction, as well as being an outstanding example of the so-called Weser Renaissance in Northern Germany. The Bremen Roland is the most representative and one of the oldest of Roland statues erected as a symbol of market rights and freedom.

Criterion (vi): The ensemble of the Town Hall and Roland of Bremen with its symbolism is directly associated with the development of the ideas of civic autonomy and market freedom in the Holy Roman Empire. The Bremen Roland is referred to a historical figure, paladin of Charlemagne, who became the source for the French ‘chanson de geste’ and other medieval and Renaissance epic poetry.

While the immediate surroundings of the Town Hall have survived reasonably well, the rest of the historic town of Bremen suffered serious destruction during the Second World War, and was rebuilt in new forms after the war. The Town Hall contains all elements necessary to express the property’s Outstanding Universal Value and the size is adequate to ensure complete representation. There are no adverse impacts of development and/or neglect.

The Town Hall of Bremen has had various phases in its history, starting with the first construction in Gothic style, in the early 15th century, and the substantial renovation in the Baroque period in the early 17th century. Furthermore, there have been various transformations and additions in the subsequent centuries, including the construction of the New Town Hall in the early 20th century. Taking into account this historical evolution, the Town Hall can be conceived as having historical authenticity in its form and material in respect to the various periods. It has also retained its historically established spatial relationship with the neighbouring historic buildings and market squares.

The Bremen Roland is considered to be one of the oldest and most representative still standing of such statues. It has been repaired and restored numerous times, and some of the original material has been replaced, therefore losing part of its authenticity.

The Town Hall and the Roland are under the protection of the Law for the care and protection of cultural monuments (Denkmalschutzgesetz, DSchG, 1975/ 1989)) of the Federal Land of Bremen, and are listed as historic monuments. The property has been under preservation order since 1909 (Old Town Hall) and 1973 (New Town Hall). A buffer zone has been defined to ensure the effective protection of the important views of the property. The owner of the Town Hall and the Roland is the municipality of the Free Hanseatic City of Bremen.

In the city-state of Bremen the Bremen Monuments Office (Landesamt für Denkmalpflege) is the executing agency of the aforementioned law. It functions as a specialised monument authority and has the power to decide on the approval of applications submitted by monument owners in agreement with these owners. Once an agreement is reached, the superior authority, Senator for Culture (Senator für Kultur), takes the final decision. In accordance with international conservation principles, the Town Hall has repeatedly undergone repair and maintenance. There was a comprehensive restoration of the exterior from 2001 to 2006, including re-pointing the joints and consolidating the stone parts on the façades and repair of the copper roof.

The Management Plan of the property is regularly reviewed and updated when required.