Twenty-three belfries in the north of France and the belfry of Gembloux in Belgium were inscribed in 2005, as an extension to the 32 Belgian belfries inscribed in 1999 as Belfries of Flanders and Wallonia. Built between the 11th and 17th centuries, they showcase the Roman, Gothic, Renaissance and Baroque styles of architecture. They are highly significant tokens of the winning of civil liberties. While Italian, German and English towns mainly opted to build town halls, in part of north-western Europe, greater emphasis was placed on building belfries. Compared with the keep (symbol of the seigneurs) and the bell-tower (symbol of the Church), the belfry, the third tower in the urban landscape, symbolizes the power of the aldermen. Over the centuries, they came to represent the influence and wealth of the towns. 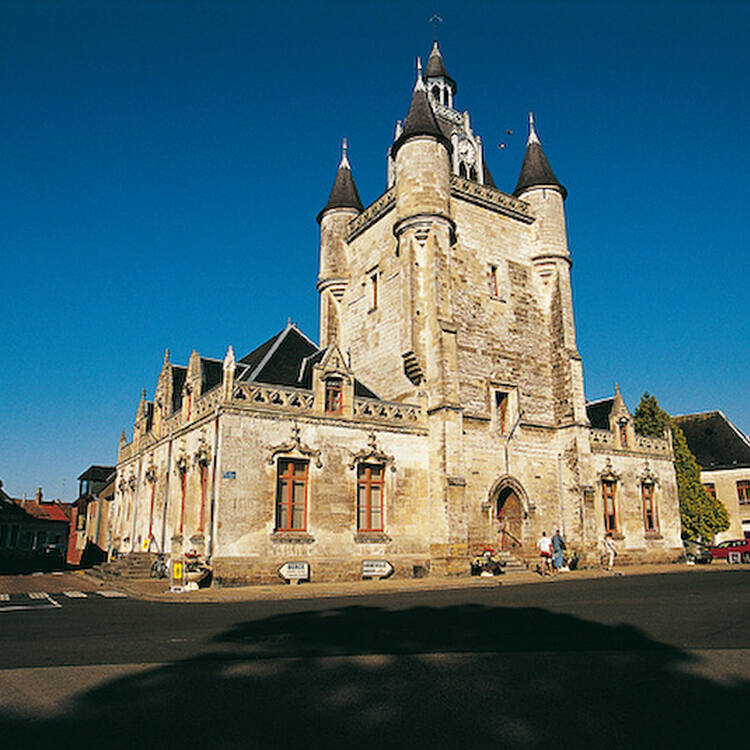 High towers built in the heart of urban areas, often dominating the principal square, the belfries are essential elements in the organization and representation of the towns to which they belong. The site inscribed on the World Heritage List comprises 33 belfries located in Belgium (26 in Flanders and 7 in Wallonia) and 23 belfries located in northern France.

A symbolic element in the landscape in ancient Netherlands and the north of France, the belfry represents, in the heart of urban areas, the birth of municipal power in the Middle Ages. A practical building housing the communal bells, conserving charters and treasures, where city council meetings were held, serving as a watch tower and a prison, the belfry has, over the centuries, become the symbol of power and prosperity of the communes.

The belfries are, together with the market hall, significant representatives of civil and public architecture in Europe. The evolution from the “seigneurial keep” to the “communal keep” is noteworthy. The church belfries bear witness to the relationship, within the community, between civil and religious power. Closely associated with the expansion and government of European towns in the Middle Ages, the belfries, by the variety of their type and the evolution of their appearance, and the complexes with which they were often associated, represent an essential element in public architecture from the 11th century onwards.

Beyond their architectural structure, the belfries present a wide typology linked both to the history of the communities, the period of construction, the materials used and the personality of their master builders. In the urban configuration, they can be isolated, attached to a market place or to a town hall. In several cases, the civil function is exercised by the church belfry. The period of construction of the belfries extends from the 11th to the 20th century, presenting a wide diversity of style, from Roman art to Art Deco.

Bearing a strong identity, the belfries have suffered much damage from armed conflict but their regular rebuilding, occurring to this day, expresses their exceptional symbolic role and the communities’ attachment to them.

Criterion (ii):  The belfries of Belgium and France are exceptional examples of a form of urban architecture adapted to the political and spiritual requirements of their age.

Criterion (iv):  The Middle Ages saw the emergence of towns that were independent of the prevalent feudal system. The belfries of Belgium and France symbolize this new-found independence, and also the links within them between the secular and religious powers.

The ensemble of belfries, a historical phenomenon unique to one region of Europe, presents a wide variety of examples throughout Flanders, Wallonia and northern France. Types, locations, period of construction, architectural styles and materials used for the belfries inscribed all bear witness to this serial property in its vast diversity.

The boundaries of the belfries are defined to fully include the constructions concerned. The associated elements (dungeons, bells and chimes, battlements, bretèches, etc.) demonstrating the function of the belfry or the communal authority are included in this definition. In addition, the property comprises fifty-six examples of belfries marking the communal movement of independence with its differences and its variants. As major and central elements of the medieval town, the belfries have conserved their importance and played a pivotal role in the development of the urban fabric right up to present times.

The belfry, a major element of the city, was also a weak point; a symbol and sometimes a watchtower, it was regularly destroyed during armed conflict. Furthermore, concerning the number of belfries inscribed (56), it is impossible to consider authenticity in material terms, referring only to their initial period of construction; one can instead consider the permanence of their existence and their symbolic value as authentic. The reconstructions following the world conflicts of the 20th century are therefore exemplary and constitute an element of authenticity of the series.

The integrity of the French edifices making up the serial property falls under the protection of the Heritage Code. As Historical Monuments, they benefit from, amongst others, a protection of their visual field (500 metre radius), the control of which is ensured by the State. Moreover, several belfries are also located within safeguarded sectors or protection zones (ZPPAUP/AVAP).

Although a serial property, the belfries have a classic management system in which the actors work according to their administrative competences or specific regulations (mostly municipalities and State services). The owner communities, users of the edifices, have an important initiative and coordination role. A Committee for the property will be established during the review of the management plans and the enhancement of the elements that are part of the serial nomination.

The belfries in the Flanders region are all listed as monuments. In addition, in some cases, they are located in a listed urban townscape.

At present, the management of the Flanders belfries is the responsibility of the local authorities. In accordance with their protected status, any intervention on the belfries themselves must be approved by the regional heritage services.

The seven belfries located in Wallonia are listed as monuments and are recorded in the list of exceptional heritage of Wallonia (list established by the Wallon Government and recording the most outstanding heritage elements of Wallonia).

Following the decision of the Wallon Government on 25 August 2011 to provide the Wallon sites inscribed on the World Heritage List with a Management Plan, a Steering Committee, a Scientific Committee and a Management Committee were established. A concertation with the representatives of the French and Flanders belfries is foreseen in this framework.

In parallel with the network of belfry towns functioning in France, the Wallon, Flanders and French representatives of the property Belfries of Belgium and France are preparing the establishment of a transboundary network.