The List Rani-ki-Vav (the Queen’s Stepwell) at Patan, ...
Print

Rani-ki-Vav, on the banks of the Saraswati River, was initially built as a memorial to a king in the 11th century AD. Stepwells are a distinctive form of subterranean water resource and storage systems on the Indian subcontinent, and have been constructed since the 3rd millennium BC. They evolved over time from what was basically a pit in sandy soil towards elaborate multi-storey works of art and architecture. Rani-ki-Vav was built at the height of craftsmens’ ability in stepwell construction and the Maru-Gurjara architectural style, reflecting mastery of this complex technique and great beauty of detail and proportions. Designed as an inverted temple highlighting the sanctity of water, it is divided into seven levels of stairs with sculptural panels of high artistic quality; more than 500 principle sculptures and over a thousand minor ones combine religious, mythological and secular imagery, often referencing literary works. The fourth level is the deepest and leads into a rectangular tank 9.5 m by 9.4 m, at a depth of 23 m. The well is located at the westernmost end of the property and consists of a shaft 10 m in diameter and 30 m deep. 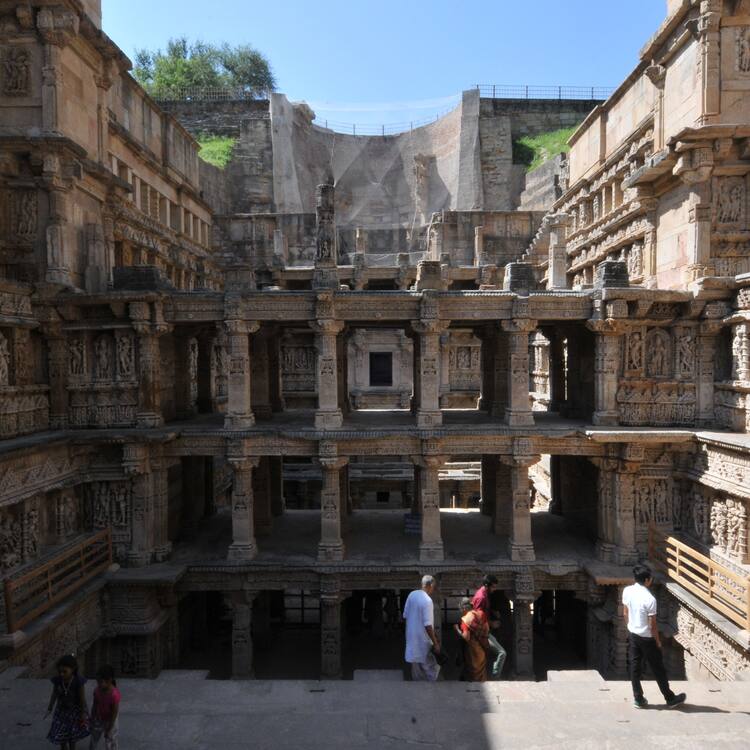 Rani-ki-Vav is an exceptional example of a distinctive form of subterranean water architecture of the Indian subcontinent, the stepwell, which is located on the banks of the Saraswati River in Patan. Initially built as a memorial in the 11th century CE, the stepwell was constructed as a religious as well as functional structure and designed as an inverted temple highlighting the sanctity of water. Rani-ki-Vav is a single-component, water management system divided into seven levels of stairs and sculptural panels of high artistic and aesthetic quality. It is oriented in an east-west direction and combines all of the principle components of a stepwell, including a stepped corridor beginning at ground level, a series of four pavilions with an increasing amount of storeys towards the west, the tank, and the well in tunnel shaft form. More than five hundred principle sculptures and over a thousand minor ones combine religious, mythological and secular imagery, often referencing literary works.

Rani-ki-Vav impresses not only with its architectural structure and technological achievements in water sourcing and structural stability, but also in particular with its sculptural decoration, of true artistic mastery. The figurative motifs and sculptures, and the proportion of filled and empty spaces, provide the stepwell’s interior with its unique aesthetic character. The setting enhances these attributes in the way in which the well descends suddenly from a plain plateau, which strengthens the perception of this space.

Criterion (i): Rani-ki-Vav (The Queen’s Stepwell) at Patan, Gujarat, illustrates an example of the artistic and technological height of stepwell tradition. It has been decorated with religious, mythological and at times secular sculptures and reliefs, illustrating a true mastery of craftsmanship and figurative expression. The stepwell represents an architectural monument of human creative genius in its variety of motifs and its elegance of proportions, which frame an intriguing space, both functional and aesthetic.

Criterion (iv): Rani-ki-Vav is an outstanding example of a subterranean stepwell construction and represents a prime example of an architectural type of water resource and storage system which is widely distributed across the Indian subcontinent. It illustrates the technological, architectural and artistic mastery achieved at a stage of human development when water was predominantly resourced from ground water streams and reservoirs through access of communal wells. In the case of Rani-ki-Vav, the functional aspects of this architectural typology were combined with a temple-like structure celebrating the sanctity of water as a venerated natural element and the depiction of highest-quality Brahmanic deities.

Rani-ki-Vav is preserved with all its key architectural components and, despite missing pavilion storeys, its original form and design can still be easily recognized. A majority of sculptures and decorative panels remain in-situ and some of these in an exceptional state of conservation. Rani-ki-Vav is a very complete example of the stepwell tradition, even though after geotectonic changes in the 13th century it does no longer function as a water well as a result of the change to the Saraswati River bed. It was however the silting of the flood caused during this historic event, which allowed for the exceptional preservation of Rani-ki-Vav for over seven centuries.

All components including the immediate surrounding soils which adjoin the vertical architecture of the stepwell are included in the property. In terms of intactness, the property does not seem to have experienced major losses since its flooding and silting in the 13th century. However, Patan like many Indian urban centres is experiencing rapid urban growth and the western expansion of the city towards Rani-ki-Vav has to be carefully controlled to protect the integrity of the property in the future.

Rani-ki-Vav has a high level of authenticity in material, substance, design, workmanship and, to a certain extent, atmosphere, location and setting. While it maintained its authentic material and substance, it also required some punctual reconstructions for structural stability. In all instances reconstructed elements were only added where structurally required to protect remaining sculpture, and they are indicated by smooth surfaces and a lack of decoration which can be easily distinguished from the historic elements. Around the outer terrace at ground level, slopes of smooth descent, a so-called sacrificial terrace, were created to prevent soil erosion following stronger rain falls. Unfortunately the Rani-ki-Vav cannot retain authenticity in use and function as a result of the altered ground water levels following the relocation of Saraswati River.

The property is protected as a national monument by the provisions of the Ancient Monuments and Archaeological Sites Act of 1958 amended by its revision of 2010 and accordingly administrated by the Archaeological Survey of India (ASI). It is formally designated as an ancient monument of national importance and surrounded by a protective non-development zone of 100m to all sides of the architectural structure. The buffer zone has been included in the adopted Second Revised Development Plan, which ensures its protection from any inappropriate development.

The management of the property is under the sole responsibility of the ASI and steered by a Superintending Archaeologist with an in-house team of ASI archaeologists working and monitoring on site. Any proposed interventions require scientific review by the superintending archaeologist who may be advised by experts in a specific field. A management plan has been prepared by the ASI for the property and its implementation commenced in 2013.

The approaches taken to risk preparedness and disaster management planning should be further developed given that Rani-ki-Vav is situated in an earthquake prone area. Few interpretation facilities exist on site and the only information sources are two stone panels erected by the ASI. The Rani-ki-Vav would benefit from a more holistic concept to visitor management including local community concerns and revenue models. An information centre with food court and office building is planned on site but its location needs to be selected with care as some directions, in particular the western direction are more vulnerable with regard to developments which may change the view perspectives and settings of the property. For any future intervention in the property or buffer zone, Heritage Impact Assessments in accordance with the ICOMOS guidance for Heritage Impact Assessment on World Cultural Heritage properties should be carried out before any plans are approved and implemented.