Partly built starting in 1145, and then reconstructed over a 26-year period after the fire of 1194, Chartres Cathedral marks the high point of French Gothic art. The vast nave, in pure ogival style, the porches adorned with fine sculptures from the middle of the 12th century, and the magnificent 12th- and 13th-century stained-glass windows, all in remarkable condition, combine to make it a masterpiece. 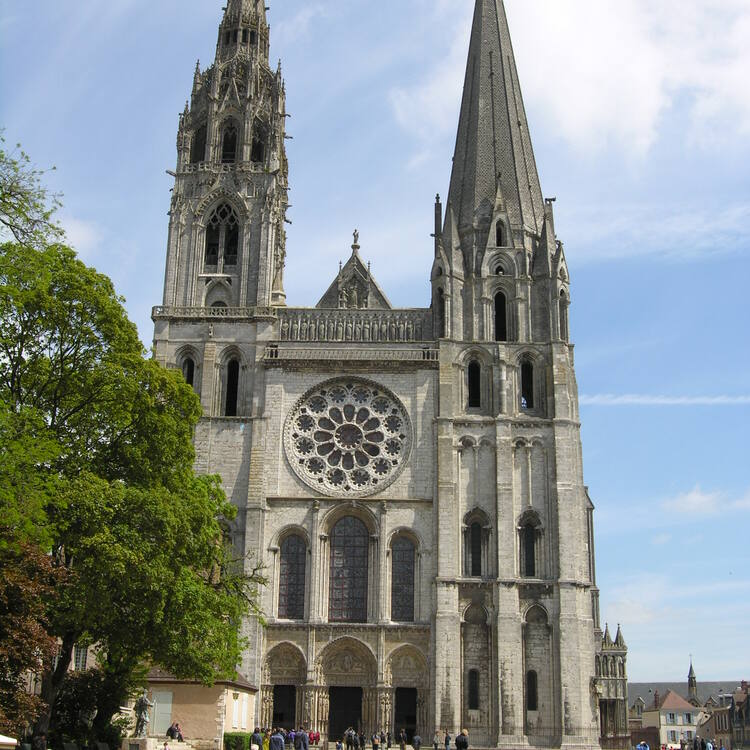 Notre-Dame de Chartres Cathedral, located in the Centre-Val-de-Loire region, is one of the most authentic and complete works of religious architecture of the early 13th century. It was the destination of a pilgrimage dedicated to the Virgin Mary, among the most popular in all medieval Western Christianity. Because of the unity of its architecture and decoration, the result of research of the first Gothic era, its immense influence on the art of Middle Age Christianity, Chartres Cathedral appears as an essential landmark in the history of medieval architecture. The outstanding stained-glass ensemble, monumental statuary of the 12th and 13th centuries and the painted decorations miraculously preserved from the ravages of humankind and time, make Chartres one of the most admirable and the best-preserved examples of Gothic art.

The west façade built around the middle of the 12th century, with its three portals whose splays are decorated with statue columns (Royal Portail), its two towers, its southern spire and its three large incomparable stained-glass windows, comprise an authentic and complete example that remains with us of this art created at St Denis, and which marked the advent of an original mode of plastic expression, known as the Gothic style.

A little later, the nave and the choir, reconstructed as of 1194, effected for the first time an architectural formula which would be widely employed throughout the 13th century.

The monumental sculptures of Chartres Cathedral are valued both for their abundance and for their quality: the large ensembles, reliefs and statues, of the Royal Portail at the entrance to the nave, the six portals and two porches dating from 1210 at the north and south entrances to the transept, offer a complete panorama of Gothic sculpture from the moment when it broke from Romanesque traditions to attain the subtle balance of idealism and realism that characterises its apogee. In this cathedral, seat of a renowned school, technical and artistic mastery were at the service of a highly developed iconographic science.

Finally, Chartres Cathedral has almost totally conserved its homogeneous decor of stained-glass windows executed between approximately 1210 and 1250. To this must be added the three stained-glass windows of the 12th century above the Royal Portail and the large roses of the 13th century on the three façades: on the west, the Last Judgement; on the north, the Glorification of the Virgin; on the south, the Glorification of Christ.

Criterion (i): Built fairly rapidly and in nearly one stride, Chartres Cathedral, owing to the unity of its architecture and stained-glass, sculptured and painted decoration, constitutes the complete and perfected expression of one of the most characteristic aspects of medieval art.

Criterion (ii): Chartres Cathedral has exercised considerable influence on the development of Gothic art in France and beyond. The architects of the Cathedrals of Reims, Amiens and Beauvais have only enriched the fundamental design of Chartres, that was imitated in Cologne in Germany, Westminister in England and Leon in Spain. In the domain of stained glass, the influence of the Chartres workshop ranged widely from Bourges, Sens, Le Mans, Tours, Poitiers, Rouen, Canterbury, through spreading or diffusion of works.

Criterion (iv): Chartres Cathedral is both a symbol and a basic building type. It is the most elucidating example one could choose to define the cultural, social and aesthetic reality of the Gothic cathedral.

Chartres Cathedral was considered as a model from the time of its construction, due to the novelty and perfection of the technical and aesthetic parts that were adopted. All the elements that made it an architectural reference, in particular its nave and choir, remain intact.

The scuptured decor (portals and rood screen elements) offer a complete panorama of the Gothic style. The cathedral has also preserved outstanding stained glass from the middle of the 12th century as well as almost the totality of its homogeneous decor of stained glass that comprises the greatest ensemble of stained glass from the first half of the 13th century. Finally, the interior restorations have revealed the painted decor of the 13th century, constituting an almost entirely preserved false-stone work.

Chartres Cathedral occupies a remarkable position in the Beauce Plain. Its silhouette, visible for more than 25 km around, constitutes a particularly clear marker in the landscape. A true meeting point emblematically confirming the remarkable relation maintained by the architectural work with the surrounding site, this perception of the cathedral “between sky and earth” was evoked by many illustrous artists and writers.

Chartres Cathedral presents outstanding authenticity, both through its structure and its decor, notably the portals and their sculptured decoration having undergone little alteration, and the exceptional ensemble of stained-glass of the 13th century, which are the object of constant conservation measures, and are today in a remarkable state of conservation. The only important alterations undergone by the edifice are the demolition of the rood screen in the 17th century and the roof fire of 1836. The metal structure, put up in 1837 to replace the roof, is a remarkable element of the 19th century that fully participates in the values of the edifice.

Property of the State, Chartres Cathedral is listed in its totality as Historic Monument since 1862. As such, it enjoys conservation measures financed and directly implemented by the Ministry of Culture and Communication. It is included in the outstanding heritage site of the city of Chartres with a safeguarding and enhancement plan in force. Legally recognized as a Catholic building, it cannot be used for any other worship.

The management of the property is ensured by the State, the religious authorities, the National Monuments Centre and the City of Chartres. The important visitor flow in this dense urban environment does not negatively affect the integrity and the authenticity of the property due to the efficient coordination of all these actors. However, the relation between the cathedral and its landscape has now become vulnerable in the face of development pressures.

Once in place, the management plan will inscribe the landscape dimension of the cathedral into the territorial planning tools.