James Island and Related Sites present a testimony to the main periods and facets of the encounter between Africa and Europe along the River Gambia, a continuum stretching from pre-colonial and pre-slavery times to independence. The site is particularly significant for its relation to the beginning of the slave trade and its abolition. It also documents early access to the interior of Africa. 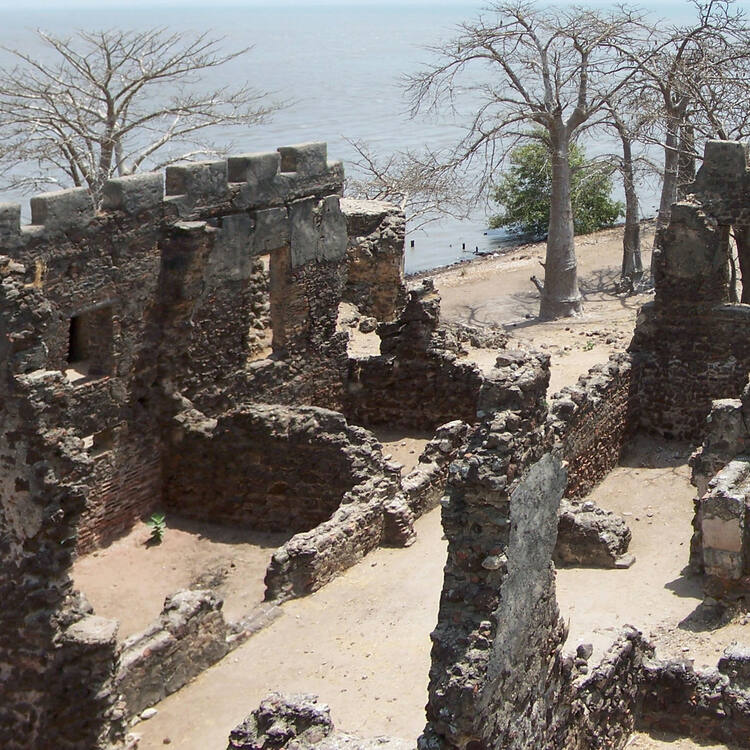 Kunta Kinteh Island is a small island in the Gambia River which joins the Atlantic Ocean. Its location in the middle of the river made it a strategic place to control the waterway. Visited by explorers and merchants in their search for a sea route to India it became one of the first cultural exchange zones between Africa and Europe. By 1456 the Island had been acquired by Portugal from local rulers and the construction of a fort began.

Kunta Kinteh Island and Related Sites form an exceptional testimony to the different facets and phases of the African-European encounter, from the 15th to the 19th centuries. The River Gambia was particularly important forming the first trade route to the inland of Africa. The site was already a contact point with Arabs and Phoenicians before the arrival of the Portuguese in the 15th century. The region forms a cultural landscape, where the historic elements are retained in their cultural and natural context. The properties illustrate all the main periods and facets of the various stages of the African-European encounter from its earliest moments in the 15th Century through the independence period.

The specific location of Kunta Kinteh Island and its Related Sites, at the mouth of the Gambia River, is a tangible reminder of the story of the development of the Gambia River as one of the most important waterways for trade of all kinds from the interior to the Coast and beyond. The specific, important role of the site in the slave trade, both in its propagation and its conclusion, makes Kunta Kinteh Island and it Related Sites an outstanding memory of this important, although painful, period of human history.

The property includes Kunta Kinteh Island Fort and a series of sites associated with the early European occupation of the African continent. The ensemble has seven separate locations: the whole of Kunta Kinteh Island, the remains of a Portuguese Chapeland of a colonial warehouse (CFAO Building) in the village of Albreda, the Maurel Frères Building in the village of Juffureh, the remains of the small Portuguese settlement of San Domingo, as well as Fort Bullen and the Six-Gun Battery. Fort Bullen and the Six-Gun Battery are at the mouth of the Gambia River, whilst Kunta Kinteh Island and the other sites are some 30 km upstream.

The Six-Gun Battery (1816) and Fort Bullen (1826), located on both sides of the mouth of the River Gambia came much later than Kunta Kinteh Island and were built for the specific intent of thwarting the trade in slaves once it had become illegal in the British Empire after the passing of the Abolition Act in 1807. They are the only known defensive structures in the region to have been built specifically to stop slaving interests. The other fortifications of the region (including Kunta Kinteh Island), were constructed as a means of enhancing and controlling the trade in slaves (and commodities) rather than stopping it. These two military positions allowed the British to take full control of the River Gambia, eventually paving the way for the establishment of colonial government, a period well-illustrated by many colonial buildings in Banjul and the Governor’s Rest House at Fort Bullen. Finally, Fort Bullen shows evidence of its re-use during the Second World War (1939-1945) as a strategic observatory and artillery post. This later period illustrates yet another European rivalry that spread to the African continent.

Criterion (iii): Kunta Kinteh Island and related sites on the River Gambia provide an exceptional testimony to the different facets of the African-European encounter, from the 15th to 20th centuries. The river formed the first trade route to the inland of Africa, being also related to the slave trade.

Criterion (vi): Kunta Kinteh Island and related sites, the villages, remains of European settlements, the forts and the batteries, were directly and tangibly associated with the beginning and the conclusion of the slave trade, retaining its memory related to the African Diaspora.

The six parts of the serial nomination together present a testimony to the main periods and facets of the Afro-European encounter along the River Gambia, a continuum that stretched from pre-colonial and pre-slavery times to the period of independence and in particular to the beginning and the abolition of the slave trade, as well as documenting the functions of the early access route to the inland of Africa. The six sites encompass all the key remains.

All the sites except the CFAO and Maurel Frères Buildings are ruins. The CFAO Building has been restored and provided with adequate sea defence. The Maurel Frères Building was restored in 1996 and is in a good state of conservation. The Portuguese chapel and San Domingo are in a state of ruins, but these have been stabilized, with the most endangered parts reinforced during 2000.

The isolated position of Kunta Kinteh Island in the river has conserved its setting to the present day. Fort Bullen is also bordered by the river on one side and a large open tract of land on the other, naturally serving as a buffer zone and helping to preserve its setting. It is in a relatively good state of conservation, though the wall on the seaward side is suffering from sea erosion. Parts have collapsed and 20 metres were rebuilt in 2000. The Six-Gun Battery is in a good state of conservation. The ruined sites need on-going maintenance if they are not to deteriorate over time.

Kunta Kinteh Island Fort was subject to destruction on numerous occasions. Since the last time by the French, in 1779, it has remained a ruin with only minor attempt at consolidation and minimizing the effects of sea erosion. The Island is a landmark for all concerned with the slave trade, especially the local community and Africans in the Diaspora. Apart from a short period of re-use during the Second World War, Fort Bullen and the Six-Gun Battery were similarly abandoned in the late 19th century. At San Domingo there are very few visible remains, but the area has considerable potential for archaeological research. The ruins that convey the Outstanding Universal Value are extremely vulnerable to erosion. At the time of inscription the ruined sites were seen to be part of a wider cultural landscape that needed protection in order to protect the setting of the sites and to allow them to be understood.

Kunta Kinteh Island, Fort Bullen and all the significant historic buildings in the Albreda-Juffureh complex are legally protected as National Monuments (1995) under the National Council for Arts and Culture Act, 1989 (revised 2003). The proclamation instrument also establishes a buffer zone for all the sites that should be kept free of incompatible developments with adverse effects on their setting. As National Monuments the historic structures are under the custodianship of the National Centre for Arts and Culture (NCAC) who are responsible for their conservation and upkeep. Day to day management rests with the Directorate of Cultural Heritage of the NCAC, who employ site attendants and caretakers. The Six-Gun Battery is located within the State House grounds and is protected by the Office of the President. The sites also have a 5-year management plan that sets out what is acceptable at the individual sites and at national level. This plan was prepared as a result of the joint effort of ten different national and local organisations, supported by the Africa 2009 programme.

The financial resources required for the management and maintenance of the sites are relatively scarce, and come mainly from entrance fees. Every three months, the Head of the Museums and Monuments section of the NCAC performs a physical inspection of the sites. This condition assessment is carried out with a representative of the local stakeholders and, if possible, with a local guide. A brief report is prepared after each visit and these are summarized in an annual report.

Since 1996 the Gambia Government, through its Department of State for Tourism and Culture, has instituted an annual event called the ‘International Roots Homecoming Festival’. Considered to be a “heritage week”, the main aim is to attract visitors from the African Diaspora. The festival usually devotes a daylong spiritual pilgrimage to Kunta Kinteh Island and the Albreda-Juffureh area. To the visitors the property has symbolic and emotional significance, as a visit to Kunta Kinteh Island is a pilgrimage to their roots. As a piece of historical evidence, much can be learnt from the Island, and it already forms part of the history and social studies syllabus in Gambian schools.

The property contains very fragile ruins that need to be protected and conserved as the tangible elements that convey Outstanding Universal Value. There needs to be ongoing maintenance monitoring and conservation to allow these ruins to have the best chance of survival and be robust enough to withstand the onslaughts of nature. 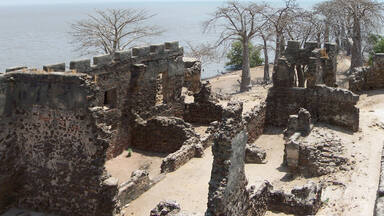 Community Engagement on World Heritage and Youth Empowerment in the Gambia: a Symposium
29 Sep 2022 - 6 Oct 2022