Sceilg Mhichíl is an outstanding, and in many respects unique, example of an early religious settlement deliberately sited on a pyramidal rock in the ocean, preserved because of a remarkable environment. It illustrates, as no other property can, the extremes of a Christian monasticism characterizing much of North Africa, the Near East, and Europe. 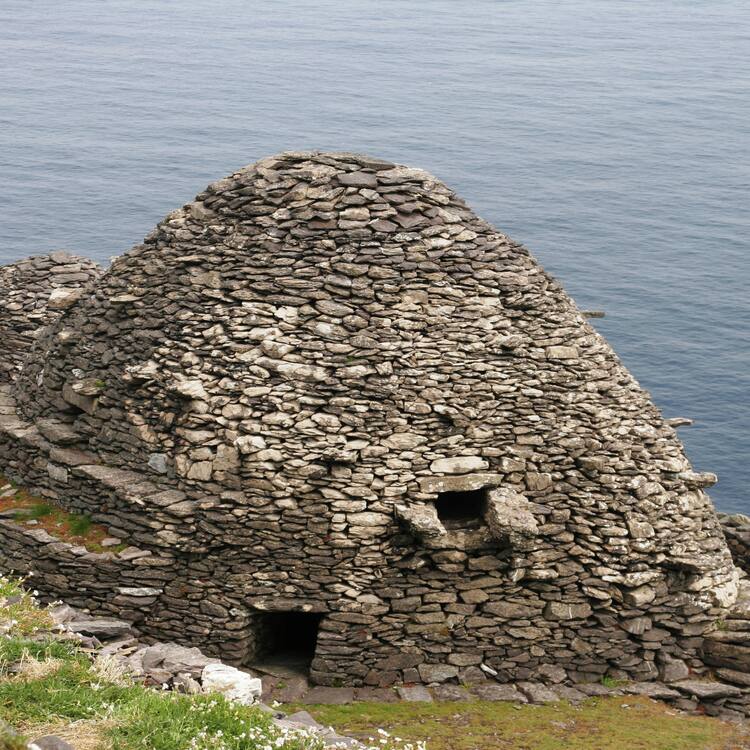 Sceilg Mhichíl, also known as Skellig Michael, was inscribed on the World Heritage List in 1996. The island of Sceilg Mhichíl lies at the extreme north-western edge of Europe, rising from the Atlantic Ocean almost 12 km west of the lveragh Peninsula in County Kerry. It is the most spectacularly situated of all Early Medieval island monastic sites, particularly the isolated hermitage perched on narrow, human-made terraces just below the South Peak.

Faulting of Devonian sandstone has created a U-shaped depression known today as “Christ’s Valley” or “Christ’s Saddle” 130 m above sea level in the centre of the island, and this is flanked by two peaks, that to the north-east rising to 185 m and that to the west-south-west, 218 m. The rock is deeply eroded and weathered, owing to its exposed position, but it is almost frost-free.

The three island landing points communicate by flights of steps with the principal monastic remains, which are situated on a sloping shelf on the ridge running north-south on the north-eastern side of the island; the hermitage is on the steeper South Peak.

The monastery, its cells and oratories and the even more precipitous structures of the South Peak Hermitage symbolise both the arrival and spread of Christianity and emerging literacy of lands so remote that they were beyond the frontiers of the Roman Empire and the ultimate reach of organised monasticism which spread from Egypt by land and sea through Italy and Gaul to Britain and Ireland in a mere two centuries (the 5th and 6th). The date of the foundation of the monastery on this island is not known. It was dedicated to St Michael somewhere between 950 and 1050.

All the physical components of the ideal small monastery exist on Skellig: isolation, difficulty in accessing the site, living spaces, buildings for worship and plots for food production. Here, amongst dramatic and unique settings, the indigenous stone architecture of a past millennium is intact and in a relatively stable condition. A clear evolution of dry stone masonry techniques is evident so this site offers a unique documentation of the development of this type of architecture and construction.

Sceilg Mhichíl is also one of Ireland’s most important sites for breeding seabirds, both for the diversity of the species and the size of the colonies it supports.

Criterion (iii): Sceilg Mhichíl illustrates, as no other property can, the extremes of a Christian monasticism characterizing much of North Africa, the Near East and Europe.

Criterion (iv): Sceilg Mhichíl is an outstanding and in many respects a unique example of an early religious settlement deliberately sited on a pyramidal rock in the ocean, preserved because of a remarkable environment.

In the case of Sceilg Mhichíl, there are two types of integrity: structural-historical integrity, in that the structures have evolved over time; and visual-aesthetic integrity, in other words, the iconic image that has been retained.

The Monastery and Hermitage on Sceilg Mhichíl represent a unique artistic achievement. They provide an outstanding example of a perfectly preserved Early Medieval monastic settlement, and the architectural ensemble is unique because of its level of preservation. It illustrates a significant stage in building history. The dramatic topography of the island and the integration of the various monastic elements within the landscape reinforce the uniqueness of the property. The presence of the monks on the island for such a long period has imbued the place with a strong sense of spirituality.

The sense of remoteness is reinforced by the island’s distance from the mainland and its frequent inaccessibility particularly between the months of October and May.

Sceilg Mhichíl is approximately 21.9 ha in size. This area encapsulates the attributes for which the property was inscribed on the World Heritage List. The World Heritage property boundary is drawn tightly to the island, with a buffer zone formed naturally by the Atlantic Ocean.

The level of authenticity is very high. Sceilg Mhichíl, because of its isolation, has been protected from alterations and adaptations, other than those of the 19th century lighthouse builders. Most of the structures within the monastery are almost complete, as are the stepped terraces and the paved areas. In addition to individual features, the overall layout is almost fully intact.

The island’s isolation has helped preserve and protect it from agents of destruction that have adversely affected most other sites of the period. Alterations were made during the lighthouse builders’ occupation in the 1820s, but it has been possible to document these through research and on-site investigation. Due to the vicissitudes of time, the extreme environment and increased visitor pressure, a programme of conservation works, structural consolidation and repair has been in train since the late 1970s. The philosophy underpinning this work is that all original features are retained and conserved in situ.

Conservation work began in the 1880s when the monuments came into State guardianship; these included the rebuilding of part of the upper retaining wall along St Michael’s Church and some minor repairs to the enclosure walls, where collapse had occurred. Other minor works were carried out in the 1930s. The current programme of preservation and conservation began in 1978 with an objective of the stabilization of the steps, retaining walls and individual structures. All this work was carefully recorded by survey and photography, and revealed a surprising amount of evidence about the monastic structures and layout.

Major conservation works began in 1986 which concentrated on the repair and consolidation of the terraces and their retaining walls. This work was carried out in tandem with archaeological investigations.

The protection and conservation of Sceilg Mhichíl is provided by a range of national legislation, international guidelines, statutory and non-statutory guidance. These provisions include the National Monuments Acts 1930-2004, the Wildlife Act 1976 and 2000, Planning and Development Acts, various EU directives and international charters.

The management of Sceilg Mhichíl is in the hands of the Office of Public Works. This State Office has on its staff qualified conservation architects and engineers; skilled craftspeople are employed to carry out consolidation and conservation works. The State Exchequer provides the funding needed for maintenance, management and conservation. Archaeological input to the conservation and presentation of the property is provided by the National Monuments Service of the Department of Arts, Heritage, Regional, Rural and Gaeltacht Affairs, while management is carried out under a service level agreement between the Department and the Office of Public Works.

The Office of Public Works has had a full-time presence on the island during the visitor season since the current preservation programme began in 1978. At that time the lighthouse was still staffed, but it is now an unoccupied station. An official guide service was introduced in 1987 with a view to regulating the numbers of visitors to the site during peak visiting hours and preserving the monuments. Since 2007 the Office of Public Works has set out, on an annual basis, the period during which, weather permitting, a guide service is available on the island. This is also the period of the ‘season’ referred to in the permits issued annually to boatmen and boatwomen to land visitors on the island. In the interest of the continued protection of the island and to prevent damage to the monuments and particularly for reasons of health and safety of visitors, access to the island outside of the defined period is not permitted. Access to the island by private craft is discouraged by the Office of Public Works. 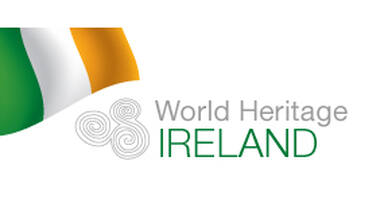