The List Caves of Aggtelek Karst and Slovak Karst
Print

The variety of formations and the fact that they are concentrated in a restricted area means that the 712 caves currently identified make up a typical temperate-zone karstic system. Because they display an extremely rare combination of tropical and glacial climatic effects, they make it possible to study geological history over tens of millions of years. 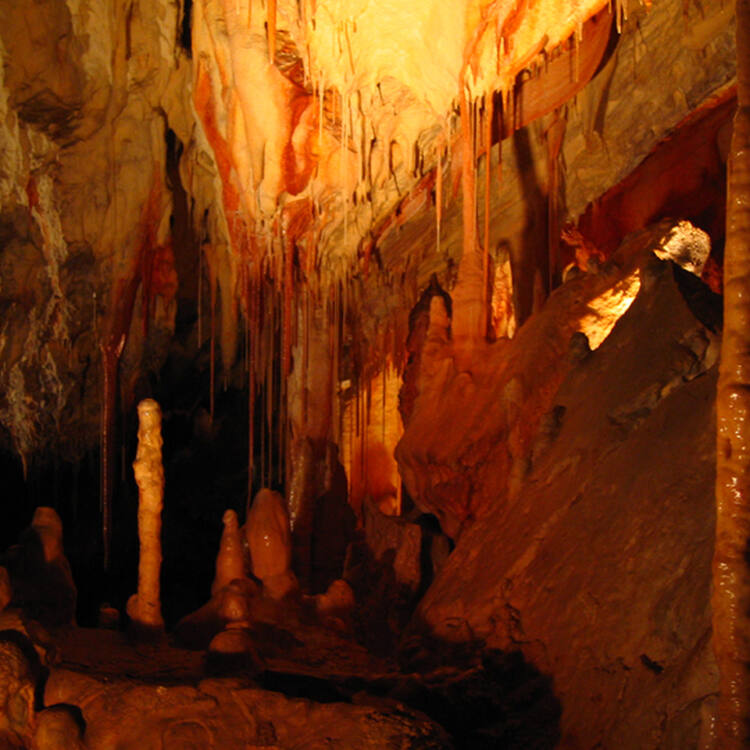 The Caves of Aggtelek Karst and Slovak Karst are outstanding for the large number of complex, diverse and relatively intact caves concentrated into a relatively small area. Located at the north-eastern border of Hungary and the south-eastern border of Slovakia, this exceptional group of 712 caves, recorded at time of inscription, lies under a protected area of 56,651 ha and a larger buffer zone. Today more than 1000 caves are known. Karst processes have produced a rich diversity of structures and habitats that are important from a biological, geological and paleontological point of view. While the karst continues to develop in mountains of medium height and under temperate climate conditions, sediments and fossil landforms provide ample evidence of Late Cretaceous and early Tertiary subtropical and tropical climatic conditions as well as periglacial denudational activity during the Quaternary. Shaped over tens of millions of years, the area provides an excellent demonstration of karst formation during both tropical and glacial climates, which is very unusual and probably better documented here than anywhere else in the world.

The most significant cave system in the property is that of Baradla-Domica, a cross-border network richly decorated with stalagmites and stalactites, which is an important active stream cave in the temperate climatic zone and a Ramsar site. Also worth mentioning is the Dobsina Ice Cave, one of the most beautiful in the world. Among the ice-filled caves in the property, the Silica Ice Cave is located at the lowest latitude within the temperate climatic zone. The close proximity of many different types of caves of diverse morphology, including vadose and epiphreatic stream caves, vertical shafts and hypogenic or mixing corrosion caves, as well as important archaeological remains, makes the property an outstanding subterranean museum. Its ecosystems provide habitat for more than 500 troglobiont or troglophil species, including some which are endemic. The interactions between geological karst processes occurring on the surface with those occurring beneath make this area a natural field laboratory.

Criteria (viii): The property Caves of Aggtelek and Slovak Karst, while typical of many karst localities in Europe, is distinctive in its great number (with 712 recorded at time of inscription) of different types of caves found in a concentrated area. Geological processes causing karst features to be buried by sediment and then later reactivated or exhumed provide evidence pertaining to the geologic history of the last tens of millions of years. Relicts of pre-Pleistocene karst (i.e. more than about 2 million years old) are very distinct in the area, and many of them show evidence for sub-tropical and tropical climate forms. These include rounded hills that are relicts of tropical karst later modified by Pleistocene periglacial weathering. This suite of paleokarst features, showing a combination of both tropical and glacial climates, is very unusual and is probably better documented in the Slovak Karst than anywhere else in the world.

More than 99% of the Caves of Aggtelek Karst and Slovak Karst is preserved in its original natural condition and is well protected. The other 1% has been substantially modified as “show-caves” to allow human use, which includes 300,000 visitors annually. All of the caves are State-owned and the land above them has protected status. The cave system is exceptionally sensitive to environmental changes, including agricultural pollution, deforestation and soil erosion. Maintenance of the integrity of active geological and hydrological processes (karst formation and the development or evolution of stalagmites and stalactites) requires integrated management of the entire water catchment area.

All of the caves are State-owned and their protection is guaranteed by the Act no. LIII. 1996 on nature protection in Hungary and by the Slovak Constitution no. 90/2001, and the Act of Nature Protection and Landscape no. 543/2002 in Slovakia, irrespective of ownership or protection status of the surface areas. However, in both countries most of the surface area of the property has National Park designation. Aggtelek Karst is administered by the Aggtelek National Park Directorate and the Slovak Karst is managed by the Slovak Karst National Park Directorate (surface) and Slovak Caves Administration (caves). These administrative bodies carry out joint projects including research, protection and monitoring.

The main protection and management requirement is to ensure strict control over surface activities in order to avoid agricultural pollution, deforestation and soil erosion that may affect the quality and quantity of water infiltrating the karst. The property needs to be monitored to ensure that the water quality in the catchment area of the caves is appropriate (including controlling the use of agricultural chemicals) and to prevent large-scale soil erosion and the infiltration of humus and alluvial soil into the caves. This means that the establishment of buffer zones where appropriate, the completion of sewage systems, and the elimination of illegal garbage disposal and building debris in the surrounding settlements are necessary.

Levels of sustainable tourism need to be determined with the involvement of local communities, and monitoring systems need to be completed and implemented. Further research and exploration is needed with regard to the interconnection of the karst cave system. Long-term tasks are related to the need to mitigate impacts caused by climate change, such as extreme changes in water levels. The transboundary property requires a harmonised and coordinated management approach in which the management plan is regularly reviewed.