Rapa Nui, the indigenous name of Easter Island, bears witness to a unique cultural phenomenon. A society of Polynesian origin that settled there c. A.D. 300 established a powerful, imaginative and original tradition of monumental sculpture and architecture, free from any external influence. From the 10th to the 16th century this society built shrines and erected enormous stone figures known as moai , which created an unrivalled cultural landscape that continues to fascinate people throughout the world. 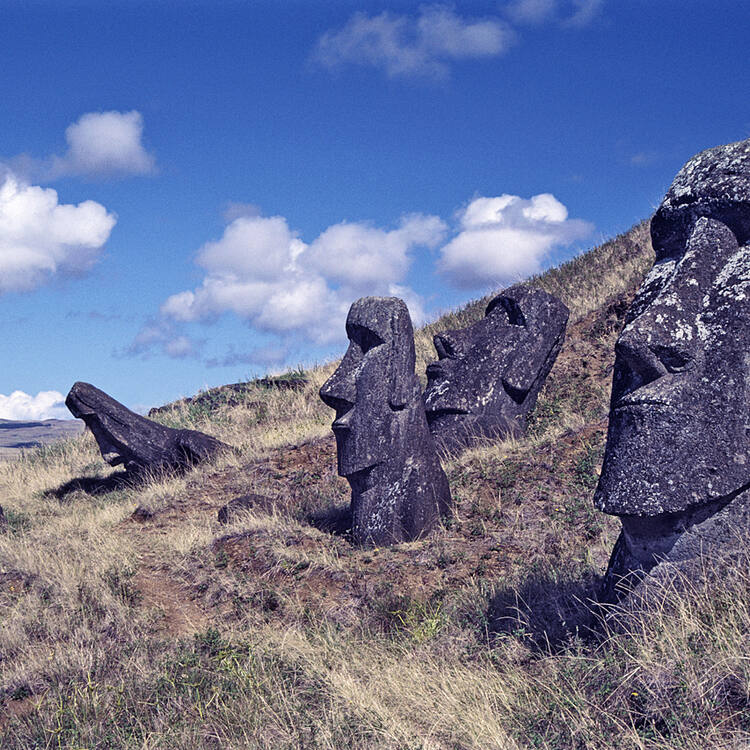 Rapa Nui National Park is a protected Chilean wildlife area located in Easter Island, which concentrates the legacy of the Rapa Nui culture. This culture displayed extraordinary characteristics that are expressed in singular architecture and sculpture within the Polynesian context. Easter Island, the most remote inhabited island on the planet, is 3,700 kilometres from the coast of continental Chile and has an area of 16,628 hectares while the World Heritage property occupies an area of approximately seven thousand hectares, including four nearby islets.

The island was colonized toward the end of the first millennium of the Christian era by a small group of settlers from Eastern Polynesia, whose culture manifested itself between the eleventh and seventeenth centuries in great works such as the ahu –ceremonial platforms- and carved moai - colossal statues- representing ancestors. Rapa Nui National Park most prominent attributes are the archaeological sites.  It is estimated that there are about 900 statues, more than 300 ceremonial platforms and thousands of structures related to agriculture, funeral rites, housing and production, and other types of activities.  Prominent among the archaeological pieces are the moai that range in height from 2 m to 20 m and are for the most part carved from the yellow–brown lava tuff, using simple picks (toki) made from hard basalt and then lowered down the slopes into previously dug holes. There are many kinds of them and of different sizes: those in the process of being carved, those in the process of being moved to their final destinations –the ahu-, those being torn down and erected.  The quarries (Rano Raraku and others) are invaluable evidence of the process of their carving.  The ahu vary considerably in size and form; the most colossal is the Ahu Tongariki, with its 15 moai.  There are certain constant features, notably a raised rectangular platform of large worked stones filled with rubble, a ramp often paved with rounded beach pebbles, and levelled area in front of the platform. Also extremely valuable are the rock art sites (pictographs and petroglyphs), which include a large variety of styles, techniques and motifs. Other archaeological sites are the caves, which also contain rock art.  There is also a village of ceremonial nature named Orongo which stands out because of its location and architecture.  While it has not attracted as much attention, the housing and productive structures are of extreme interest.

According to some studies, the depletion of natural resources had brought about an ecological crisis and the decline of the ancient Rapa Nui society by the 16th century, which led to decline and to the spiritual transformation in which these megalithic monuments were destroyed.  The original cult of the ancestor was replaced by the cult of the man-bird, which has as exceptional testimony the ceremonial village of Orongo, located at the Rano Kau volcano.  Fifty-four semi-subterranean stone-houses of elliptical floor plans complement this sacred place, profusely decorated with petroglyphs alluding to both the man-bird and fertility.  This cult would see its end in the middle of the nineteenth century.

Colonization, the introduction of livestock, the confinement of the original inhabitants to smaller areas, the dramatic effect of foreign diseases and, above all, slavery, reduced the population of Rapa Nui to little more than a hundred.  Currently, the island is inhabited by descendants of the ancient Rapa Nui as well as immigrants from diverse backgrounds, accounting for a significant mixed population.

Critère (i): Rapa Nui National Park contains one of the most remarkable cultural phenomena in the world. An artistic and architectural tradition of great power and imagination was developed by a society that was completely isolated from external cultural influences of any kind for over a millennium.

Criterion (iii): Rapa Nui, the indigenous name of Easter Island, bears witness to a unique cultural phenomenon. A society of Polynesian origin that settled there c. A.D. 300 established a powerful, imaginative and original tradition of monumental sculpture and architecture, free from any external influence. From the 10th to the 16th century this society built shrines and erected enormous stone figures known as moai, which created an unrivalled landscape that continues to fascinate people throughout the world.

Criterion (v): Rapa Nui National Park is a testimony to the undeniably unique character of a culture that suffered a debacle as a result of an ecological crisis followed by the irruption from the outside world. The substantial remains of this culture blend with their natural surroundings to create an unparalleled cultural landscape.

The Rapa Nui National Park covers approximately 40% of the island and incorporates an ensemble of sites that is highly representative of the totality of the archaeological sites and of the most outstanding manifestations of their numerous typologies. The integrity of the archaeological sites has been preserved, but the conservation of materials is a matter of great concern and scientific research. The management and conservation efforts, still insufficient, focus on addressing anthropic factors and the effects of weathering, both on the material -volcanic lava and tuff- and on the stability of structures.  Progress has been made in the closure of areas, monitoring and the layout of roads so as to maintain the visual integrity of the landscape.

An increase has been observed in cattle that wander illegally inside the Park limits.  In terms of invasive vegetation, certain species have proliferated and have had an impact on the landscape.  At the same time, they have adversely affected the structural stability which is being addressed through the management of the sites.

The Rapa Nui National Park continues to exhibit a high degree of authenticity because there has been little intervention since virtual abandonment of the area in the later 19th century.  A number of restorations and reconstructions of ahu have been made on the basis of strictly controlled scientific investigations, and there has been some re-erection of fallen moai, with replacement of the red stone headdresses, but these do not go beyond the permissible limits of anastylosis.

Authenticity is being maintained and conservation interventions are consistent with the Outstanding Universal Value of the property, with prevailing sense of respect for the historical transformation of the Rapa Nui culture, which, in a context of deep crisis, toppled the moai.  In this respect, it is important to consider that the Rapa Nui National Park must provide an account of the various stages of the Rapa Nui civilization, not excluding that of its crisis.

The Rapa Nui National Park has two official protections.  On one hand, since 1935 it has been a national park, administered by the National Forest Service of Chile (CONAF).  On the other hand, the entire island was declared a National Monument in 1935 and the same was done with the islets adjacent to Easter Island in 1976.  The property enjoys a solid legal and institutional framework for protection and management.  There are two institutions responsible for this activity that coordinate with each other (National Monuments Council and CONAF) and with the community for conservation and management.  There is a museum, the R. P. Sebastian Englert Museum of Anthropology, which supports research and conservation efforts.  A management plan is in place which undergoes periodic review and there is a team in charge of Park administration. Nevertheless, site management becomes complex because of cultural differences and the reluctances from part of some sectors of the local community about State intervention.

Visitor management is a great imperative, with challenges in establishing carrying capacity and providing infrastructure of basic services and interpretation.  Also, it is necessary that the local population effectively support the conservation effort, for example, through livestock control.

A better dialogue is necessary among researchers to reach conclusions on the available knowledge and to manage it in a functional manner conducive to conservation; to systematize the information produced and generate a periodic, comprehensive and sustainable monitoring system.  Additional staff and resources are needed for the administration and care of the site, to reinforce the number and training of the park rangers team, and to increase the operating budget.  There is a constant pressure on park lands; the State must prevent its illegal occupation.

The essential requirement for the protection and management of this property lies in its multifaceted status as a World Heritage site, as a reference point and basis for the development of the population of the island, and repository of answers to fundamental questions that are far from being revealed. 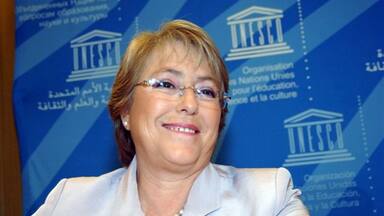