Preserved by its long isolation, the Upper Svaneti region of the Caucasus is an exceptional example of mountain scenery with medieval-type villages and tower-houses. The village of Chazhashi still has more than 200 of these very unusual houses, which were used both as dwellings and as defence posts against the invaders who plagued the region. 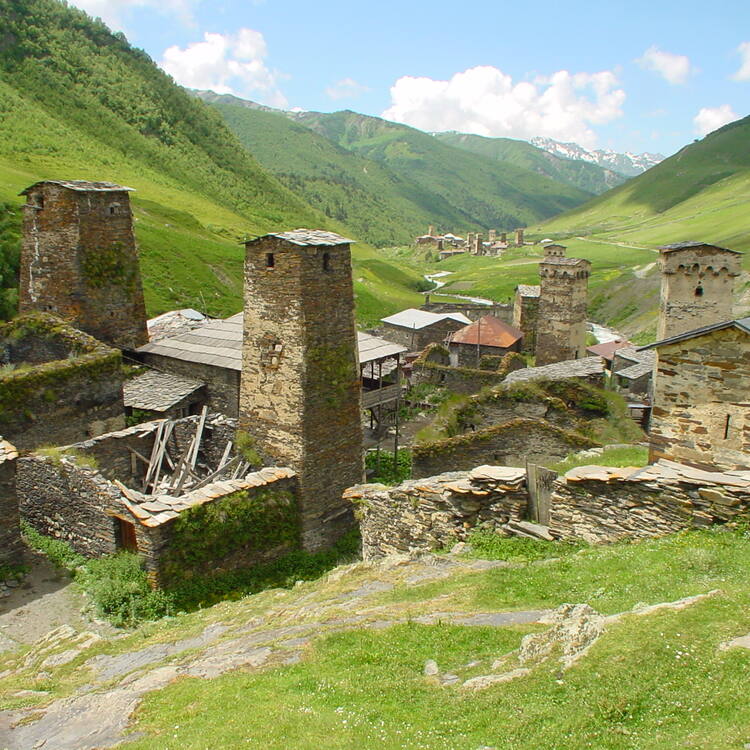 Preserved by its long-lasting geographical isolation, the mountain landscape of the Upper Svaneti region is an exceptional example of mountain scenery with medieval villages and tower houses.

The property occupies the upper reaches of the lnguri River Basin between the Caucasus and Svaneti ranges. It consists of several small villages forming a community that are dominated by the towers and situated on the mountain slopes, with a natural environment of gorges and alpine valleys and a backdrop of snow-covered mountains. The most notable feature of the settlements is the abundance of towers.

The village of Chazhashi in Ushguli community, situated at the confluence of the lnguri and Black Rivers, has preserved more than 200 medieval tower houses, churches and castles. The land use and settlement structure reveal the continued dwelling and building traditions of local Svan people living in harmony with the surrounding natural environment. The origins of Svaneti tower houses go back to prehistory. Its features reflect the traditional economic mode and social organization of Svan communities. These towers usually have three to five floors, and the thickness of the walls decreases, giving the towers a slender, tapering profile. The houses themselves are usually two-storeyed; the ground floor is a single hall with an open hearth and accommodation for both people and domestic animals, the latter being separated by a wooden partition, which is often lavishly decorated. A corridor annex helped the thermal insulation of the building. The upper floor was used by the human occupants during summer, and also served as a store for fodder and tools. A door at this level provided access to the tower, which was also connected with the corridor that protected the entrance. The houses were used both as dwellings and as defence posts against the invaders who plagued the region.

The property is also notable for the monumental and minor arts. The mural paintings are outstanding examples of Renaissance painting in Georgia.

Criterion (iv): The region of Upper Svaneti is an outstanding example of an exceptional mountain landscape composed of highly preserved villages with unique defensive tower houses, examples of ecclesiastical architecture and arts of medieval origin.

Criterion (v): The region of Upper Svaneti is an outstanding landscape that has preserved to a remarkable degree its original medieval appearance notable for its fragile traditional human settlements and land-use patterns.

The elements conveying the Outstanding Universal Value of Upper Svaneti are included within the boundaries of the property and its buffer zone. The exceptional medieval landscape, with its traditional settlement patterns, architecture and land use forms, ensures the representation of the property's significance and has retained its original appearance and substance to a great extent.

The architectural elements of the property have maintained the medieval material and most of them have retained their original use and function as well as the relationship with the surrounding environment.

All elements credibly express the Outstanding Universal Value of the property as they retain their authentic medieval form and distribution of traditional settlement and land use patterns, landscape setting, design of architectural typology, and they preserve to a high degree original material as well as the functions of dwelling and ecclesiastical structures. The interaction between humans and nature in the landscape is completely authentic and of high importance.

The geographical location and setting of this exceptional medieval landscape highly contribute to preservation of the forms of local intangible heritage, such as traditions, customs, beliefs, rituals of everyday life, language and folklore of the Svan community.

The harsh environmental conditions, lack of access during long winter periods, and inappropriate repair techniques applied to maintain the traditional structures often challenge the authenticity of material and the state of conservation of the components of the property.

The property has been designated as Ushguli-Chazhashi Museum Reserve since 1971. In the Soviet period the boundaries of the Strict Protection and Protection Zones were also defined. Due to several changes of cultural heritage legislation in the last 20 years, the boundaries of the protected landscape have changed. Currently the landscape is protected within 1 km radius around Chazhashi village, the component of the World Heritage property, as well as within 500 m around national monuments. This zone represents the legally protected buffer zone of the property with strict limitations for development activities. The individual architectural elements as well as entire villages of the Ushguli community (Chazhashi, Jibiani, Chvibiani and Murk’meli) remain listed as national monuments under the National Law on Cultural Heritage. The law prohibits any interventions on monuments without a prior permit from relevant state authorities and at the same time provides the highest level of protection zoning for these structures as to the elements of the World Heritage property. Other national laws in specific circumstances also apply.

The overall management and monitoring is implemented by the National Agency for Cultural Heritage Preservation of Georgia and its division - Parmen Zakaraia Nokalakevi Architectural-Archaeological Museum-Reserve. Due to the severe weather conditions that isolate the region in winter and the lack of financial resources it is difficult to implement regular monitoring missions at the site. The severe climatic conditions as well as insufficient conservation and management capacities remain among the risks to the property.

There is no Management Plan enforced. The local population and its traditional system of community management remain the key factors in the property management.

ICOMOS Georgia has actively worked on the different issues of Upper Svaneti cultural heritage and particularly on the site of Chazhashi village. In 2000-2001 a multidisciplinary research was implemented to study the different features of the site, including the community and social issues. Based on this research the Conservation Plan and a Site Development Strategy were prepared. These were followed by the rehabilitation-restoration projects for the historical buildings of the Chazhashi village.