The ironworks, which cover some 6 ha, dominate the city of Völklingen. Although they have recently gone out of production, they are the only intact example, in the whole of western Europe and North America, of an integrated ironworks that was built and equipped in the 19th and 20th centuries and has remained intact. 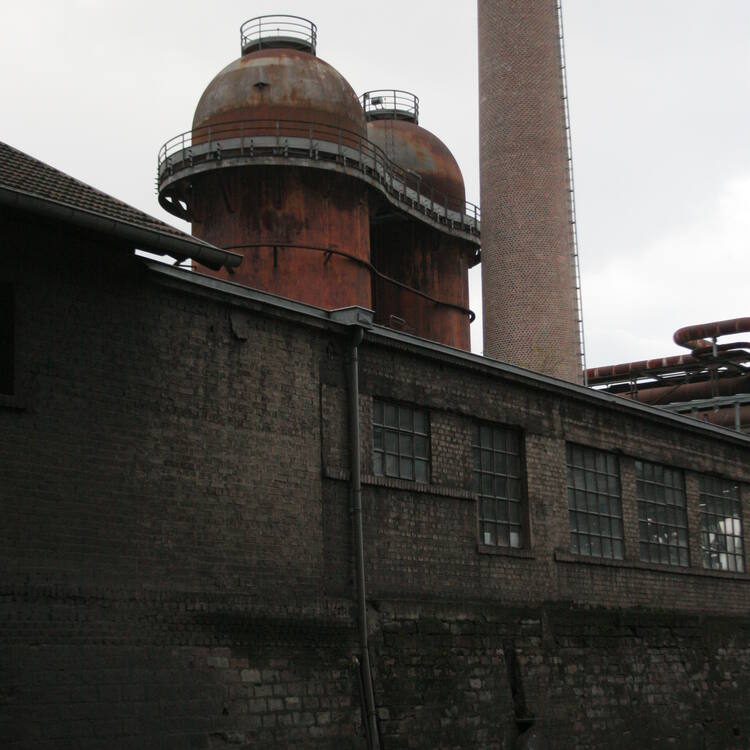 The Völklingen Ironworks in western Germany close to the border with France cover 6 ha and are a unique monument to pig-iron production in Western Europe. No other historic blast-furnace complex has survived that demonstrates the entire process of pig-iron production in the same way, with the same degree of authenticity and completeness, and is underlined by such a series of technological milestones in innovative engineering. The Völklingen monument illustrates the industrial history of the 19th century in general and also the transnational Saar-Lorraine-Luxembourg industrial region in the heart of Europe in particular. The Ironworks are a synonym for and a symbol of human achievement during the First and Second Industrial Revolutions in the 19th and beginning of the 20th centuries.

The iron-making complex dominates the townscape of Völklingen. It contains installations covering every stage in the pig-iron production process, from raw materials handling and processing equipment for coal and iron ore to blast-furnace iron production, with all the ancillary equipment, such as gas purification and blowing equipment.

The installations are exactly as they were when production ceased in 1986. The overall appearance is that of an ironworks from the 1930s, since no new installations were added after the rebuilding of the coking plant in 1935. There is considerable evidence of the history of the works in the form of individual items that have preserved substantial elements of their original form. Large sections of the frames and platforms of the blast furnaces, for example, have not been altered since their installation at the turn of the 19th to 20th centuries. Much of the original coking plant survives, despite the 1935 reconstruction, notably the coal tower of 1898. Six of the gas-blowing engines, built between 1905 and 1914, are preserved, as are the suspended conveyer system of 1911 and the dry gas purification plant of the same time. In addition, remains of Buch´s puddle ironworks of 1873 are preserved in the power station below the blast furnaces.

Criterion (ii): Several important technological innovations in the production of pig-iron were developed or first applied successfully on an industrial scale at Völklingen Ironworks and are now in universal use throughout the world.

Criterion (iv): The Völklingen Ironworks is an outstanding example of an integrated pig-iron production plant of the type, which dominated this industry in the 19th and early 20th centuries.

The Outstanding Universal Value of the Völklingen Ironworks lies in its unique completeness and originality. Technological milestones such as the dry gas purification plant, which was the first of its kind on such a large scale, the suspended conveyor system (the largest of its type), and the pioneer sinter plant are all integral parts of a complex 19th and 20th century pig-iron production works concentrated in a small area.

The features of Völklingen Ironworks are largely preserved as originally built and the complex is entirely authentic, since only minor additions or demolitions have taken place since it ceased production in 1986.

The laws and regulations of the Federal Republic of Germany and the State of Saarland guarantee the consistent protection of Völklingen Ironworks. It has been a cultural monument under the act on the Protection and Care of Monuments since 1987.

After being transferred from Dillinger-Hütte-Saarstahl AG to the Land Government of Saarland, a state owned company (Weltkulturerbe Völklinger Hütte Europäisches Zentrum für Kunst und Industriekultur GmbH) is holding the Völklingen Ironworks as property. Since the installation of the Weltkulturerbe Völklinger Hütte GmbH, plans for the preservation and care of the property have been worked out on a yearly basis by a locally installed ironworks conservation unit. Because of its structural similarity to the stonemasons' lodges attached to cathedrals (Dombauhütten), this unit was first called Hüttenbauhütte.

From a provisional working group of the Gesellschaft für Beschäftigung und Qualifikation GmbH (GBQ), the Landesentwicklungsgesellschaft Saar (LEG - State Development Agency), and the Staatliches Konservatoramt (State Conservation Office), a regular team was installed that is in charge of supervising all conservation as well as conversion projects.

The team’s work is determined by the new uses (museum, cultural events, exhibitions) of the complex, the ways in which it needs to be treated, and the unusual problems posed by the conservation requirements of rusting ironworks. The ironworks conservation unit also carries out regular inspections and evaluations of the plant, and is responsible for ensuring the security and protection of the monuments. The development unit of the Weltkulturerbe Völklinger Hütte GmbH maintains the ironworks as an industrial monument site and organises exhibitions on European Arts, as well as other cultural events. A management plan describing the management system, the management requirements, and visitor management has been set up.