This Cistercian abbey in Catalonia is one of the largest in Spain. At its centre is a 12th-century church. The austere, majestic monastery, which has a fortified royal residence and contains the pantheon of the kings of Catalonia and Aragon, is an impressive sight. 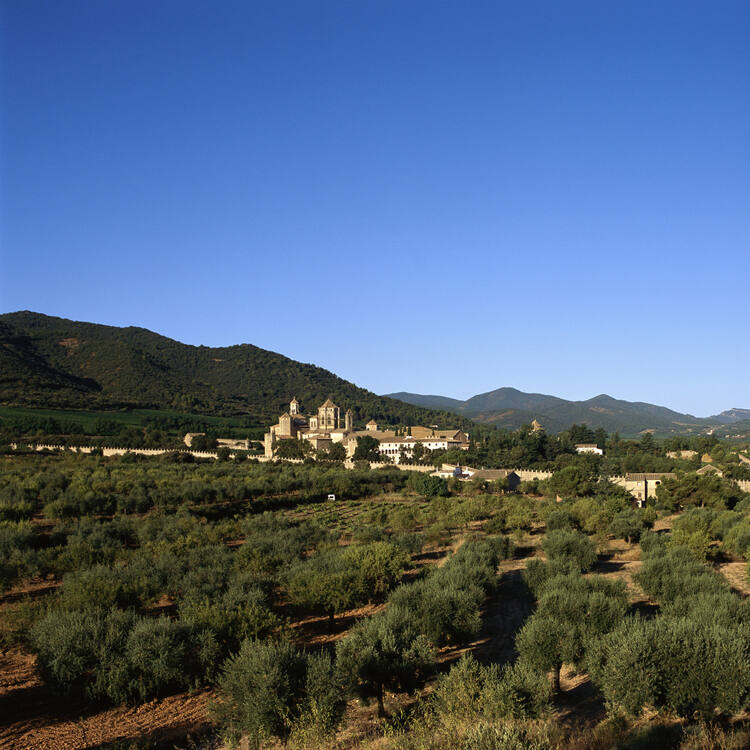 Poblet Monastery is located in the south of Catalonia, in the northeast of the Iberian Peninsula, in the municipality of Vimbodí. It is one of the largest and most complete Cistercian abbeys in the world. It was built in the 12th to 15th centuries around a church that dates to the 13th century. It is impressive for the majesty of its architecture and includes a fortified royal residence as well as the pantheon of the kings and queens of Catalonia and Aragon.

The Monastery is structured as three enclosures, surrounded by a defensive wall. The first outer enclosure contains buildings from the 16th century, such as storehouses, workshops, housing for lay workers and other premises connected with the financial life of the community. This enclosure also contains the Gothic chapel of Sant Jordi, built in 1452. The fortified Golden Door gives access to the second enclosure, made up of the Plaça Major, or Main Square, around which stand the remains of the hospital for the poor, the Romanesque chapel of Santa Caterina and the treasury. The third and innermost enclosure is fortified and includes the church, cloister and monastic rooms.

The defensive wall is crenulated and is strengthened by a series of square or polygonal towers, two of which flank the Royal Doorway.

The church is on a three-aisled basilical plan with transepts and an apsidal east end with ambulatory. The ceiling consists of a pointed vault in the central aisle and ribbed vaults on the side aisles. Notable features of the interior of the church are the Renaissance retable and the royal tombs. Mature Gothic forms dominate the great cloister. The earliest parts of the structure are the south gallery and the lavabo around which the oldest buildings of the complex (12th and 13th centuries) are distributed: the chapter house, the refectory, the kitchen and calefactory, the library, the old scriptorium, and the dormitory, built over the library and chapter house.

Poblet Monastery is extraordinarily important in terms of art, culture, history and spirituality and for its key role in the repopulation and agricultural exploitation of New Catalonia under the Crown of Aragon. Its library and scriptorium were well known from the 13th century onwards for their works on law and history, and the monastery served as a custodian of the history of the dynasty as well as the Royal remains.

It is also one of the most important and sumptuous Cistercian monasteries where the functional plan and spirit of the monastery are present throughout its structure. The spiritual quality of the life of Poblet Monastery has also made it a very important centre in the life of the country, from the time of its foundation until the present day.

Criterion (i): Poblet is a unique artistic achievement and one of the most perfect expressions of Cistercian style in the 12th, 13th and 14th centuries. The abbey contains masterpieces from every period such as the great alabaster altarpiece by Damià Forment (1529).

Criterion (iv): The Santa Maria of Poblet complex presents a unique blend of architectural forms generally reserved for distinct applications. Poblet has served as one of the largest and most complete of the Cistercian abbeys, as a massive military complex, and as a royal palace, residence and pantheon.

The inscribed property encompasses 18 ha, with a 163 ha buffer zone. Since the resumption of monastic life at Poblet in 1940, the church, refectory, cloister, chapter house, scriptorium and the abbot’s palace have all been restored, as has the retable of the high altar. Furthermore, the guesthouse and other monastic buildings have been reinstated, returning the monastery to its structure prior to the confiscations of ecclesiastical property in 1835, an event that brought about the abandonment and subsequent pillage of the monument.

Poblet preserves in their entirety all the attributes that convey the Outstanding Universal Value of the property. These include the church, refectory, cloister, chapter house, dormitory, scriptorium and the so-called lay-brothers’ wing, in the western enclosure, as well as the defensive perimeter walls and the wall around the convent complex itself, and the great royal gate that closes the entire monastery. As well as the monastic buildings themselves, there are several others within the precinct, among them the abbot's palace. Furthermore, the church preserves the group of royal tombs, and, amongst other remarkable artefacts, the Renaissance alabaster retable of the high altar, and the work of Damià Forment.

Monastic life continued in the monastery until the seizure of church lands in 1835, after which the complex deteriorated. In 1849, however, the Commission for Historic and Artistic Monuments intervened to halt this process. In 1930 reconstruction began and in 1940 monastic life returned to the abbey. The maintenance of its historic and architectural values has been assured through the various restoration and reinstatement works that have been undertaken since then.

Furthermore, the presence of the Cistercian religious community at Poblet, combined with the archives now kept there, such as the Tarradellas Archive, have ensured an authenticity which, in addition to the architectural aspects, extends to its original spiritual values, functions and use.

In terms of management, the system currently in place considers the primary religious and public use character of the property. The administration and business management is carried out through the Tarragona Territorial Cultural Heritage Commission and the Poblet Board of Trustees, which serve as formal steering groups. The management system also integrates different authorities at the State, Autonomous Community and local levels as per the mandates set forth in the legislative and regulatory framework.

Poblet Monastery has a Master Plan, promoted by the monastic community. The responsibility for the implementation and supervision of this Plan, as well as monitoring its effectiveness, lies with the Government of Catalonia and the Poblet Board of Trustees. The financial resources needed for the conservation and restoration of this monument are drawn from a variety of sources such as the Government of Catalonia, through its Presidential Department, the Ministry of Culture, the Ministry for Territory and Sustainability, the Tarragona Provincial Council and revenue from entrance tickets. Public use and tourism management, which are reconciled with respect for the monastic community that inhabits the Monastery, are also addressed through different actions. Furthermore, tourism is also managed in the context of the Cistercian Route.