The List Mausoleum of the First Qin Emperor
Print

No doubt thousands of statues still remain to be unearthed at this archaeological site, which was not discovered until 1974. Qin (d. 210 B.C.), the first unifier of China, is buried, surrounded by the famous terracotta warriors, at the centre of a complex designed to mirror the urban plan of the capital, Xianyan. The small figures are all different; with their horses, chariots and weapons, they are masterpieces of realism and also of great historical interest. 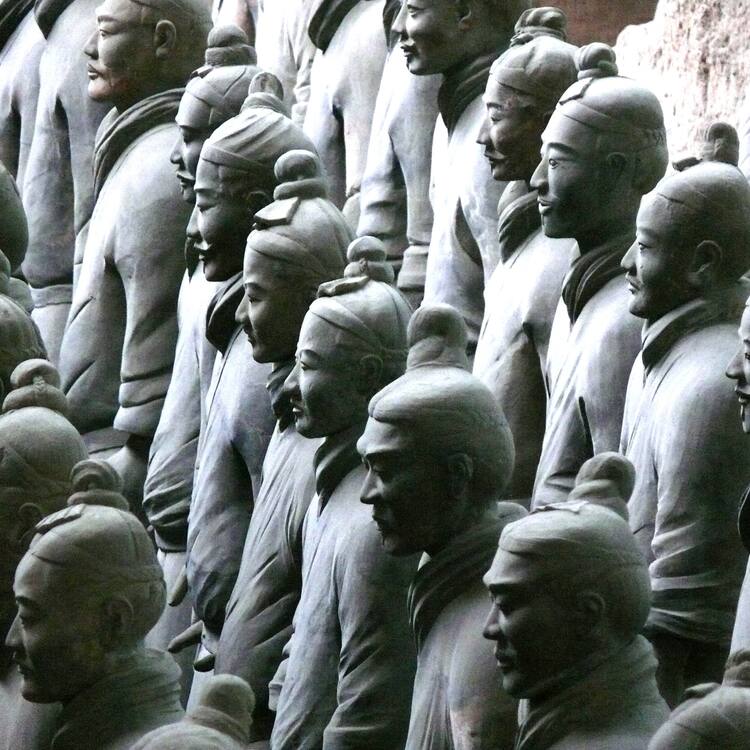 Located at the northern foot of Lishan Mountain, 35 kilometers northeast of Xi'an, Shaanxi Province, Qinshihuang Mausoleum is the tomb of Emperor Qinshihuang, founder of the first unified empire in Chinese history during the 3rd century BCE. Begun in 246 BCE the grave mound survives to a height of 51.3 meters within a rectangular, double-walled enclosure oriented north-south. Nearly 200 accompanying pits containing thousands of life-size terra cotta soldiers, terra cotta horses and bronze chariots and weapons - a world-renowned discovery - together with burial tombs and architectural remains total over 600 sites within the property area of  56.25 square kilometers. According to the historian Sima Qian (c. 145-95 BCE), workers from every province of the Empire toiled unceasingly until the death of the Emperor in 210 in order to construct a subterranean city within a gigantic mound.

As the tomb of the first emperor who unified the country, it is the largest in Chinese history, with a unique standard and layout, and a large number of exquisite funeral objects. It testifies to the founding of the first unified empire- the Qin Dynasty, which during the 3rd BCE, wielded unprecedented political, military and economic power and advanced the social, cultural and artistic level of the empire.

Criterion (i): Because of their exceptional technical and artistic qualities, the terracotta warriors and horses, and the funerary carts in bronze are major works in the history of Chinese sculpture prior to the reign of the Han dynasty.

Criterion (iii): The army of statues bears unique testimony to the military organization in China at the time of the Warring Kingdoms (475-221 BCE) and that of the short-lived Empire of a Thousand Generations (221-210 BCE). The direct testimony of the objects found in situ (lances, swords, axes, halberds, bows, arrows, etc.) is evident. The documentary value of a group of hyper realistic sculptures where no detail has been neglected - from the uniforms of the warriors, their arms, to even the horses' halters - is enormous. Furthermore, the information to be gleaned from the statues concerning the craft and techniques of potters and bronze-workers is immeasurable.

Criterion (iv): The mausoleum of Qin Shi Huang is the largest preserved site in China. It is a unique architectural ensemble whose layout echoes the urban plan of the capital, Xianyang, with the imperial palace enclosed by the walls of the city, themselves encircled by other walls. This capital of the Qin (to which succeeded on the present site of Xian the capitals of the Han, Sui and Tang dynasties) is a microcosm of the Zhongguo (Middle Country) that Qin Shi Huang wanted both to unify (he imposed throughout the land a single system of writing, money, weights and measures) and to protect from the barbarians that could arrive from any direction (the army which watches over the dead emperor faces outward from the tomb).

Criterion (vi): The mausoleum of Qin Shi Huang is associated with an event of universal significance: the first unification of the Chinese territory by a centralized state created by an absolute monarch in 221 BCE.

The Qinshihuang Mausoleum features a high level of integrity; the grave mound, mausoleum constructions, burial pits, sites of ritual construction and overall setting in the property area and the buffer zone are well preserved, and fully reflect the structure and ritual system of the whole mausoleum.

The grave mound, sites of constructions, burial tombs and burial pits in Qinshihuang Mausoleum truthfully maintain their original location, material, formation，technology and structure, which authentically reflect the constricting regulation of the Mausoleum and palace life and military systems of the Qin Dynasty. The numerous unearthed cultural relics reflect the highest technical level of pottery, chariot assembly, metallurgy and metal processing in the Qin Dynasty.

In order to respond to the pressure of urban development and tourism, the Shaanxi provincial government approved the Conservation Plan for Qinshihuang Mausoleum in July 2010, which clarifies the borders of the protection area and the construction control zone around the mausoleum and prohibits the development of Lintong district from infringing on the mausoleum. The measure has effectively protected the mausoleum and its settings, prevented destructive activities, and ensured the authenticity and integrity of the proper

(1)
Publication Of The Proceedings Of The International Symposium In Hildesheim, Germany: World Cultural Heritage - A Global Challenge
18 September 1997
Events