The List Temple of Apollo Epicurius at Bassae
Print

This famous temple to the god of healing and the sun was built towards the middle of the 5th century B.C. in the lonely heights of the Arcadian mountains. The temple, which has the oldest Corinthian capital yet found, combines the Archaic style and the serenity of the Doric style with some daring architectural features. 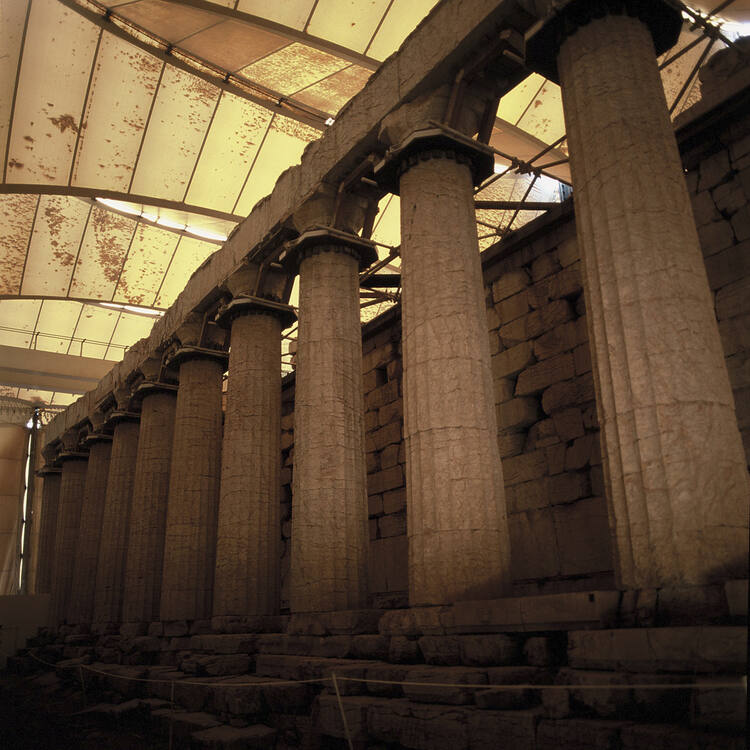 The columned temple of Apollo Epicurius rises majestically within the sanctuary of Bassae in the mountains of Arkadia. It is one of the best-preserved monuments of classical antiquity and an evocative and poignant testament to classical Greek architecture. It is highly significant for its architectural features and influence.

The temple was built at the height of the Greek civilization in the second half of the 5th century BC (420-400 BC). It was dedicated to Apollo Epicurius by the Phigaleians, who believed the god of sun and healing had protected them from plague and invasion. In 174 AD the ancient traveller Pausanias admired the beauty and harmony of the temple and attributed it to Iktinos, the architect of the Parthenon.

The temple appears to have been forgotten for almost 1700 years until it was rediscovered in the 18th century and attracted intense interest from scholars and artists. The isolation of the site ensured many significant features survived largely intact. The temple is one of the earliest post-Parthenonian edifices and the earliest monument in which all three ancient Greek architectural orders – Doric, Ionic and Corinthian – are found together. It also included the earliest surviving Corinthian column capital. The temple further exhibits a number of bold and innovative architectural designs that mark a turning point in the development of temple-building. Through a series of ingenious devices, the architect successfully balanced contrasting elements and blended the old with the new, contributing to the unique architectural and artistic value of the monument. The temple, as well as its sculptural decoration consist one of the best-preserved samples of the ancient Greek civilization, from the period of its heyday (5th century BC).

Criterion (i): The Temple of Bassae represents a unique artistic achievement, remarkable for its archaic features (elongated surface, an exceptional proportion of 15 columns on the longer side and 6 columns on the facade, and a north-south exposure), and for its daring innovations: use of Ionic and Corinthian orders for a Doric edifice, the variety of materials used, and the originality of the layout of the cella and the adyton.

Criterion (ii): The capital of the central column of the Temple of Bassae is the most ancient conserved Corinthian capital, and as such the temple may be considered a model for all “Corinthian” monuments of Greek, Roman and subsequent civilisations.

Criterion (iii): Isolated as it is in a conserved environment, the temple of Apollo is an outstanding example of a Hellenic votive sanctuary in a rural setting.

The World Heritage property contains within its boundaries all the key attributes that convey the Outstanding Universal Value of the property. The integrity of the monument is primarily ensured by relative isolation of the property and the designation of the surrounding area as an archaeological site. All the significant elements of the temple, such as its outer colonnade, as well as many features of the internal architecture arrangement, are preserved largely intact. The decorative frieze of sculptured panels that formed an integral part of the design was removed in 1812 and remains in the British Museum together with the Corinthian capital.

A series of coordinated management interventions have been established to ensure the continuing protection of the site as a whole, including a protective shelter and water runoff system to minimize deterioration from the extreme weather.

The long distance of the property from settlements has ensured a high degree of authenticity. The site was forgotten for 1700 years ensuring that there were no significant modifications to the structure after its completion in the 5th century. As a consequence the structure and almost all of its building material has been preserved and the temple is one of the most authentic from this period.

The declaration of a large conservation zone around the temple ensures that the site retains its original setting within a natural landscape. The temple’s restoration and conservation works have been conducted according to the international restoration principles, and where necessary, additions to the site are made using the local limestone (a material similar to that used in the monument). The temple and the surrounding landscape, preserved almost intact through the course of centuries, impress the visitor of today, who comes in contact with the first expressions of trends that determined the evolution, both of art and architecture.

The property is protected under the provisions of Law No. 3028/2002 on the “Protection of Antiquities and Cultural Heritage in general”. The broader area of the Temple of Apollo Epicurius has been designated as an archaeological site (Ministerial Decree 44671/1836/5-11-1986). Following a series of expropriations, an additional expanse of 4.5 ha was added to the archaeological site in 1996. The property has a sufficient buffer zone, while the greater area of the temple does not contain any building that could impede visual contact with the monument or the archaeological site.

The property is under the jurisdiction of the Ministry of Culture, Education and Religious Affairs, through the Ephorate of Antiquities of Eleia, its competent Regional Service, which has undertaken the works of preservation and protection of the monument. The Committee for the Conservation of the Temple of Apollo Epicurius was established in 1975, in order to supervise more effectively the systematic works necessary for the conservation of the monument. The temple’s restoration works started in 2001 and are still in progress. The financial resources for the project derive by the state budget as well as European Union’s funds.

The monument and its surrounding area are fenced and protected 24 hours per day to minimize the risk of vandalism. The greatest threats to the property stem from inherent weaknesses in the building structure and the adverse effects of climate and environment, including extreme temperatures, strong wind, water and seismic activity. Restoration and conservation work thus seek to address these issues. An antiseismic netting as well as a lightning protection system have been installed at the temple. Planned future works continue the current restoration work. This includes replacement of the protective shelter, which has been constructed to minimize damage caused by the extreme weather conditions and provide more favourable conditions for major restoration work. In addition, the scheduled installation of a permanent water supply system will contribute significantly to a more effective fire protection system for the entire property.