The List Castles and Town Walls of King Edward in ...
Print

The castles of Beaumaris and Harlech (largely the work of the greatest military engineer of the time, James of St George) and the fortified complexes of Caernarfon and Conwy are located in the former principality of Gwynedd, in north Wales. These extremely well-preserved monuments are examples of the colonization and defence works carried out throughout the reign of Edward I (1272–1307) and the military architecture of the time. 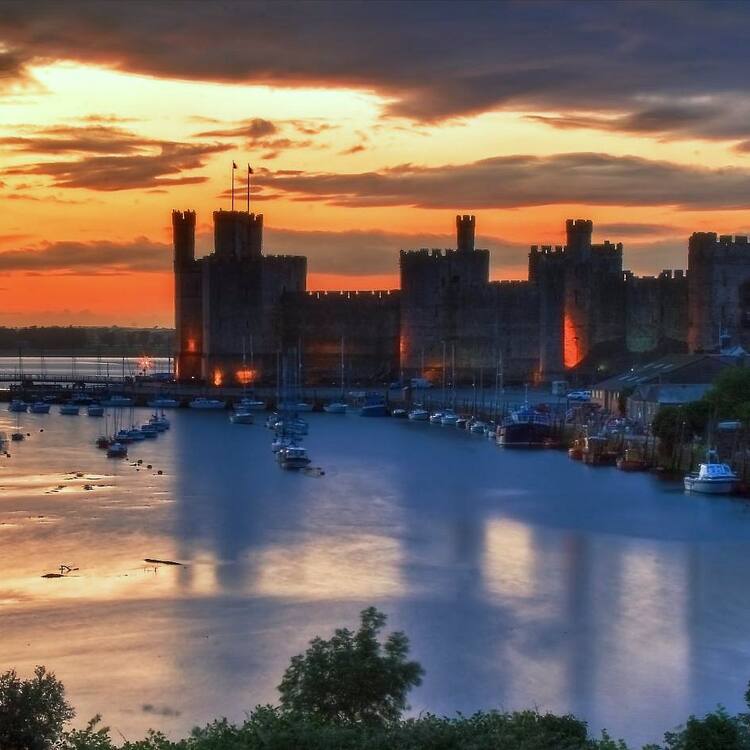 The four castles of Beaumaris, Conwy, Caernarfon, Harlech and the attendant fortified towns at Conwy and Caernarfon in Gwynedd, North Wales, are the finest examples of late 13th century and early 14th century military architecture in Europe, as demonstrated through their completeness, pristine state, evidence for organized domestic space, and extraordinary repertory of their medieval architectural form.

The castles as a stylistically coherent group are a supreme example of medieval military architecture designed and directed by James of St George (c. 1230-1309), King Edward I of England’s chief architect, and the greatest military architect of the age.

The extensive and detailed contemporary technical, social, and economic documentation of the castles, and the survival of adjacent fortified towns at Caernarfon and Conwy, makes them one of the major references of medieval history.

The castles of Beaumaris and Harlech are unique artistic achievements for the way they combine characteristic 13th century double-wall structures with a central plan, and for the beauty of their proportions and masonry.

Criterion (i): Beaumaris and Harlech represent a unique achievement in that they combine the double-wall concentric structure which is characteristic of late 13th century military architecture with a highly concerted central plan and in terms of the beauty of their proportions and masonry. These are masterpieces of James of St George who, in addition to being the king’s chief architect, was constable of Harlech from 1290 to 1293.

Criterion (iii): The royal castles of the ancient principality of Gwynedd bear a unique testimony to construction in the Middle Ages in so far as this royal commission is fully documented. The accounts by Taylor in Colvin (ed.), The History of the King’s Works, London (1963), specify the origin of the workmen, who were brought in from all regions of England, and describe the use of quarried stone on the site. They outline financing of the construction works and provide an understanding of the daily life of the workmen and population and thus constitute one of the major references of medieval history.

Criterion (iv): The castles and fortifications of Gwynedd are the finest examples of late 13th century and early 14th century military architecture in Europe. Their construction, begun in 1283 and at times hindered by the Welsh uprisings of Madog ap Llewelyn in 1294, continued until 1330 in Caernarfon and 1331 in Beaumaris. They have only undergone minimal restoration and provide, in their pristine state, a veritable repertory of medieval architectural form: barbicans, drawbridges, fortified gates, chicanes, redoubts, dungeons, towers and curtain walls.

The individual castles possess a high degree of integrity with the coherence of their planning, innovative design and quality of construction being undiminished.

The overall series of the four castles of Edward I includes within the property boundary all the medieval defensive structures – castles and town walls – but not the planned settlements or waterfronts. All the defensive attributes are within the boundary but as the towns were an integral part of their defensive, administrative and economic arrangements, and their waterside position contributed to their defence and trade, the full range of attributes could be seen to extend beyond the narrow boundaries.

The essential relationship between their coastal landscapes and each castle remains intact and in two cases the intimate interrelationship of castle and town remains a striking feature of the present day urban landscape; while a reassessment of the boundaries could be considered, the wider landscape setting needs to be protected. Currently, there is no buffer zone but the ‘essential setting’ of and ‘significant views’ from each castle have been defined in the management plan.

The authenticity of all four medieval castles and of the two town wall circuits has been maintained despite some reconstruction in the late 19th century at Caernarfon. During the last 100 years the conservation of the castles and town walls has been undertaken following the philosophy of conserve as found, and minimal intervention or intrusive modification has occurred. The plans, form, materials and component features of the castles are largely unaltered. They clearly still display the wide repertory of medieval architectural forms: barbicans, drawbridges, fortified gates, chicanes, redoubts, dungeons, towers and curtain walls.

The town walls at Caernarfon and Conwy remain unchanged providing an almost complete enclosed entity to their related townscapes.

The overall setting of the four castles remains largely intact – with the exception of development on the plain at Harlech and some new development at Caernarfon – and thus they retain their ability to present very clearly their scale, defensive power and intimidating presence.

The UK Government protects World Heritage properties by the statutory protection of individual sites and buildings and by spatial planning and guidance. The four castles and two town wall circuits are protected by statutory scheduling as monuments of national importance and by their being ‘guardianship monuments’ maintained by the relevant conservation body within government according to current conservation principles. All four are protected by Local Plans, Planning Guidance and their World Heritage Management Plans which are reviewed regularly; Harlech is within the Snowdonia National Park while all four are within Conservation Areas that cover the immediate setting of the Castles and Town Walls. Their wider setting has been defined as ‘essential settings’ and key views are protected. Evaluation of boundaries will be undertaken as part of the Management Plan review process.

These measures combine to ensure that the Castles are subject to rigorous controls over development that could potentially impact upon them or their setting. Shoreline Management Plans and the Environment Agency’s Flood Risk Assessments help protect the sites from coastal erosion or unsympathetic coastal development, thus keeping intact the important coastal views and sightlines.

The World Heritage Steering Group, which includes the participation of site owners, local authorities, government and the general public, has responsibility for the implementation of the Management Plan that ensures that conservation, development control, educational use and public accessibility is maintained.