St Michael's Church was built between 1010 and 1020 on a symmetrical plan with two apses that was characteristic of Ottonian Romanesque art in Old Saxony. Its interior, in particular the wooden ceiling and painted stucco-work, its famous bronze doors and the Bernward bronze column, are – together with the treasures of St Mary's Cathedral – of exceptional interest as examples of the Romanesque churches of the Holy Roman Empire. 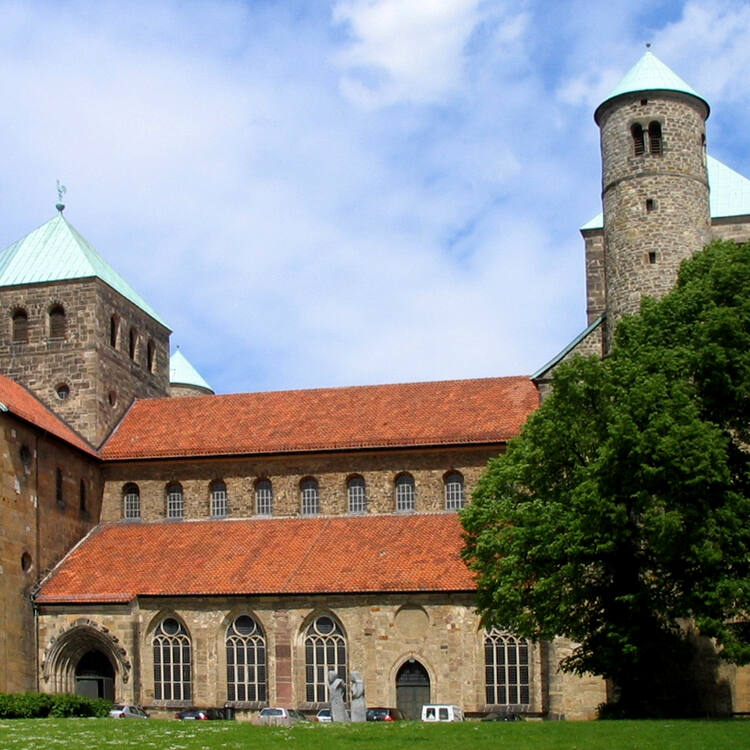 The ancient Benedictine abbey church of St Michael in Hildesheim, located in the north of Germany, is one of the key monuments of medieval art, built between 1010 and 1022 by Bernward, Bishop of Hildesheim. St Michael’s is one of the rare major constructions in Europe around the turn of the millennium which still conveys a unified impression of artistry, without having undergone any substantial mutilations or critical transformations in basic and detailed structures.

St Michael's Church was built on a symmetrical ground plan with two apses that was characteristic of Ottonian Romanesque art in Old Saxony. Its interior, in particular the wooden ceiling and painted stucco-work, together with the treasures of St Mary's Cathedral – in particular its famous bronze doors and the Bernward bronze column – make the property of exceptional interest as examples of the Romanesque churches of the Holy Roman Empire. The harmony of the interior structure of St Michael’s and its solid exterior is an exceptional achievement in architecture of the period. Of basilical layout with opposed apses, the church is characterised by its symmetrical design: the east and west choirs are each preceded by a transept which protrudes substantially from the side aisles; elegant circular turrets on the axis of the gable of both transept arms contrast with the silhouettes of the massive lantern towers located at the crossing. In the nave, the presence of square impost pillars alternating in an original rhythm with columns having cubic capitals creates a type of elevation which proved very successful in Ottonian and Romanesque art.

St Mary's Cathedral, rebuilt after the fire of 1046, still retains its original crypt. The nave arrangement, with the familiar alternation of two consecutive columns for every pillar, was modelled after that of St Michael's, but its proportions are more slender.

The Church of St Michael and the Cathedral of St Mary with its church treasure contain an exceptional series of elements of interior decoration that together are quite unique for the understanding of layouts used during the Romanesque era. The bronze doors of St Mary, dating back to 1015, represent the events from the book of Genesis and the life of Christ, and the bronze column of St Michael dating from around 1020, with its spiral decor inspired by Trajan's Column, depicts scenes from the New Testament. These two exceptional castings, the first ones of this size since antiquity, were commissioned by Bishop Bernward. Both are now preserved in the Cathedral of St Mary. Also of special significance are the corona of light of Bishop Hezilo and the baptismal fonts of gold-plated bronze of Bishop Conrad (ca 1225-1230) in the Cathedral. Lastly, St Michael's displays the painted stuccos of the choir screen and the amazing ceiling: 27.6 m long and 8.7 m wide, depicting the Tree of Jesse, which covers the nave. These two works were carried out after the canonisation of St Bernward in 1192 – the stuccos at the very end of the 12th century and the ceiling around 1130. The ceiling, with its 1300 pieces of wood, along with that of Zillis in Switzerland, is one of only two remaining examples of such an extremely vulnerable structure.

Criterion (i): The Bernward bronzes and the ceiling at St Michael's Church represent a unique artistic achievement.

Criterion (iii): St Mary's Cathedral and St Michael's Church of Hildesheim and their artistic treasures afford better and more immediate overall understanding than any other decoration in Romanesque churches in the Christian West.

As the churches themselves are located on elevated ground, the surrounding buildings are not overpowering, and do not significantly disturb the view to and from the churches in the urban landscape. Furthermore, the Medieval layout of the town is quite well conserved and corresponds to the period of construction of the property (11th and 12th centuries). St Mary´s Cathedral and St Michael’s Church contain all the elements necessary to express the Outstanding Universal Value. The property is of appropriate size, and all features and structures to convey its significance as exceptional examples of art and architecture of the Holy Roman Empire are present.

Despite the destruction that occurred during the Second World War, St Michael's Church remained intact up to the eaves although it has undergone major restoration. All of the important design elements can still be seen today in full and undiminished form. A centrepiece in the interior of the church is the wooden ceiling from the early 13th century, which was temporarily removed during the war and is unique worldwide. All of the other interior elements in St Mary’s Cathedral and St Michael's Church that are sustaining the property’s Outstanding Universal Value are in an equally authentic condition. St Mary´s Cathedral was almost completely destroyed in the Second World War, but many parts of the cloisters and the adjoining chapel remained undamaged, in particular the precious interior furnishings. All the movable fixtures and fittings were removed and brought into safety in time.

In the reconstruction after 1945 and in all later repairs and restorations, the primary aim has been to recreate the Medieval appearance of both large buildings according to the latest research.

The laws and regulations of the Federal Republic of Germany and the State of Lower Saxony guarantee the consistent protection of St Mary's Cathedral and St Michael's Church at Hildesheim. They are listed monuments according to the Lower-Saxon Monument Protection Act. Building activities outside the property are regulated by paragraph 8 of the Monument Protection Act.

Furthermore, a buffer zone has been designated to ensure the continuous protection and sustained preservation of the important views and structural integrity of St Mary's Cathedral and St Michael's Church and their immediate surroundings. Lastly, paragraph 2 of the Monument Protection Act contains a special clause concerning the protection of World Heritage properties in Lower Saxony.

Conservation and construction issues are organised and managed in close cooperation among the owners, the State Office for Historic Monuments, the Ministry for Science and Culture and various scientific committees. The management system consists of a set of maintenance and conservation measures, which are yearly checked and regularly updated when required to ensure the protection of the property.