Speyer Cathedral, a basilica with four towers and two domes, was founded by Conrad II in 1030 and remodelled at the end of the 11th century. It is one of the most important Romanesque monuments from the time of the Holy Roman Empire. The cathedral was the burial place of the German emperors for almost 300 years. 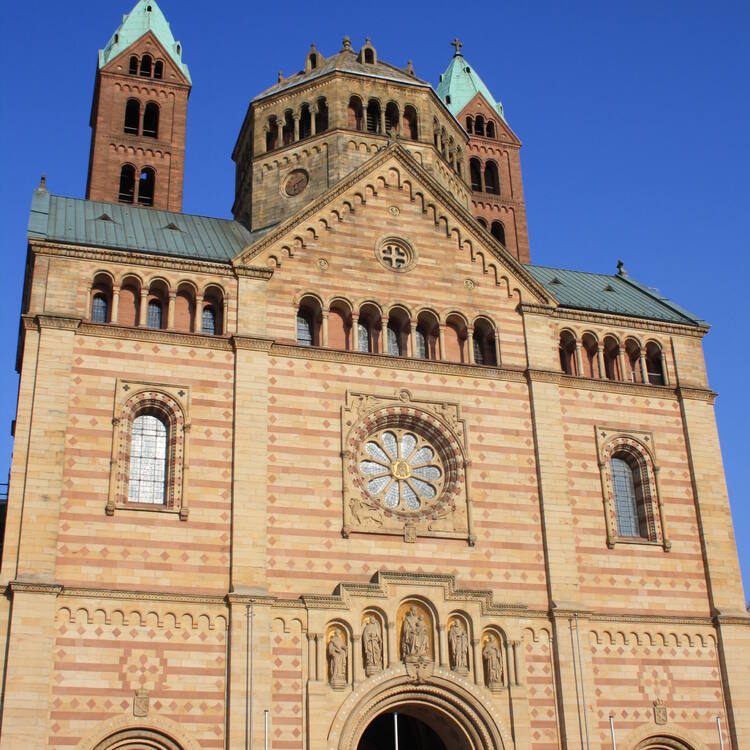 Speyer Cathedral in the southwest of Germany, a basilica with four towers and two domes, was founded as a flat-ceiling basilica by Konrad II in 1030, probably soon after his imperial coronation. It was rebuilt by Henry IV, following his reconciliation with the Pope in 1077, as the first and largest consistently vaulted church building in Europe. The Cathedral was the burial place of the German emperors for almost 300 years.

Speyer Cathedral is historically, artistically and architecturally one of the most significant examples of Romanesque architecture in Europe. It is, by virtue of its proportions, the largest, and, by virtue of the history to which it is linked, the most important.

The Cathedral is an expression and self-portrayal of the abundance of imperial power during the Salian period (1024 - 1125) and was built in conscious competition to the Abbey of Cluny as the building representative of the papal opposition.

The Cathedral incorporates the general layout of St Michael of Hildesheim and brings to perfection a type of plan that was adopted generally throughout the Rhineland. This plan is characterized by the equilibrium of the eastern and western blocks and by the symmetrical and singular placement of the towers which frame the mass formed by the nave and the transept. Under Henry IV renovations and extensions were undertaken. Speyer Cathedral is the first known structure to be built with a gallery that encircles the whole building. The system of arcades added during these renovations was also a first in architectural history.

In its size and the richness of its sculptures, some created by Italian sculptors, it stands out among all contemporary and later Romanesque churches in Germany, and it had a profound influence on the pattern of their ground plans and vaulting. Today – after the destruction of the Abbey of Cluny – Speyer Cathedral is the biggest Romanesque church in the world. Likewise its crypt, consecrated in 1041, is the biggest hall of the Romanesque era. No less than eight medieval emperors and kings of the Holy Roman Empire of the German Nation from Konrad II to Albrecht of Habsburg in 1309 were laid to rest in its vault. In 1689 the Cathedral was seriously damaged by fire. The reconstruction of the west bays of the nave from 1772 to 1778, as an almost archaeologically exact copy of the original structure, can be regarded as one of the first great achievements of monument preservation in Europe. The westwork, rebuilt from 1854 to 1858 by Heinrich Hübsch on the old foundations, is by contrast, a testi­mony to Romanticism’s interpretation of the Middle Ages, and as such an independent achievement of the 19th century. Commissioned by the Bavarian King Ludwig I., the interior was painted in late Nazarene style by the school of Johannes Schraudolph and Josef Schwarzmann from 1846 to 1853.

Criterion (ii): The Speyer Cathedral has exerted a considerable influence not only on the development of Romanesque architecture in the 11th and 12th centuries, but as well on the evolution of the principles of restoration in Germany, in Europe and in the world from the 18th century to the present.

Apart from the seven western bays of the nave and the westwork, the mediaeval structure is original. After a serious fire in 1689 the seven western bays of the nave had to be newly erected (1772-1778) and are an exact copy of the original structure. The westwork, replacing the mediaeval structure and the addition of the late 18th century, is an addition of the period of 1854 to 1858. In the course of the comprehensive restoration campaign between 1957 and 1972 the original Romanesque interior was reconstructed by deleting the alterations and additions of the Baroque period and the 19th century.

In terms of form and design, use and function Speyer Cathedral still expresses truthfully the essence of one of the most important Romanesque churches in Europe. The restoration history and methods document the evolution of the principles of restoration.

The property is legally protected under regional and national legislation and managed under the responsibility of the Cathedral Chapter by the Cathedral Construction Administration (Dombauamt). They act in concertation with the historic monument conservation authorities and a scientific committee.

The Cathedral is permanently maintained by the Cathedral Construction Administration. The management system consists of a set of maintenance and conservation measures respecting the liturgical function.