The List The Slate Landscape of Northwest Wales
Print

The Slate Landscape of Northwest Wales illustrates the transformation that industrial slate quarrying and mining brought about in the traditional rural environment of the mountains and valleys of the Snowdon massif. The territory, extending from mountain-top to sea-coast, presented opportunities and constraints that were used and challenged by the large-scale industrial processes undertaken by landowners and capital investors, which reshaped the agricultural landscape into an industrial centre for slate production during the Industrial Revolution (1780-1914). The serial property comprises six components each encompassing relict quarries and mines, archaeological sites related to slate industrial processing, historical settlements, both living and relict, historic gardens and grand country houses, ports, harbours and quays, and railway and road systems illustrating the functional and social linkages of the relict slate industrial landscape. The property was internationally significant not only for the export of slates, but also for the export of technology and skilled workers from the 1780s to the early 20th century. It played a leading role in the field and constituted a model for other slate quarries in different parts of the world. It offers an important and remarkable example of interchange of materials, technology and human values. 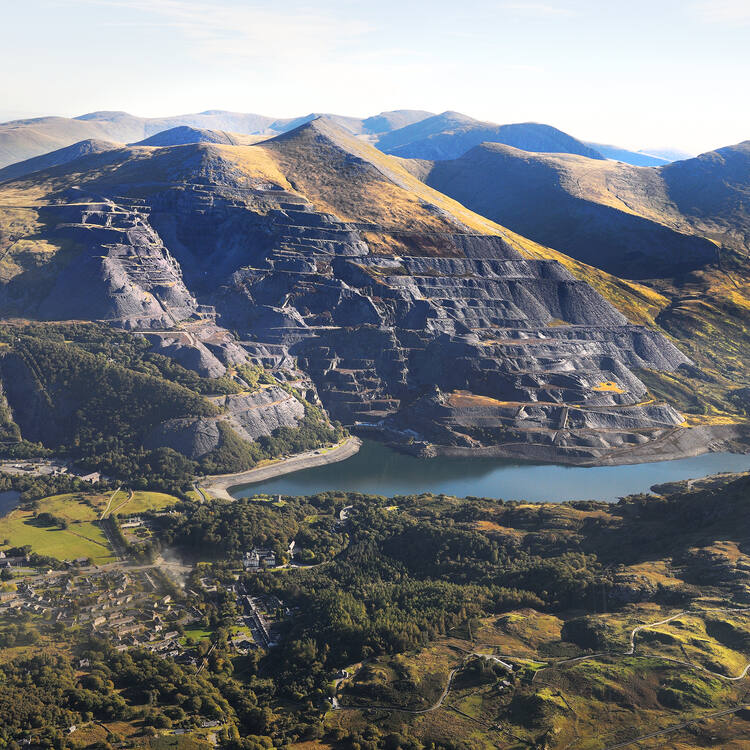 The Slate Landscape of Northwest Wales is located in the United Kingdom, in the mountains of Snowdon massif. Six areas together represent an exceptional example of an industrial landscape which was profoundly shaped by quarrying and mining slate, and transporting it for national and international markets. From 1780 to 1940 this industry dominated world production of roofing slates, transforming both the environment and the communities who lived and worked here. The quarries and mines are monumental in scale, comprising stepped hillside workings, deep pits and cavernous underground chambers, massive cascading tips, ingenious water systems, and a range of industrial buildings. Outstanding technical equipment and major engineering features survive. Innovative transport systems linked quarries and processing sites with purpose-built coastal export harbours and with main-line railways. Grand country houses and estates built by leading industrialists contrast with workers’ vernacular settlements, with their characteristic chapels and churches, band-rooms, schools, libraries and meeting-places which retain multiple examples of their traditional way of life and strong minority language.

By the late 19th century, the region produced about a third of the world output of roofing slates and architectural slabs. Its use in terraced houses, factories, warehouses and elite architecture contributed to rapid global urbanization. It influenced building styles, encouraging the shallow-pitched roofs of the Georgian order. Technologies that were innovated, adopted and adapted in the property include the ingenious application of waterpower, the development of bulk handling systems and the first known application of the circular saw for cutting stone. These were diffused by specialists and by emigration of skilled Welsh quarrymen to the developing slate industries of the United States, continental Europe and Ireland. The Snowdon massif’s narrow-gauge railway systems gained global influence and were adopted from Asia and America to Africa and Australasia.

Criterion (ii): The Slate Landscape of Northwest Wales exhibits an important interchange, particularly in the period from 1780 to 1940, on developments in architecture and technology. Slate has been quarried in the mountains of Northwest Wales since Roman times, but sustained large-scale production from the late 18th to the early 20th centuries dominated the global market as a roofing element. This led to major transcontinental developments in building and architecture. Technology, skilled workers and knowledge transfer from this cultural landscape was fundamental to the development of the slate industry of continental Europe and the United States. Moreover, its narrow-gauge railways – which remain in operation under steam today – served as the model for successive systems which contributed substantially to the social and economic development of regions in many other parts of the world.

Criterion (iv): The Slate Landscape of Northwest Wales is an outstanding example of a stone quarrying and mining landscape which illustrates the extent of transformation of an agricultural environment during the Industrial Revolution. Massive deposits of high-quality slate defined the principal geological resource of the challenging mountainous terrain of the Snowdon massif. Their dispersed locations represent concentrated nodes of exploitation and settlement, of sustainable power generated by prolific volumes of water that was harnessed in ingenious ways, and brought into being several innovative and technically advanced railways that made their way to new coastal ports built to serve this transcontinental export trade. The property comprises the most exceptional distinct landscapes that, together, illustrate the diverse heritage of a much wider landscape that was created during the era of British industrialisation.

The property contains all of the essential elements that convey attributes of Outstanding Universal Value. Its boundaries capture the principal non-active slate-producing areas in Northwest Wales, together with their associated industrial heritage that includes the most significant processing facilities, settlements and transport routes. The protective mechanisms in place should be consistently used to strengthen the integrity of the property and its setting.

The well-preserved cultural landscape retains a high level of authenticity, and has experienced little intervention since the main period of industrial operation. Attributes of Outstanding Universal Value are conveyed by physical elements that are clearly identified and understood in terms of date, spatial distribution, use and function (including living communities and operational railways), form and design, materials and substance, and their interrelationships including connectivity and overall functional and compositional integrity of the series. The serial property further embodies a vibrant cultural tradition, including slate-working skills and the continued widespread use of the Welsh language. Key attributes are reflected in landscape qualities and features of quarrying including the relict working areas, tips and transport routes, together with associated settlements and social infrastructure. The historical settlements present different yet acceptable levels of authenticity, which need to be closely monitored and controlled by the management system and respective Local Management Plans.

The serial property and its setting are afforded the highest levels of protection through the implementation of existing legislation: The Ancient Monuments and Archaeological Areas Act 1979, The Town and Country Planning Act 1990, The Planning (Listed Buildings and Conservation Areas) Act 1990, The Historic Environment (Wales) Act 2016 and through implementation of policies within the Gwynedd and Anglesey Joint Local Development Plan and Snowdonia National Park Authority Local Development Plan.

Attributes of Outstanding Universal Value have been defined and articulated in The Slate Landscape of Northwest Wales Property Management Plan which establishes the over-arching strategies and mechanisms by which the serial property will be managed. This is complemented at local level by a series of Local Management Plans, developed in collaboration with landowners, which include site-specific information and practical recommendations. Responsibility for the implementation of the Management Plan will sit with a multi-organisational Partnership Steering Group established by the lead organization, to which an appointed World Heritage Coordinator will report. All of the serial component parts of the property lie within areas of Wales that are already subject to strong levels of landscape protection through designation as a National Park and registration as Landscapes of Outstanding Historic Interest. These will serve as an added layer of protection to the setting and key views into and out of the serial property, through a strict enforcement of the statutory mechanisms in place. There is no active quarrying or mining within the serial property; mineral activity takes place in the wider protected area outside the boundaries of the serial property. The application of existing statutory management procedures will ensure this does not negatively impact upon the Outstanding Universal Value of the serial property. 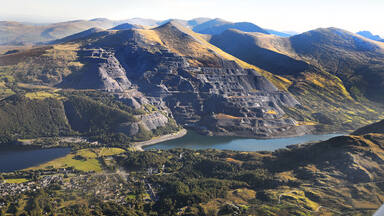