Located in a rural area of northwest England, free from radio interference, Jodrell Bank is one of the world's leading radio astronomy observatories. At the beginning of its use, in 1945, the property housed research on cosmic rays detected by radar echoes. This observatory, which is still in operation, includes several radio telescopes and working buildings, including engineering sheds and the Control Building. Jodrell Bank has had substantial scientific impact in fields such as the study of meteors and the moon, the discovery of quasars, quantum optics, and the tracking of spacecraft. This exceptional technological ensemble illustrates the transition from traditional optical astronomy to radio astronomy (1940s to 1960s), which led to radical changes in the understanding of the universe. 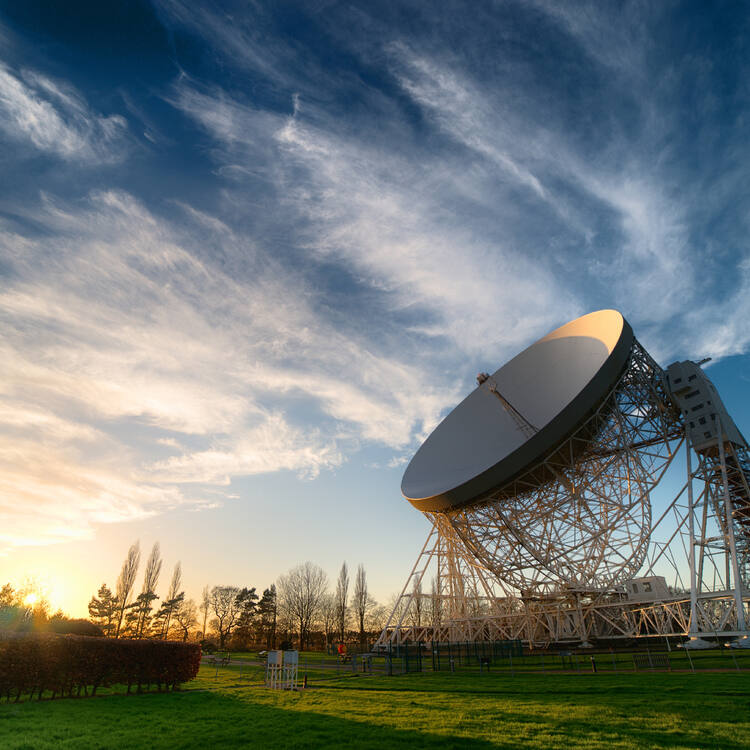 Jodrell Bank Observatory was important in the pioneering phase and later evolution of radio astronomy. It reflects scientific and technical achievements and interchanges related to the development of entirely new fields of scientific research. This led to a revolutionary understanding of the nature and scale of the Universe. The site has evidence of every stage of the history of radio astronomy, from its emergence as a new science to the present day.

Jodrell Bank Observatory is located in a rural area in northwest England. Originally, scientific activity was located at the southern end of the site, and from that time activity has moved to the north across the site with many new instruments developed and then abandoned. Remnants of early scientific instruments survive.

At the south end of the site is the location of the Mark II Telescope and it is bounded by an ensemble of modest research buildings in which much of the early work of the Observatory took place.

Jodrell Bank Observatory is the hub of the UK’s national wide array of up to seven radio telescopes (e-MERLIN) including the Lovell and Mark II Telescopes.

Criterion (i): Jodrell Bank Observatory is a masterpiece of human creative genius related to its scientific and technical achievements. The adaptation and development of radar and radio frequency reflectivity to develop radically new equipment, such as the Transit Telescope and Lovell Telescope, were a key part in the development of entirely new fields of scientific research and led to a dramatic change in the understanding of the Universe. The Observatory was important in the pioneering phase and later evolution of radio astronomy.

Criterion (ii): Jodrell Bank Observatory represents an important interchange of human values over a span of time and on a global scale on developments in technology related to radio astronomy. The scientific work at Jodrell Bank was at the heart of a global collaborative network. In particular, several important technological developments such as very large paraboloidal dish telescopes and interferometer were developed at the Observatory, and were later influential in scientific endeavours in many parts of the world.

Criterion (iv): Jodrell Bank Observatory represents an outstanding example of a technological ensemble which illustrates a significant stage in human history (1940s-1960s) – the transition from optical astronomy to radio astronomy and the associated consequence for the understanding of the Universe through multi-wavelength astrophysics. The property is also associated with the peacetime development of ‘Big Science’ as a major change in the way in which scientific research was supported and undertaken. The surviving evidence at the property related to the evolutionary development of radio astronomy from the post-war pioneering phase through to sophisticated, large scale research activity in the field makes Jodrell Bank an outstanding example of such a technological ensemble.

Criterion (vi): Jodrell Bank Observatory is directly and tangibly associated with events and ideas of outstanding universal significance. The development of the new field of radio astronomy at the property lead to a revolutionary understanding of the Universe which was only possible through research beyond the possibilities of optical astronomy to explore the electromagnetic spectrum beyond visible light. Understanding of the nature and scale of the Universe has been dramatically changed by research in radio astronomy at the Observatory.

The property retains all attributes that document its development as a site of pioneering astronomical research. Practically all stages of development from the very beginning, with improvised, re-used or borrowed equipment, onwards are represented by buildings, physical remains or in some cases archaeological remnants. Some important stages, such as represented by the large Transit Telescope, have not survived intact although traces remain. The later, large scale and far more ambitious instruments are still present at the property. This includes the iconic Lovell Telescope with its Control Building. The property also retains many quite modest structures which are, none the less, important for their research use, or which otherwise supported the work of the Observatory.

In general, all the structures are very well preserved and the property continues to be dominated by the large scale Lovell Telescope and Mark II Telescope. However, several early wooden buildings have suffered from neglect and dis-use. Their restoration is to be undertaken. The grounds are well cared for. Recent buildings have a simple and subdued character, which do not detract from the overall appreciation of the property.

The Consultation zone, buffer zone of the property, protects the scientific capabilities of the Observatory from radio emissions in its vicinity, contributing to maintenance of the functional integrity of the property.

The location of the property has continued unchanged, and the largely agricultural setting is essentially identical apart from the construction of the Square Kilometre Array building as part of the ongoing scientific use of the Observatory. The form and design has evolved through time reflecting the important development history of the property. This includes the somewhat improvised character of many structures indicative of the priority given to scientific research rather than the quality of buildings. Materials and substance have been mostly retained although there has been some replacement of deteriorated materials over time. The property retains its ongoing scientific use.

Most of the attributes of Jodrell Bank Observatory have been listed under the Planning (Listed Buildings and Conservation Areas) Act 1990. The two major telescopes have been listed in the highest category, Grade 1. There are some elements which have no listing at the present time, although they are managed for their heritage values as part of the property.

In addition, World Heritage inscription affords all attributes a protection status equivalent to the highest level or Grade 1, in accordance with the National Planning Policy Framework (2012) and the spatial planning system which operates through several pieces of legislation, including the Town and Country Planning Act 1990. Any changes to listed buildings require approval.

The property is managed by the University of Manchester with a committee, the Jodrell Bank Site Governance Group responsible for coordination. This committee includes key internal stakeholders such as the three main site user groups. Each of the site user groups has its own well-developed and independent management and operational structures. Roles managing the heritage of the Observatory are integrated with the daily work of the Jodrell Bank Centre for Astrophysics, responsible for scientific and engineering research, telescope operations and engineering, and the Jodrell Bank Discovery Centre which is responsible for visitor management and heritage coordination. These user groups are supported by other management groups within the University. The third site user group is the Square Kilometre Array Organisation, located just outside the property within the buffer zone but within the overall Observatory.

The Observatory has a long experience with managing visitors. There is a current tourism management plan and enhanced presentation of the property is ongoing.