Lying on a bend of the Ayeyarwady River in the central plain of Myanmar, Bagan is a sacred landscape, featuring an exceptional range of Buddhist art and architecture. The seven components of the serial property include numerous temples, stupas, monasteries and places of pilgrimage, as well as archaeological remains, frescoes and sculptures. The property bears spectacular testimony to the peak of Bagan civilization (11th -13th centuries CE), when the site was the capital of a regional empire. This ensemble of monumental architecture reflects the strength of religious devotion of an early Buddhist empire. 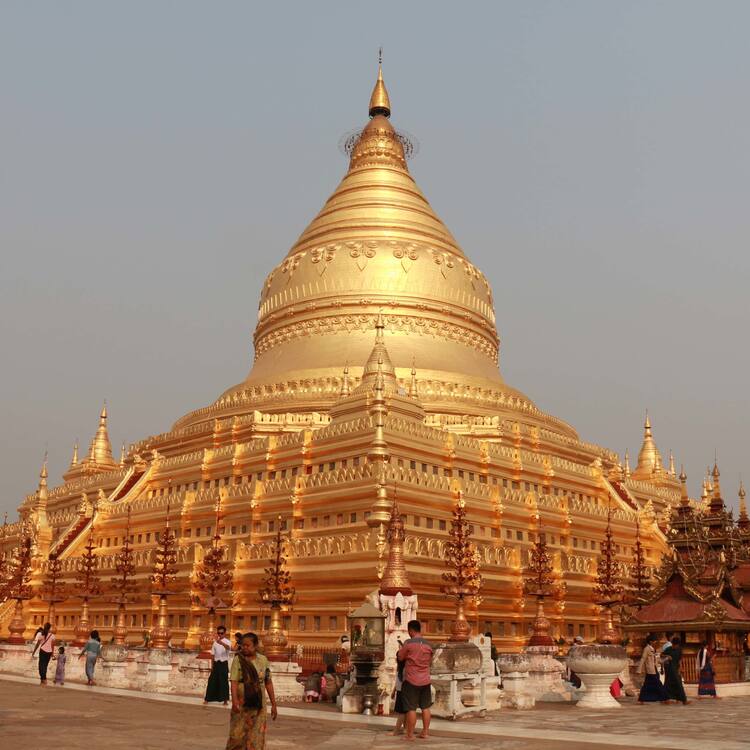 Bagan is a sacred landscape which features an exceptional array of Buddhist art and architecture, demonstrates centuries of the cultural tradition of the Theravada Buddhist practice of merit making (Kammatic Buddhism), and provides dramatic evidence of the Bagan Period (Bagan Period 11th – 13th centuries), when redistributional Buddhism became a mechanism of political control, with the king effectively acting as the chief donor. During this period, the Bagan civilisation gained control of the river transport, extending its influence over a large area. The traditions of merit making resulted in a rapid increase in temple construction, peaking in the 13th century. The serial property of eight components is located on a bend in the Ayeyarwady River, in the central dry zone of Myanmar. Seven of the components are located on one side of the River, and one (component 8) is located on the opposite side. Intangible attributes of the property are reflected in Buddhist worship and merit-making activities, traditional cultural practices and farming. The serial property of eight components consists of 3,595 recorded monuments – including stupas, temples and other structures for Buddhist spiritual practice, extensive archaeological resources, and many inscriptions, murals and sculptures. Bagan is a complex, layered cultural landscape which also incorporates living communities and contemporary urban areas.

Criterion (iii): Bagan is an exceptional and continuing testimony to the Buddhist cultural tradition of merit making, and to the peak of Bagan civilisation in the 11th-13th centuries when it was the capital of a regional empire.

Criterion (iv): Bagan contains an extraordinary ensemble of Buddhist monumental architecture, reflecting the strength of religious devotion of an early major Buddhist empire. Within the context of the rich expressions and traditions of Buddhist architecture and art found throughout Asia, Bagan is distinctive and outstanding.

Criterion (vi): Bagan is an exceptional example of the living Buddhist beliefs and traditions of merit making, expressed through the remarkable number of surviving stupas, temples and monasteries, supported by continuing religious traditions and activities. While the evidence of practices of merit-making are common in many Buddhist sites and areas, the influences established in the Bagan period, and the scale and diversity of expressions, and continuing traditions make Bagan exceptional.

The integrity of Bagan is based on the ability of the 8 components to convey the Outstanding Universal Value; the material evidence of the landscape, archaeological sites, monuments, inscriptions, sculptures, murals, cloth paintings and the overall setting; the continuing intangible heritage and cultural practices; and the management of pressures on the state of conservation. The integrity is vulnerable due to the multiple factors affecting Bagan, tourism and development pressures, environmental pressures and natural disasters.

The authenticity of Bagan is demonstrated by the landscape of Buddhist monuments of diverse sizes, scales, materials, designs and antiquity; and the rich and continuing religious and cultural traditions. The major built elements within the property, particularly the very large temples and stupas, retain a high degree of authenticity in their form and design, both internally and externally. The decorative elements of many of the individual monuments survive in their original form. The authenticity has been impaired by inappropriate interventions from the 1970s and 1990s, and by the extensive damages that resulted from earthquakes.

Heritage zoning plans have been established and integrated into regional plans to ensure coordination. A further protective zone of 100 km x 100 km around the property has been established to control development. All developments within the protected zones are currently subject to site-specific archaeological assessment and input from the Department of Archaeology and National Museum (DANM).

The Bagan National Coordinating Committee (BAGANCOM) has been established by the national government as the decision-making body for Bagan, ensuring inter-agency coordination. The main factors affecting Bagan are past conservation interventions, tourism and development pressures, environmental pressures and natural disasters.

Some key strategic and policy documents, including the Sustainable Tourism Strategy, Archaeological Risk Plan, Agriculture Sector Strategy and Heritage Impact Assessment System are yet to be completed and/or fully operationalised. The property contains a number of intrusive elements, such as hotels. Rigorous Heritage Impact Assessment and clear decision making processes about development are critically important to the future management of Bagan. A long-term Hotels Strategy that identifies zones where hotels can be developed in the future has been recommended.