This serial property combines 28 sites, located in Bosnia and Herzegovina, western Serbia, western Montenegro and central and southern Croatia, representing these cemeteries and regionally distinctive medieval tombstones, or stećci. The cemeteries, which date from the 12th to 16th centuries CE, are laid out in rows, as was the common custom in Europe from the Middle Ages. The stećci are mostly carved from limestone. They feature a wide range of decorative motifs and inscriptions that represent iconographic continuities within medieval Europe as well as locally distinctive traditions. 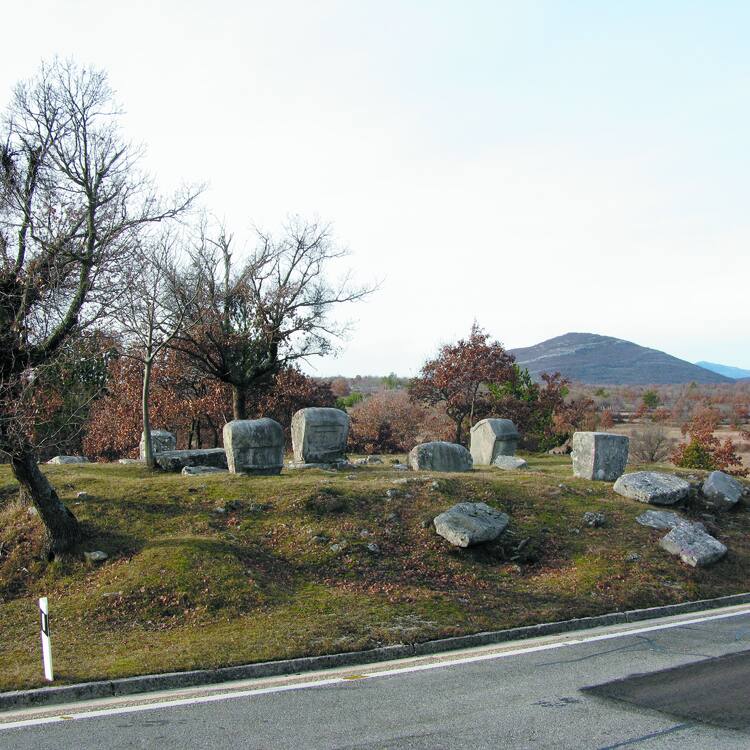 The serial property of 28 component sites includes a selection of 4,000 medieval tombstones (stećci) on the territory of four states: Bosnia and Herzegovina, the Republic of Croatia, Montenegro and the Republic of Serbia. These monolithic stone tombstones (stećci) were created in the period from the second half of the 12th century to the 16th century, although they were most intensively made during the 14th and 15th centuries. The stećci are exceptional testimony to the spiritual, artistic and historical aspects of the medieval cultures of southeastern Europe, an area where traditions and influences of the European west, east and south entwined with earlier traditions. The stećci are notable for their inter-confessionality, used for burial by all three medieval Christian communities, including the Orthodox Church, the Catholic Church and the Church of Bosnia (which lasted for about three centuries until the second half of the 15th century). The characteristics that distinguish stećci from the overall corpus of Europe’s medieval heritage and sepulchral art, include the vast number of preserved monuments (over 70,000 located within over 3,300 sites), the diversity of forms and motifs, the richness of reliefs, epigraphy and the richness of the intangible cultural heritage. The selected components represent a range of graveyard scales and settings.

Criterion (iii): A remarkable number of stećci, of diversified form, are found in this part of southeast Europe, conveying an exceptional testimony to medieval European artistic and archaeological heritage, with traces of earlier influences (prehistoric, roman and early medieval). The extremely large number of preserved stećci (estimated to be more than 70,000) and variety of their forms (slabs, chests, gabled roof tombstones, pillars and monumental crosses) are well represented. Their reliefs, including decorative, symbolic, and religious motives as well as scenes from everyday life, are an extraordinary testimony of medieval culture. Inscriptions in the selected graveyards offer an exceptional historical resource, and are associated with the cultures and histories of the medieval states in this region.

Criterion (vi): The stećci have been deeply embedded in historical and continual cultural traditions and beliefs and toponyms demonstrate the historical meanings and significance of the stećci. The stećci are associated with local folk and fairy tales, superstitions and customs; and their epigraphy and reliefs have significantly influenced the contemporary literature and other forms of art in all four countries, but also wider in the region.

The integrity of the serial property is based on the ability of the selected 28 components to represent the widespread phenomena, importance and diversity of the stećci in southeast Europe. Each of the components has been conserved in situ. The state of conservation of the burial grounds and tombstones is generally stable, and each of the components are relatively well preserved. Their conditions could be improved through maintenance and active management to prevent natural processes of deterioration. The tombstones are not currently affected by development pressures. The boundaries of the components include the attributes necessary to express the Outstanding Universal Value of the serial property. Some of the buffer zones were revised during the evaluation process to better incorporate and preserve the important characteristics of the settings in which the burial grounds are located.

The authenticity of the serial property is established through the graveyards, tombstones (stećci) and associated sepulchral art of the medieval period. The stećci demonstrate the merging of religions, chivalry and folk cultures of this period. The authenticity of the selected components is demonstrated by the archaeological and historical contexts and evidence, the diversity of types of tombstones, and the widespread occurrence of this phenomenon in this part of southeast Europe. The authenticity of the sites was one of the bases on which the selection of components was made. The stećci were carved from single stone which reflected the skills and knowledge of the master craftsmen. Decorations and inscriptions testify original aspects of the emergence and study of stećci.

Legal protection of the 28 sites with stećci is ensured by the legislation applicable in the participating States Parties. Although the legal and administrative systems for the protection and management of cultural heritage differ, the highest level of protection in each of the States Parties has been provided for the graveyards and tombstones. Transnational coordination is established through the International Coordination Committee and through the implementation of common strategies, principles and standards. Each State Party is responsible for the protection, conservation and management of necropolises with stećci tombstones that are on its territory.

Common management plan documents have been prepared for each inscribed component by the four States Parties. These documents ensure the management of each component of the serial property according to an agreed approach and a common vision, uniform conservation standards, shared management principles and shared presentation objectives. Each of the four States Parties has appointed a coordinator, and together they form the International Coordination Body responsible for the development of the joint management of the serial transnational property.

Inventorying and research about the stećci have been a focus since the 1970s and is ongoing. There is a need to continue to improve the mapping and cataloguing of the inscribed components in line with the management system. The inscribed components are generally in a stable state of conservation, with minimal interventions. The main pressures are natural processes of physical deterioration, and condition assessments have been incorporated into the site management plans. Continued development and implementation of active conservation programmes based on the advice of expert conservators is required. Community involvement in the management and maintenance of the stećci is evident and active.

There is a need to integrate Heritage Impact Assessments and Disaster Risk Management approaches and mechanisms into the management system, in order to ensure that future proposals, programs or projects are assessed in relation to their potential impact on the Outstanding Universal Value of the serial property.

Visitor pressure is not a current threat. Visitor management is currently planned and implemented at the site level. Presentation and interpretation are approached by promoting the designated sites and other tourist destinations. The management plans outline current and planned tourism infrastructure for each of the components. The monitoring indicators could be augmented by additional measures related to levels of visitation.