The site consists of a group of Georgian-style naval buildings and structures, set within a walled enclosure. The natural environment of this side of the island of Antigua, with its deep, narrow bays surrounded by highlands, offered shelter from hurricanes and was ideal for repairing ships. The construction of the Dockyard by the British navy would not have been possible without the labour of generations of enslaved Africans since the end of the 18th century. Its aim was to protect the interests of sugar cane planters at a time when European powers were competing for control of the Eastern Caribbean. 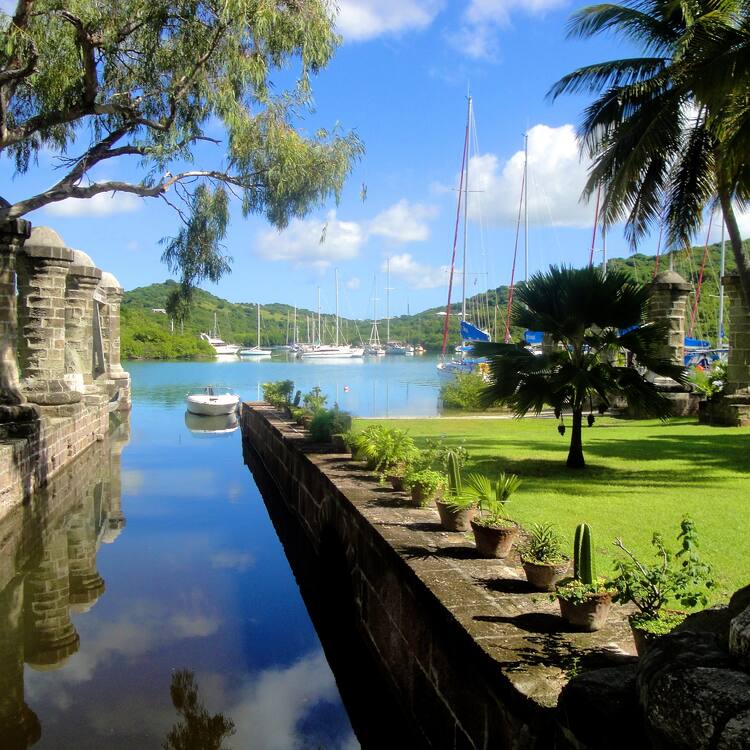 The Antigua Naval Dockyard and its Related Archaeological Sites consists of a group of Georgian Naval structures, set within a walled enclosure, on a naturally-occurring series of deep narrow bays surrounded by highlands on which defensive fortifications were constructed. The Dockyard and its related facilities were built at a time when European nations were battling for supremacy of the seas to obtain control over the lucrative sugar-producing islands of the Eastern Caribbean. Antigua’s location as a front-line naval dockyard facility gave the British navy a strategic advantage over its rivals at a crucial point in history.

The construction and operation of the Antigua Naval Dockyard were made possible through the labour and skills of enslaved Africans, whose contribution was crucial for the establishment of the facility and, more widely, for the development of the British Empire, trade and industrialization.

Criterion (ii): The Antigua Naval Dockyard and its Related Archaeological Sites exhibit an important exchange of human values over a span of time within the Caribbean and between this region and the rest of the Commonwealth, on developments in architecture, technology and exploitation of natural topographical features for strategic military purposes. The enslaved Africans toiling in the service of the British navy and army built and worked the facilities that were critical to the development of the British Empire, trade and industrialization. The Georgian Period buildings and the archaeological structures and remains stand as testimony to their efforts and continue to influence the architectural, social and economic development of their descendants.

The Antigua Naval Dockyard exceptionally shows how British Admiralty building prototypes were adapted to cope with extremes of climate, and the lessons learnt in the Caribbean in erecting such buildings were subsequently successfully applied in other colonies. Among the most prominent witnesses of this interchange, Clarence House demonstrates how English Georgian architecture was modified to suit the hot tropical climate and to counter the threat of disease, and the emergence of a distinctly colonial Caribbean Georgian architecture; and the Officers’ Quarters and the Senior Officer’s House demonstrate how building forms were adapted, by the addition of features such as storm shutters and verandas, to suit the climate of the Caribbean. Few other sites demonstrate this transition from British prototypes to the use of colonial building forms as clearly as the Antigua Naval Dockyard.

Criterion (iv): The ensemble of the Antigua Naval Dockyard and its Related Archaeological Sites were laid down and built exploiting the natural attributes of the area (the deep waters of English Harbour, the series of hills protecting the bay, the jagged contours of the coastline, and the narrow entrance) in a period when European powers were at war to expand their spheres of influence in the Caribbean. Altogether, the property represents an outstanding example of a Georgian naval facility in the Caribbean context.

The Antigua Naval Dockyard and its Related Archaeological Sites demonstrate the process of colonization and the global spread of ideas, building forms and technologies by a leading naval power in the 18th century, as well as the exploitation of favourable geo-morphological features for the construction and defence of a strategic compound.

The inscribed area (255 ha) coincides with the former Naval Dockyard installations and its related former supporting/defensive compounds, which have been in continuous use since 1725. The partially-walled Dockyard includes an important number of historical buildings, whereas the related former supporting/defensive compounds comprise several structures nowadays reduced to archaeological remains. The property still retains its visual integrity and the visual relationships and dynamics between the Dockyard complex (down at sea level) and the former military structures (in the surrounding hills) are still recognizable. Most of the buildings at the Dockyard have either been restored/repaired (fairly recently) or are scheduled to undergo restoration in the near future. On the other hand, archaeological structures outside the Dockyard exhibit an uneven state of conservation that will benefit from a comprehensive conservation strategy based on the adoption of a minimal intervention approach.

The Dockyard is located on its original site and continues to be embedded in the same original setting. The buildings within were all originally built between the 18th and 19th centuries and retain their original form and design. Most of them even retain their use and function, and those which do not are used for similar and/or compatible functions. The authenticity of the property in terms of materials, craftsmanship and design will benefit from a continuous cooperation amongst conservation architects, architectural historians and archaeologists in the conception of conservation programmes, projects and works. Archaeological remains are still embedded in a setting which is comparable to the original one; many of the fortifications and supporting facilities retain their original materials and their visual interrelations. Their form and design have not been altered and can be appreciated through archaeology, historical research, consolidation, stabilization and interpretation. The informative potential of archaeological vestiges is overall retained; however, protection and maintenance strategies should be set up in order to avoid further loss of historic substance.

The Antigua Naval Dockyard and Related Archaeological Sites have been protected as a National Park since 1984 under the National Parks Act and managed by the National Parks Authority (NPA). Further means of legal protection are obtained by the recently approved new ‘Environmental Management Bill’ (2015) the forthcoming new ‘Heritage Act’, the ‘Physical Planning Act’ (2003), and the ‘Land Use or Physical Development Plan for Antigua and Barbuda’, which defines and establishes zones for appropriate land use. Building Guidelines have been designed to orient conservation interventions of historical buildings and archaeological remains and to set standards for new architecture and new guidelines; high standards regarding the Dockyard’s potential Underwater Cultural Heritage are also needed.

The system relies on the National Parks Development and Management Plan, which is specifically prepared under the provisions of sub-section 10 (2) of the Antigua and Barbuda National Parks Act (1984). The Management Plan, with its objectives and its operational instruments (land use zoning plan, action plan, conservation plan, marketing plan, guidelines, etc.) forms an integrated management framework that needs to focus on the Outstanding Universal Value of the Antigua Naval Dockyard and Related Archaeological Sites so as to ensure its effective management as a World Heritage property.