The site is located along the Weser River on the outskirts of Höxter where the Carolingian Westwork and Civitas Corvey were erected between AD 822 and 885 in a largely preserved rural setting. The Westwork is the only standing structure that dates back to the Carolingian era, while the original imperial abbey complex is preserved as archaeological remains that are only partially excavated. The Westwork of Corvey uniquely illustrates one of the most important Carolingian architectural expressions. It is a genuine creation of this period, and its architectural articulation and decoration clearly illustrate the role played within the Frankish empire by imperial monasteries in securing territorial control and administration, as well as the propagation of Christianity and the Carolingian cultural and political order throughout Europe. 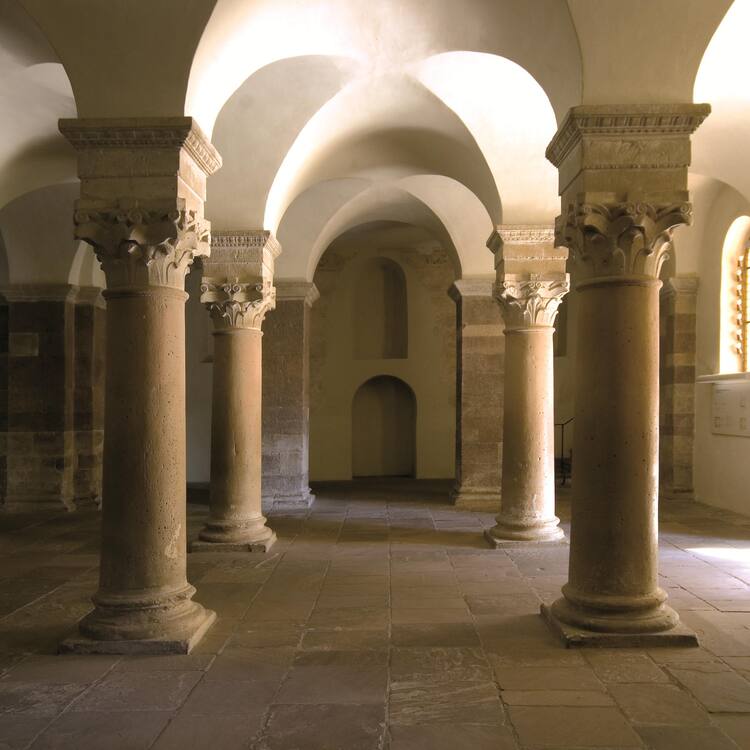 Surrounded by a still largely preserved rural setting and revealed from a distance by the pointed roofs and the bare-stone towers of the westwork, the Carolingian Westwork and the Civitas Corvey lie along the western side of the river Weser in the east of the town of Höxter, in North Rhine-Westphalia, close to the border of Lower Saxony. The Westwork of Corvey in Höxter on the River Weser is one of the few Carolingian structures of which the main parts have been preserved, and the only example of a westwork building from that time still standing. It combines innovation and references to ancient models at a high level. As a building type it has considerably influenced western ecclesiastical Romanesque and Gothic architecture. Corvey was one of the most influential monasteries of the Frankish Empire. Its missionary task was highly important with regard to politico-religious processes in many parts of Europe. As an imperial abbey, Corvey not only had intellectual and religious functions with regard to the conversion of Saxony and adjacent areas but was also of political and economic importance as an outpost of the Frankish Empire on the edge of the Christian world at that time. The original preserved vaulted hall with columns and pillars on the ground floor and the main room encircled by galleries on three sides on the upper floor make Corvey one of the most striking examples of the “Carolingian Renaissance”. This applies to the documented original artistic decoration of the elements which still exist on the ground and on the upper floors, including life-size stucco figures and mythological friezes presenting the only known example of wall paintings of ancient mythology with Christian interpretation in Carolingian times. The structure and the decoration refer to the world of ideas of Carolingian times which has become an essential part of western history. Corvey is linked with cultural centres in Europe through historical tradition as well as through the preserved design of the building and archaeological evidence from beyond the former Carolingian empire. An inscription tablet originating from the time of the foundation of the monastery names the Civitas Corvey which can be identified with the area of the monastery by archaeological evidence. The deserted town close to the Westwork and the monastic compound preserves archaeological evidence of a quite important settlement of the Early and the Late Middle Ages.

Criterion (ii): Corvey possesses the only almost completely preserved Carolingian Westwork. The central main room on the upper floor which is encircled on three sides by galleries is based on ancient styles in its form and its original artistic decoration for secular rooms of representation; the arch in the entrance hall also uses ancient construction techniques. All in all, the Westwork formed the basis for further technical and morphological developments in ecclesiastical architecture in the Romanesque and Gothic periods, further reinterpreted in the Baroque narrative.

Criterion (iii): The main room on the upper floor served liturgical purposes and high-status uses. The wider monastic area around the monastery itself, which was fortified in 940 at the latest, with its school and library and which served as a religious, cultural and economic centre, was already established during Carolingian times and included a pilgrims hospice, dwellings for guests and servants, working quarters and workshops. The political and cultural revival under the Carolingians on the edge of the Frankish Empire manifested itself in this complex.

Criterion (iv): The Westwork of Corvey abbey is an outstanding testimony to Carolingian building and monastic culture, which was not solely an expression of religious content and clerical goals but also an instrument to secure sovereignty and to develop the country. As archaeological monuments, the former fortified monastic compound and the medieval town which grew from the Carolingian centres of settlement around it, are outstanding documents of political, cultural and economic life in the Middle Ages.

The architecturally preserved Westwork and the formerly fortified monastery district which is a protected archaeological monument are comprehensible in terms of location and in their general context. The monastery complex has been preserved in its original size and its integration in the natural environment is undisturbed.

The baroque monastery complex contributes to the continuity of the monastic and religious functions of the site throughout the centuries; the reconstruction of the church in its baroque form has allowed the retention of the religious use of the Westwork over time and up to the present day. The buried traces of the fortified village outside the monastery also strengthen the understanding of the important role played by Corvey Abbey in the settlement pattern of the region. The still preserved rural setting constitutes the appropriate context for the understanding and appreciation of the significance of the nominated property.

The Westwork of Corvey abbey on the River Weser is one of the very rare preserved structures with Carolingian fabric and form right the way up to the roof and probably the only structure – through the towering front in its outward appearance – through which the lordly pretensions of Carolingian culture still appears directly vivid today. The form and the design of the Carolingian Westwork are largely preserved in its original substance and material. Its wall paintings are the only known example of integrated elements of profane ancient iconography in the mural schemes of Carolingian sacred rooms. Corvey offers the only reliably analyzed source of knowledge about the painting of flat and vaulted plaster ceilings in Carolingian times.

Sinopias, preparatory background drawings in red ochre pigment, and stucco fragments of the Westwork are the most important evidence of large-scale sculptures from Carolingian times north of the Alps and at that time the most convincing evidence for the close conceptual and manual synthesis of wall painting and ornamental sculpture in the decoration system of this era. The ground of the former fortified monastery district is of particular value as an archaeological monument because here discoveries and finds from a systematically built large Carolingian monastery with related dwelling and work areas, graveyards and chapel buildings have been largely preserved, unaffected by later destruction. The same applies to the remnants of the settlement preserved in the ground in front of the monastery’s gates which was deserted in the Late Middle Ages and grew to become a town in the 12th century, in which an early urban development without major destruction caused by later settlement activity can be archaeologically traced.

The former St Stephanus and Vitus abbey church and the former monastery complex have been inscribed in the historic monument register of the town of Höxter as an architectural monument since 1 June 1986 and the archaeological remains (Civitas) as an underground monument since 3 September 1990. The Westwork and the former abbey church are in the possession of the St Stephanus and Vitus parish of Höxter, the former monastery complex is owned by Viktor, Duke of Ratibor and Prince of Corvey. Restoration and renovation works on the buildings as well as archaeological measures are carried out by the owners in close co-operation with the church and responsible government authorities. Changes and building measures on monuments and in areas of archaeological remains are subject to authorization according to paragraph 9 DSchG NW. Building activities in the buffer zone and within the visual perspectives are governed by land development plans, building development plans, and statutes concerned with renovation and preservation. Ad-hoc protective measures protect the panoramic views from and towards Corvey.

Restauration and renovation works on the buildings as well as archaeological measures and the general management of the property are carried out by the owners in close cooperation with the church and government authorities in charge. The Kulturkreis Höxter-Corvey gGmbH is responsible for the management of the museum, cultural and educational programmes. Long term sustenance of the Outstanding Universal Value is granted by the formalisation and implementation of the management plan and its operational instruments. Particular care should be paid when planning the introduction or upgrading of infrastructure within the wider setting of the property.