This geological site comprises a 15 km-long fossil-rich coastal cliff, offering exceptional evidence of the impact of the Chicxulub meteorite that crashed into the planet at the end of the Cretaceous, about 65 million years ago. Researchers think that this caused the most remarkable mass extinction ever, responsible for the disappearance of over 50 per cent of all life on Earth. The site harbours a record of the cloud of ash formed by the impact of the meteorite – the exact site being at the bottom of the ocean off the coast of Mexico’s Yucatán Peninsula. An exceptional fossil record is visible at the site, showing the complete succession of fauna and micro-fauna charting the recovery after the mass extinction. 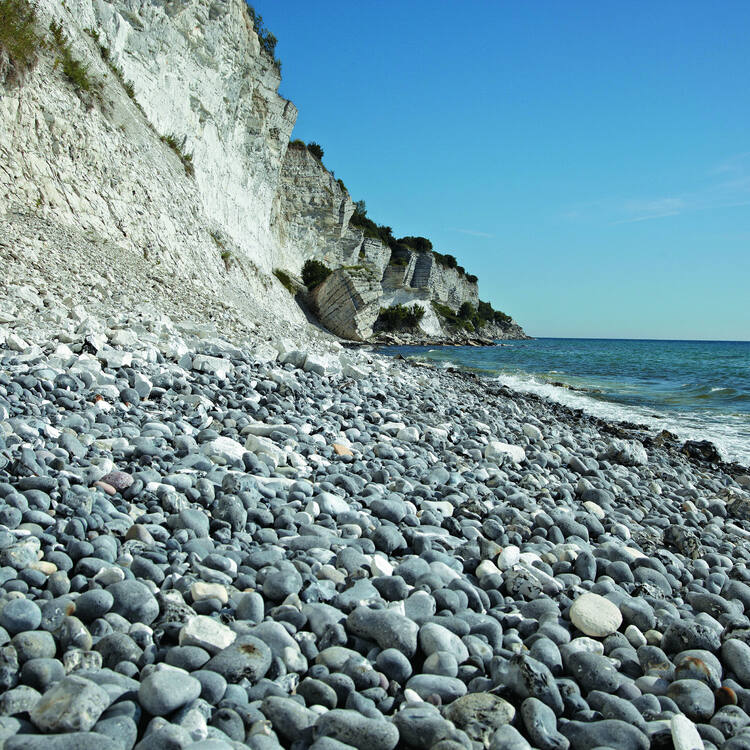 Stevns Klint is a globally exceptional testimony to the impact of meteorite impact on the history of life on Earth. The property provides evidence of the Chixulub meteorite impact that took place at the end of the Cretaceous Period, c.67 million years ago, and is widely believed to have caused the end of the Age of the Dinosaurs. The property has further iconic scientific importance due to its association with the radical theory for asteroid driven extinction developed through the seminal work of Walter and Luis W Alvarez, with their co-workers. Stevns Klint is highly significant in terms of its past, present and future contribution to science, and makes these values accessible to the wider global community as a whole.

Criterion (viii): Stevns Klint is a globally exceptional testimony to the impact of meteorite impact on the history of life on Earth. The property provides a globally exceptional representation of the evidence of the Chixulub meteorite impact that took place at the end of the Cretaceous Period, c.67 million years ago. This impact is widely believed by modern scientists to have caused the end of the Age of the Dinosaurs, and led to the extinction of more than 50% of life on Earth. This is the most recent of the major mass extinctions in Earth’s history. Comparative analysis indicates this is the most significant and readily accessible site, of hundreds available, to see the sedimentary record of the ash cloud formed by the meteorite impact, the actual site of the impact being deep underwater offshore the Yucatan peninsula. In addition, the site has iconic scientific importance as the most significant and accessible of the three localities where the radical theory for asteroid driven extinction was developed through the seminal work of Walter and Luis W Alvarez, with their co-workers. Stevns Klint is highly significant in terms of its past, present and future contribution to science especially pertaining to the definition of and explanation of the Cretaceous/Tertiary (K/T) boundary.

The outstanding fossil record at Stevns Klint provides a succession of three biotic assemblages including the most diverse end-Cretaceous marine ecosystem known. The million years recorded in the rock at Stevns Klint provides evidence of a climax pre-impact community, fauna that survived a mass extinction event, and the subsequent faunal recovery and increased biodiversity following this event. The fossil record shows which taxa became extinct and which survived and reveals the tempo and mode of evolution of the succeeding post impact fauna that diversified to the marine fauna of today, thus providing important context for the main K/T boundary layer exposed at Stevns Klint.

The property contains the coastal rock exposures that are of Outstanding Universal Value. There is a small break in the site where an active quarry is located, in the buffer zone, resulting in the site being a serial property. Boundaries along the cliff address and accommodate the natural erosion processes of the sea, and include the beach area where eroded blocks fall as natural erosion progresses. The landward and seaward buffer areas are adequate.

Existing human made exposures landward of the cliff also support the integrity of the site. These exposures are in areas that include two abandoned quarries and tunnels that had historically been used for military purposes. The inclusion of these areas enhances opportunities for visitor services and interpretation and supports further understanding related to the three dimensions of the paleo-seascape. These anthropogenic features, based on calculated rates of sea level rise and planned coastal management strategies, are durable as accessible exposures for hundreds of years.

The property benefits from overlapping national and local legislation, and has an up to date management plan supported through local government planning strategies. The property is protected from development and will continue to evolve as a natural and unprotected stretch of coastline.

A specific organizational structure for management of the property has been designed to support management needed following inscription on the World Heritage list. The site is governed and managed through a steering group with representation from state, regional governments, and landowners including private (majority of the nominated property is privately owned) and public. The steering group is complemented by a local organization with a board of directors, a secretariat supported by a Director and Site Manager, and two standing committees (a local reference group and a scientific reference group).

There is strong community support for the nomination, and a co-management approach with a range of partners including local government, the local museum, NGOs and private sector interests. Sustained and adequate finance for the management of the property is a long-term requirement. Project funding has been secured with a plan for securing sustainable funding based on a five-year management cycle. Ongoing management funding will be provided through the local government. Both national level and private sector involvement in the management of the site will also provide support to the property.

There are some threats to the property that require continued attention. There is notable visitation, and projections that this will increase. This has the potential to negatively impact the fossil heritage through uncontrolled/poorly managed fossil collecting. This threat is managed through the legislative framework for protection of natural heritage in Denmark and regional and municipal planning to support the protection of the nominated property. Guidelines are in place that regulate collecting and also zoning the property for managing visitation along the coast. It will be of additional importance that tourism and visitation is part of a local strategy for sustainable tourism, and that effective education, interpretation and curation facilities are provided.

The property is protected from extractive use, in line with the principle that such uses are incompatible with World Heritage property status, and the State Party has provided a series of examples of cases where government has denied requests for extraction of resources to ensure the protection of natural heritage values. A dormant claim for quarrying adjoining the property expires in 2028 and will not be renewed, nor activated prior to its expiry.