The List Jewish Quarter and St Procopius' Basilica in ...
Print

The ensemble of the Jewish Quarter, the old Jewish cemetery and the Basilica of St Procopius in Třebíč are reminders of the co-existence of Jewish and Christian cultures from the Middle Ages to the 20th century. The Jewish Quarter bears outstanding testimony to the different aspects of the life of this community. St Procopius' Basilica, built as part of the Benedictine monastery in the early 13th century, is a remarkable example of the influence of Western European architectural heritage in this region. 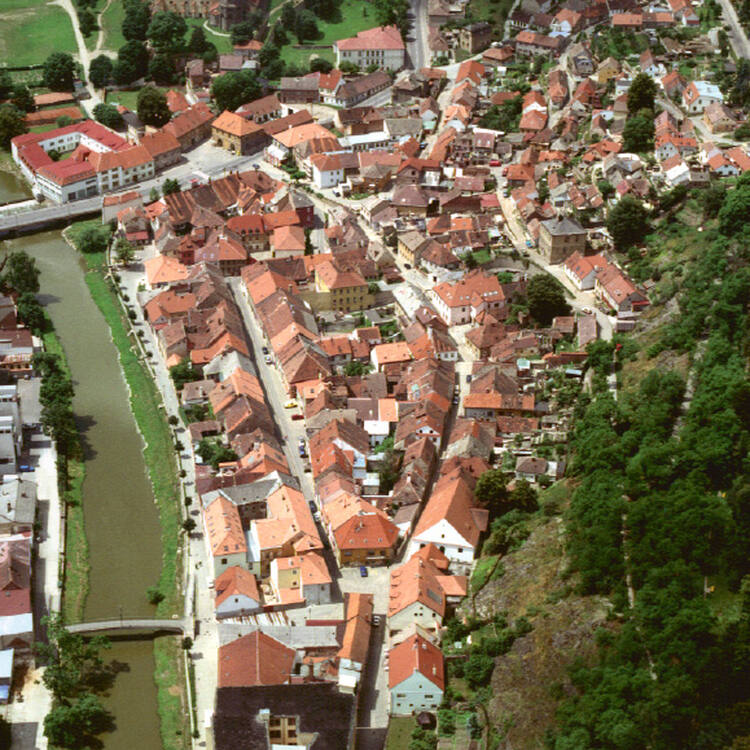 The property includes the Jewish Quarter (former ghetto), the Jewish Cemetery and the St. Procopius' Basilica. It is situated in the town of Třebíč, located in the Vysočina Region, in western Moravia, Czech Republic. The ensemble provides an exceptional testimony to the peaceful coexistence of Jewish and Christian communities and cultures from the Middle Ages up to World War II.

The Jewish Quarter grew spontaneously along the Jihlava River. It bears witness to various aspects of the life of this community forced to live in limited space due to political constraints. The Jewish Quarter has retained its original street plan, its typical spatial arrangement, as well as its social functions, such as the synagogues and the schools, as well as a former leather factory.

A typical building of this quarter is distinguished by a condominium structure, a highly complex form and diversity of style. On the street level, there was often a shop or a workshop; the upper levels were reserved for residential use. A wide range of historic details has been preserved, such as the types of roofing, the architectural expression of the facades and some original interiors (vaulted ground floors, one or two upper floors with wooden ceilings).

The Jewish cemetery lies outside the Jewish Quarter, behind the hill. It has two parts, the first part dates from the 15th century, and the second from the 19th century. There are some 4,000 tomb stones; some carvings are important.

Criterion (ii): The Jewish Quarter and St. Procopius Basilica of Třebíč bear witness to the coexistence of and interchange of values between two different cultures, Jewish and Christian, over many centuries.

Criterion (iii): The Jewish Quarter of Třebíč is an exceptional testimony to the cultural traditions related to the Jewish diaspora in central Europe.

All key elements conveying the Outstanding Universal Value of the property are situated within its boundaries. The definition of the boundaries and the size are appropriate. In the Jewish Quarter, the works done on the buildings had no significant negative impact on their form and character, and no impact on the urban structure. The visual integrity is not threatened, and the spatial and visual relationship between the Jewish Quarter, the Basilica and other historical quarters of the town of Třebíč, situated outside the boundaries of the property, has been preserved. In the buffer zone, new construction and remodelling are regulated in order to preserve the visual integrity of the property.

The ensemble that includes the Jewish Quarter, the Jewish Cemetery and St. Procopius Basilica has a high level of authenticity. The urban fabric of the Jewish Quarter has retained an exceptionally good stratification ranging from the late Middle Ages to the 20th century. Often, in one building, there can be parts that relate to several eras. The vernacular housing stock has been very well preserved; of 121 buildings that were there originally, only 5 were demolished. The individual buildings and the townscape have preserved the authenticity of materials, structures and simple decoration. Many interiors are intact and have a high level of authenticity. Restoration works are carried out in compliance with international standards for heritage conservation, using only historical materials and techniques. The cemetery includes a large number of tomb stones, both from the past centuries and contemporary. The Basilica has retained its historical character and authenticity, despite the various restorations it has undergone during its history.

The property is protected under Act No. 20/1987 Coll. on State Heritage Preservation as amended, since it is located within the urban heritage zone. The buffer zone of the Jewish Quarter and of the St. Procopius Basilica is also located within the urban heritage zone of Třebíč, which moreover has its own protective zone, serving also as a buffer zone of the Jewish cemetery. St. Procopius Basilica and the Jewish Cemetery are designated as national cultural heritage sites, thus enjoying the highest degree of legal protection as regards heritage preservation. A number of buildings of the Jewish Quarter are designated as cultural heritage sites and also enjoy protection related to heritage preservation. The urban heritage zone and its protective zone have a stabilised spatial organisation where no changes are planned.

The property is managed by the town of Třebíč (the Jewish Quarter and the Jewish Cemetery) in cooperation with the Jewish Community of Brno (the synagogues and the cemetery) and the Parish Administration of the Roman Catholic Church (St. Procopius Basilica). The Management Plan of the property is in effect and is scheduled for regular updates. Because of the size of the property and of a complex ownership structure, individual maintenance schedules have been set. Financial instruments for the maintenance and conservation of the heritage sites that are part of the property namely include grant schemes and funding through the programme of the Ministry of Culture of the Czech Republic allocated to the maintenance and conservation rehabilitation of the immovable cultural heritage, as well as financial resources allocated from other public budgets.

From the point of view of heritage preservation, the property is in good state of repair and is subject to regular maintenance. Since its inscription on the World Heritage List, annual monitoring reports have been prepared at the national level to serve the World Heritage property manager, the Ministry of Culture, the National Heritage Institute and other agencies involved.