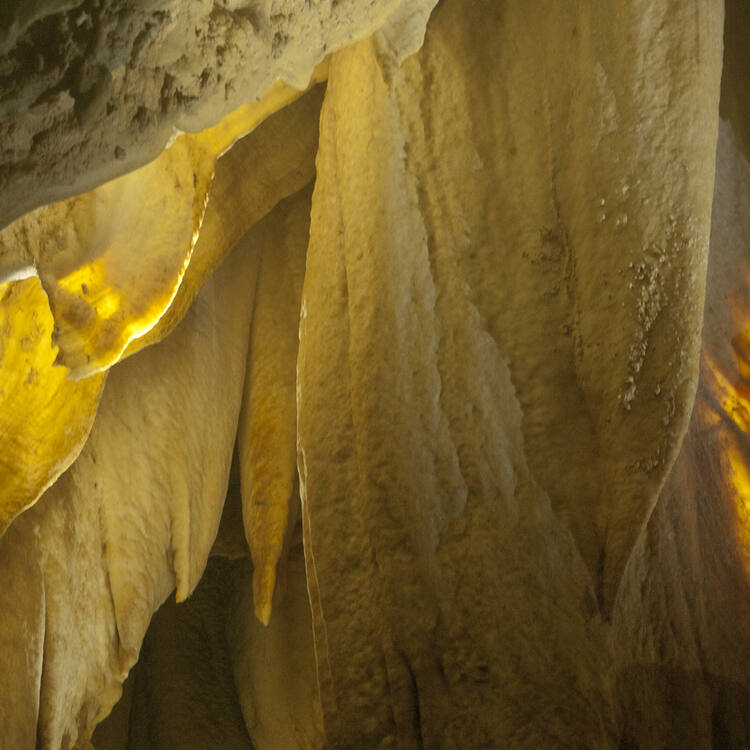 Gunung Mulu National Park, situated in the Malaysian State of Sarawak on the island of Borneo, is outstanding both for its high biodiversity and for its karst features. The park is dominated by Gunung Mulu, a 2,376 m-high sandstone pinnacle and the property is the most studied tropical karst area in the world. The geological Melinau Formation contains a remarkable concentration of caves, revealing a geological history of over more than 1.5 million years.

High in endemism, Gunung Mulu National Park provides significant natural habitat for a wide range of plant and animal species, both above and below ground. The 52,865 ha park contains seventeen vegetation zones, exhibiting some 3,500 species of vascular plants. Its palm species are exceptionally rich, with 109 species in twenty genera recorded, making it one of the worlds richest sites for palm species. Providing protection for a substantial area of Borneo’s primary tropical forest and a home for a high diversity of species, including many endemics and threatened species, the large cave passages and chambers provide a major wildlife spectacle in terms of millions of cave swiftlets and bats.

The property is home to one of the world's finest examples of the collapse process in karstic terrain and provides outstanding scientific opportunities to study theories on the origins of cave faunas.  The deeply-incised canyons, wild rivers, rainforest-covered mountains, spectacular limestone pinnacles, cave passages and decorations found within the property produce dramatic landscapes and breathtaking scenery that is without rival.

Criterion (vii): Gunung Mulu National Park is an area of exceptional natural beauty, with striking primary forest, karst terrain, mountains, waterfalls and the largest caves on earth. Sarawak Chamber, the largest cave chamber in the world, stretches 600 m in length by 415 m wide and 80 m high. With a volume of 12 million cubic meters and an unsupported roof span of 300 m, this chamber dwarfs any other large chamber so far discovered. Deer Cave at 120 to 150 m in diameter is the largest cave passage in the world known at the present time and the Clearwater Cave System holds the world record as the longest cave in Asia at 110 km of mapped and explored passages. As some of the largest caves in the world they contain fine examples of tropical river caves, flood incuts, vadose, and phreatic caves, exhibiting fine examples of all types of speleothems (structures formed in a cave by the deposition of minerals from water).

Criterion (viii): The park is an outstanding example of major changes in the earth’s history. Three major rock formations are evident; the Mulu Formation of Paleocene and Eocene shale’s, and sandstone, rising to 2,376 m at the summit of Gunung Mulu: the 1.5 km thick Melinau Limestone formation of Upper Eocene, Oligocene and Lower Miocene, rising to 1,682 m at Gunung Api; and the Miocene Setap Shale formation outcropping as a gentle line of hills to the west. Major uplift that occurred during the late Pliocene to Pleistocene is well represented in the 295 km of explored caves as a series of major cave levels. The surface and underground geomorphology and hydrology reveal significant information on the tectonic and climatic evolution of Borneo. The sequence of terrestrial alluvial deposits provides an important record of glacial – interglacial cycles with the series of uplifted caves ranging from 28 m to over 300 m above sea level are at least 2 to 3 million years old, indicating uplift rates of about 19 cm per 1,000 years.

Criterion (ix): The property provides significant scientific opportunities to study theories on the origins of cave fauna with over 200 species recorded, including many troglobitic species and it displays outstanding examples of ongoing ecological and biological processes. Seventeen vegetation zones have been identified along with their diverse associated fauna. Some 3,500 species of plants, 1,700 mosses and liverworts and over 4,000 species of fungi have been recorded within the property. There are 20,000 species of invertebrates, 81 species of mammals, 270 species of birds, 55 species of reptiles, 76 species of amphibians and 48 species of fish.

Criterion (x): The property supports one of the richest assemblages of flora to be found in any area of comparable size in the world. It is botanically-rich in species and high in endemism, including one of the richest sites in the world for palm species and contains outstanding natural habitats for in-situ conservation for a large number of species; Deer Cave alone has one of the largest colonies in the world of free tailed bats, Chaerephon plicata at over 3 million. This one cave also has the largest number of different species of bats to be found in a single cave. Several million cave swiftlets (Aerodramus sp.) have been recorded from one cave system, constituting the largest colony in the world. Many species of fauna are endemic and 41 species are included on the endangered species list.

Covering a vast area ranging in altitude from 28 metres to 2,376 metres above sea level and containing steep escarpments and ridges, karst towers, caves, rivers and associated terraces and floodplains, the terrain of the property lends itself to using natural landscape features as boundaries. The boundaries are marked and for the most part follow rivers with short sections of cut boundaries to the south-west, east and north-west. A section of the boundary to the north-west follows the international border with the State of Brunei.

The Government and management agency for the property are in the process of designating two extensions to the property to overcome limits to the current boundaries, as full catchment protection is lacking. Additionally the neighbouring Gunung Buda National Park, covering catchments of high natural significance, will be added to the property, thus strengthening the security and integrity of the property. The Governments of Malaysia and Brunei are also collaborating to establish what will effectively become a buffer zone for the property by using the Labi Forest Reserve in Brunei that adjoins Gunung Mulu National Park. This collaboration builds upon the on-going Heart of Borneo (HOB) Initiative to which the Governments of Malaysia, Brunei and Indonesia are committed.

Research at the park undertaken by both foreign and local researchers has assisted in providing a greater understanding of the property and its resources. Resulting information assists in decision-making and the formulation of management prescriptions. The State Government’s continued policy not to allow road access to the park since its establishment in 1974 ensures that uncontrolled access is greatly minimized. This contributes to the continued maintenance and protection of the park’s pristine conditions and ecological integrity. The land claims by the local people have been confirmed to be outside the boundary of the property and have hence resolved conflicts and issues in regards to land tenure and use within the boundary of the property. The State Government has also confirmed that it has no plan to implement dam projects that would significantly impact on the values of the property.

Formally gazetted and constituted in 1974, the protection and management of Gunung Mulu National Park is fully backed by the National Parks and Nature Reserves Ordinance of 1998 and its subsidiary legislation, the National Parks and Nature Reserves Regulations of 1999. The Ordinance inter alia specifies the type of activities and developments that are allowed inside the boundaries of the national park, the various acts that constitute offences, the penalties applicable, and the process that has to be followed in dealing with such offences. The Regulations specify the prescriptions for carrying out the provisions of the principal Ordinance, for example Part III (C) of the Regulations has a specific section that deals with measures for the protection and management of caves.

Management related infrastructure includes a park headquarters, field stations and a system of trails with access restricted to four “show caves”. Management interventions ensure that there is limited human interference in the natural system and assist in controlling impacts from increased tourism levels. Currently, over 90% of the park and 95% of caves are closed to visitors. The only exception is access to areas for research purposes. Further, there is also reduced access to some sensitive caves. The use of an Integrated Development and Management Plan ensures very strict controls on physical developments in relation to sites, scope, scale, and aesthetic characteristics (of physical projects), so as to avoid “over development”. Development inside the property requires consultation with all relevant stakeholders especially the Special Park Committee which comprises members of local communities and other relevant stakeholders.

Illegal activities remain one of the major challenges in managing the property. Enforcement is carried out in collaboration with other relevant law enforcement agencies such as the Police, Customs, Airport Security, and the Sarawak Biodiversity Centre for protection of park resources. Patrolling of boundaries is incorporated in annual operations plans. Proposed extensions to the property, gazetting of Gunung Buda National Park, and establishment of Labi Forest Reserve on the Brunei side may provide buffers to illegal activities and assist in preventing them from occurring within the property and in the case of additional reserves this will provide wider refuge for wildlife species within the area. Hunting activities within the boundary of the property also remain an ongoing threat. However, this pressure is mainly confined to nomadic Penan communities who have been given permission to hunt non-totally protected species, such as the wild boar, for subsistence consumption only.

Areasof forest surrounding the property have been heavily logged and cut, up to the rivers that demark much of the boundary of the property and this remains an ongoing threat to its integrity and natural values. Extensions to the Park, covering a total area of about 33,000 ha would provide an additional buffer from illegal activities. However, increased erosion and resulting silt loads have potential to significantly alter the aquatic ecology and require monitoring while logging and conversion of forests adjacent to the property to palm oil plantation also require constant and on going attention due to potential impacts.