Total amount granted: USD 100,000 for the project “Risk Management Plan for the Historic Centre of Quito”, implemented from 2016-2018 (UNESCO/Spanish Funds-in-Trust)

On 25 November 2019, the State Party submitted a state of conservation report, available at http://whc.unesco.org/en/list/2/documents/, which includes technical annexes on management and conservation issues, as well as on the monitoring and construction of the first Quito metro line and its station at San Francisco Square, as follows:

The report also includes a description of the damage caused by civil unrest in October 2019 that mainly affected the pavements of streets and public spaces and resulted in graffiti on the buildings’ walls. Immediately after the events, the local and national authorities, and the local population undertook the necessary cleaning and restoration works.

It is recalled that over the past five years, the World Heritage Centre and ICOMOS have intensively accompanied developments in Quito, as is testified by two mission reports since 2013 and six technical reviews since January 2015. The main areas of attention were the preparation of a Management Plan for the historical centre, and the construction of a metro line through the historical centre and of a metro station at San Francisco Square.

The Disaster Risk Management Plan and rental housing strategies are welcome. It is recommended that the Committee encourage the State Party to continue these lines of action and to consider the recommendations of the ICOMOS technical review.

Regarding the location of the metro station at San Francisco Square, no follow-up was given to the recommendation of the World Heritage Committee to further explore alternative locations. Its construction was concluded in December 2017. It is recommended that the Committee also request the State Party to submit the regulations of uses and functions in the buildings and public spaces at San Francisco Square to the World Heritage Centre as soon as they become available.

The construction of the metro tunnel was completed in January 2019. While it should be acknowledged that no incident took place during and after construction, and that the OUV of the property was not affected, it would have been recommendable to systematically implement the monitoring plan and ICOMOS’ recommendations regarding inclinometers that extend to approximately 2 times the depth of excavation to establish fixity, amongst others.

Regarding the incidents that occurred during the civil unrest in 2019, it is noted that the damage was quickly mitigated and repaired in a participatory manner with the local population and the national and local authorities. 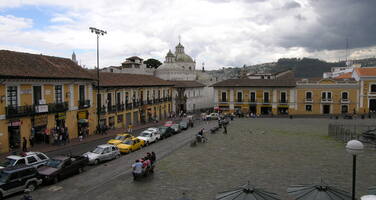