An ICOMOS Advisory mission visited the property in May 2018. The mission report is available online at https://whc.unesco.org/en/list/1103/documents/.

In November 2018, the World Heritage Centre received information concerning an architectural competition announced in Turkestan, which may have impact on the Outstanding Universal Value (OUV) of the property and requested the State Party to provide detailed information and clarification.

On 15 February 2019, following a meeting between the State Party and the World Heritage Centre concerning the Master Plan and major development projects at the property, the World Heritage Centre requested the State Party to submit complete documentation on the projects, possible Heritage Impact Assessments (HIA) and a state of conservation report for review at the present session.

On 29 April 2019, the State Party submitted a state of conservation report on the property, together with HIAs on the planned conservation and restoration works of the historic structures located within the buffer zones and other development initiatives outside the buffer zones. An executive summary of this report is available at https://whc.unesco.org/en/list/1103/documents/. The State Party’s report provides the following information:

Condition of the Mausoleum

Proposed development in the buffer zone and wider setting:

A September 2017 ICOMOS technical review addressed the potential impact of precursors to these projects, as did the 2018 Advisory mission.

The State Party’s report provides a detailed analysis of the state of conservation of the Mausoleum of Khoja Ahmed Yasawi. The replacement of dome tiling and flat roof waterproofing is urgently required, and the sourcing of traditional, locally manufactured tiles is to be supported. Technical details of the proposed new tiling system and waterproofing of roofs should be submitted to the World Heritage Centre, along with detailed progress reports and a final post-implementation report. The proposed conservation work to historic structures in the buffer zone of the property (the Reserve-Museum ‘Azret Sultan’) is also supported, provided that it is undertaken under expert guidance and that its implementation is monitored and documented. A revised Visual Access Protection Zone, based on 12 view axes, greatly reduces the area of height limitation for the property’s setting as defined at the time of inscription.

The 2018 ICOMOS Advisory mission considered such a reduction and concluded that it could potentially lead to negative impacts on the OUV of the property and recommended that it be withdrawn until revisions have been made to the Master Plan to allow for a Visual Access Protection Zone that is evidence-based, resonant with heritage values and has been submitted for review by the Advisory Bodies.

The 10 projects of the Turkestan Spiritual and Cultural Centre project, in an area adjacent to the buffer zone, lie within the Zone of Planning Control as delineated in the Nomination file, but outside the new Zone of Planning Control. Heights provided for the component sites greatly exceed the original height limitations of 7 m. The HIA submitted does not set out sufficient details of the overall project, nor does it assess adequately the impacts (direct, indirect and cumulative) of the proposed development on the attributes of OUV, it is nevertheless clear that, with a height between 12 m and 27.5 m high, the new constructions would dramatically alter the setting of the property and may have a strong adverse impact on the OUV of the property.

It is recommended that the Committee request the State Party to halt the construction of the entire Turkestan Spiritual and Cultural Centre project and to ensure that no demolitions take place until full details have been provided. In this context, the previous recommendations presented by the Round Table concerning the establishment of an Advisory Group for monitoring and coordination of all projects and elaborating a development strategy for the City of Turkestan are valuable steps towards ensuring the adequate preservation of the setting of the Mausoleum and the City of Turkestan. The State Party should also carry out a full assessment of the potential impact of the project on the property and its OUV, and to identify whether and how mitigation measures might be implemented. The new Turkestan Master Plan and the PDP will also need to be revised accordingly.

The Committee may also express concern that governance arrangements for the property are not allowing the timely submission of information for major development initiatives, such as those proposed in the buffer zone and wider setting, to the World Heritage Centre for review by the Advisory Bodies before decisions are taken that would be difficult to reverse, as per Paragraph 172 of the Operational Guidelines. It should be noted that the September 2017 ICOMOS Technical Review and the 2018 mission both made clear recommendations that such reviews are needed before the projects commence.

It is suggested that the Management Plan for the property needs to be amended to include policies for the proper processing of development proposals, following the requirements of the Operational Guidelines. Opportunities also need to be taken to strengthen understanding of the due processes, particularly in line with the 2011 UNESCO Recommendation on the Historic Urban Landscape (HUL), and of the inter-linkages between the property, its buffer zone and its wider setting in relation to development projects.

In view of the potential negative impacts of the Turkestan Spiritual and Cultural Centre project, the Committee may wish to request the State Party to invite, as a matter of urgency, a joint World Heritage Centre/ICOMOS Reactive Monitoring mission to undertake an assessment of all the proposed projects, the new Master Plan and the revised Zone of Planning Control, and to make recommendations on how development projects might support rather than endanger the property and its OUV. This mission should also assess whether the property faces any potential or ascertained danger, in line with Paragraph 179 of the Operational Guidelines. 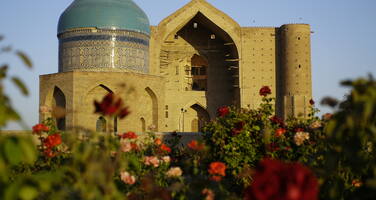