On 22 March 2018, the State Party provided additional information consisting of the updated Management Plan (2017-2020) for the property, and its approval note by the National Museum of Costa Rica (MNCR) from March 2018.

The State Party reports the following:

The State Party should be commended for its progress made in the implementation of a number of the Committee’s recommendations, and particularly for the promotion of diverse educational and cultural activities and projects related to the property. Further efforts to finalize cooperation agreements with local communities and to develop educational initiatives that highlight the property as a reference for cultural heritage potential in Costa Rica, should be encouraged.

However, delays are noted in the implementation of actions that are essential for the proper management and conservation of the property, particularly the preparation of the Osa Canton Regulatory Plan, the Risk Preparedness and Disaster Management Plans, and management arrangements with the local and indigenous communities. It is recommended that the Committee request the State Party to submit a work plan and timetable for the further implementation of these and other recommended activities, along with the commitment to increase the human and financial resources required for ensuring their implementation and the broader conservation and management objectives for the property.

It is noted with concern that certain key threats to the conservation of the Outstanding Universal Value (OUV) of the property, including its authenticity and integrity, have not been resolved. The HIA of the international airport immediately adjacent to Finca 6 has not been finalized, although it may be expected that the airport, with its runway and auxiliary structures, would have a major impact on the property as a whole and in particular the Finca 6 component.

In March 2018, ICOMOS submitted a Technical Review to the State Party of the HIA for the El Diquís Hydroelectric Plant project. Further technical details were subsequently provided by the State Party, including visualisations, and the review was augmented accordingly, noting the following:

It should be noted that the Management Plan 2017-2020 highlights the “excellent view of the delta and its surroundings” from the Batambal site, and the need to “better understand the delta’s dynamics of occupation [and to] reinforce the values and significance of the asset”, while one of its objectives includes the assessment of the “eventual expansion” of the declared sites’ buffer zones. The narrow focus of the HIA appears to be at odds with the aims and objectives of the Management Plan.

It is suggested that the Committee express its concern at the potential negative impact of the proposed hydroelectric dam project on the landscape context of the chiefdom settlements, and thus on the OUV of the property. 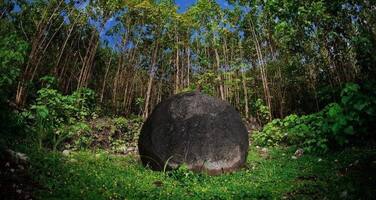