New information:
A monitoring mission to Isfahan and Tchoga Zanbil was undertaken by an ICCROM / ICOMOS expert at the invitation of the Government of Iran and with support from the World Heritage Fund in December 1999. A brief report will be presented by the expert, who will be a member of the ICOMOS delegation to the twenty-fourth session of the Bureau.

The Bureau may wish to examine the findings of the mission and take a decision thereafter.

A monitoring mission was undertaken by an ICCROM/ICOMOS expert in December 1999 at the invitation of the Government of Iran. The Bureau recalled that the site was located in the war zone during the 1980s and suffered from the impact of bombardments.

In 1995, a UNESCO mission recommended that a Master Plan of the area be prepared, taking into account the need to enhance site presentation, visitor management, basic infrastructure, and development control in the surrounding settlement areas. The 1995 mission also recommended that legal protection for the site and its buffer zone be established. The Bureau recalled that the 1995 UNESCO reactive monitoring mission, undertaken following the heavy rainfall resulting in damage to the ziggurat, recommended further protective measures to consolidate the ziggurat and improve drainage of the mud-brick structure.

The expert informed the Bureau that current management and conservation activities on-site have dramatically improved since the previous UNESCO missions, largely due to the progress made in the implementation of Phase I of a UNESCO-Japan Funds-In-Trust Project, which began after a Technical Co-operation Agreement was signed in April 1999. The results, so far highly commendable, have been obtained through the joint efforts of the national authorities concerned, a scientific advisory group, and expert consultants who collaborate together in five project teams addressing issues related to (a) management, (b) archaeology, (c) architecture, (d) conservation, and (e) geology. A Master Plan, that is expected to be updated on a regular basis, is being prepared for the presentation of the site. The Bureau was informed that training at national and regional levels was being emphasised, particularly focusing on capacity building in the field of conservation sciences and conservation of mud-brick structures.

The Observer of Iran expressed his Government's appreciation to UNESCO and the Government of Japan for extending their co-operation and support for both the conservation and training activities being undertaken on-site by the Iranian authorities.

The Bureau examined the state of conservation of Tchogha Zanbil presented by the international expert who undertook a mission to the site in December 1999 in close co-operation with the Government of Iran. The Bureau, taking note of the progress made in the implementation of the recommendations of the 1995 UNESCO mission, congratulated the Government of Iran on its efforts to develop a management plan to enhance the presentation and management of the site. The Bureau noted with appreciation, the technical collaboration between the national authorities and international experts mobilized under the UNESCO Japan Funds-in-Trust Agreement signed in April 1999.

In view of the importance of the activities being carried out under this Agreement, especially in relation to the conservation of mud-brick architecture, these activities could serve as an important case study for managing and conserving similar sites in States Parties of the region.  The Bureau requested the Government of Iran, in close co-operation with the Secretariat, to submit a report on further progress made in Tchogha Zanbil under the UNESCO Japan Funds-in-Trust Project, for examination by the Bureau at its twenty-fifth session in 2001. 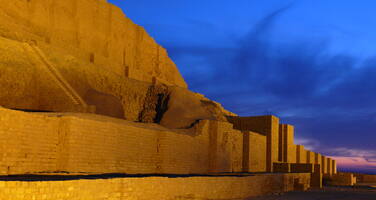