The media reports and further information received by IUCN provide the following information:

On 5 February 2014, IUCN was contacted by a consultancy firm tasked by the Government of Nepal to develop a detailed design of the railway alignment and undertake an environmental impact assessment, requesting further guidance on the application of IUCN’s World Heritage Advice Note on Environmental Assessment. IUCN replied on 7 February 2014, noting its readiness to provide technical support to the State Party.

On 28 April 2014, the World Heritage Centre received a reply from the State Party confirming the financial support of the Government of India for the road and bridge construction. The State Party also confirmed that the road and railways cross the property, and while the construction of one bridge in the buffer zone has been halted by the Department of National Parks and Wildlife Conservation, another bridge is planned for further north. The Department of Railways is now undertaking a Detailed Project Report and Environmental Impact Assessment for the railroad where it crosses the property, including consideration of alternative routes.

There is concern about the reported plans for the construction of the East-West Electric Railway and the Tarai Hulaki Highway through the property. These projects, if implemented as planned through the property, would represent a clear potential danger to its Outstanding Universal Value (OUV) in accordance with Paragraph 180 of the Operational Guidelines, including through habitat fragmentation, wildlife disturbance including restricted movement and potentially reduced breeding, and an increased risk of poaching, illegal logging, and encroachment, among other illegal activities. This is of particular concern in light of the global importance of the property’s populations of Tiger and Greater One-horned Rhinoceros, and the conservation successes achieved at the property as exemplified by two recent years of zero poaching of rhino (2011 and 2013) and the strong community support for the conservation of the property recently reported in the media.

It should be noted that an Environmental Impact Assessment (EIA) of the railway is being undertaken, and the request for further guidance on the application of IUCN’s World Heritage Advice Note on Environmental Assessment is welcomed. However, it is not clear whether an EIA has been undertaken for the highway, and the reports of construction of bridges in the buffer zone is a significant concern. It should be recalled that between 2001 and 2004, the Committee noted concern about the construction of the Kasara Bridge across the Rapti River that constitutes the northern boundary of the property, and about the fact that construction of this project had been undertaken without an EIA. The Committee, in Decision 28 COM 15B.11, also recommended “that the World Heritage Centre and IUCN continue to communicate with all concerned donors to fully understand how an infrastructure project impacting World Heritage could have been financed without an EIA and how the recurrence of such practice could be prevented in Nepal and elsewhere in the future”. It is therefore recommended that the Committee request the State Party to urgently complete all environmental assessments required for these projects, including an assessment of alternative alignments that do not cross the property, before investing in the construction of infrastructure that could preclude the viability of any such alternative alignments. 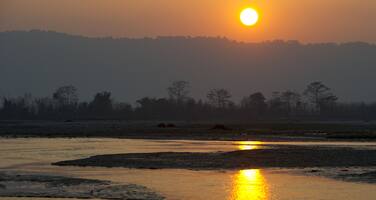