To date 7 million dollars have been collected thanks to governmental and private donations.

Inscribed in 1980 on the World Heritage List under criteria (ii) and (iii), the site is the subject of an international safeguarding campaign.

It was described as "one of the greatest metropolises of the most ancient East". To date, approximately 800,000 sq. m have been exposed, estimated to be about 10% of the total site. At the time of excavation, the standing brick walls were found to be relatively well-preserved. Soon afterwards, however, development of white salt efflorescence was observed on the walls. The brick has been rapidly deteriorating because of salt crystallization and hydration, which has resulted in exfoliation and disintegration of the brick. Most of this salt damage has been attributed to the destructive effects of sodium sulphates. A serious threat to Moenjodaro was posed by the river Indus. The bed of the river has shifted considerably over the years and has clearly flooded Moenjodaro in the past. Of late it has shown a tendency to move westward towards the remains.

A master plan, developed with the assistance of UNESCO, provided for the following work:

(1) the lowering of the ground water level;

(2) the armouring of the existing bunds facing the river so as to pin down the extreme limit of the current at an optimum safe distance from the existing right bank of the river;

(3) a number of steps to be taken for the preservation of archaeological remains;

(4) landscaping of the site and planting of salt resistant trees and grass to reduce the drifting of salt and its carriage by wind.

Since it was apparent that the cost of the work could not be borne by Pakistan alone, an international campaign was launched by UNESCO in 1979 to mobilize international support. To date 7 million dollars have been collected thanks to governmental and private donations. In addition to this, the government estimates that it has spent 9.5 million dollars and that an additional amount of approximately 7 million (based on 1988 costs) will berequired to complete the campaign.

Since the launching of the campaign, a significant part of the major infrastructural elements foreseen by the master plan has been accomplished, particularly with regard to the protection of the site from flooding and the lowering of the ground water level. Over the next years, it will be necessary to complete further work required with regard to these two aspects, so that further effort can be concentrated on the preservation of archaeological remains. Presentation of the archaeological remains to visitors must be a prominent theme in the plans for the site, including steps to be taken to prevent damage to the site by the visitors. An overall plan for the site must therefore be developed having particular regard for the relationship between the preservation and exploitation of Moenjodaro as an archaeological site and its development as a cultural tourism facility. 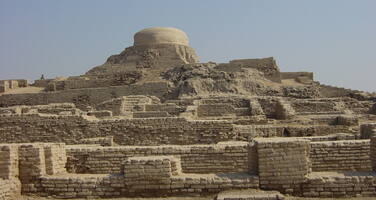