State of Conservation Monastery of the ... 1990
Print


These properties were included in 1983 in the World Heritage List under criteria (iii) and (vi) for the whole of the Monastery of the Hieronymites and the Tower of Belem, and under criteria (i) and (ii) for the Monastery of Batalha. At the request of the Portuguese authorities, an expert mission was carried out on the three buildings in May 1990, financed by the World Heritage Fund (US $5,900). The purpose of the mission was to make a diagnosis of their state of deterioration, resulting in particular from heavy storms, and to provide the competent authorities with advice for their restoration and conservation. The report can be consulted in the Secretariat.

Although these monuments differ from one another in respect of their cultural identity, analysis of the pathological problems observed revealed that the main causes could be attributed to the following common factors: humidity, the poor quality of the stone and weaknesses in the resistance offered by the bearing walls. The damage due to the humidity derives from a variety of causes: upwellings of water through capillary action, defective waterproofing and rainwater dripping on the facades. The deterioration to the stonework is the result of the use of rocks whose microstructure is unsuitable for them to bear being exposed to excessively harsh weather conditions for a period of years or indeed of centuries. The bearing walls which are in freestone are cracked or broken because of insufficient mechanical resistance. To repair and prevent a worsening of this damage various techniques can be envisaged. However, in view of the many factors involved, in some cases a precise diagnosis can be arrived at only on the basis of specific experimental measures. Furthermore, the state and quality of these works of art are such as to make it necessary for the Portuguese authorities to be informed of the recent techniques available for diagnosis and restoration. The organization of specialized training courses, specifically adapted to the practical problems affecting the monuments, would be useful for their conservation.

More specifically, at the Monastery of the Hieronymites, the main problems for the conservation of the buildings are as follows: stability of the structures; water seepage; maintenance of stonework, timber work and roofing. The many dilapidations apparent, in the form of cracks, breaches, separations and canting, give cause for fearing more substantial damage if consolidation work is not undertaken. But a precise diagnosis cannot be arrived at on the basis of visual observations. A series of experimental measures should be taken in order to have a scientific base for determining future lines of action. Furthermore, the water seepage points to inadequate waterproofing of the roofing and of the jointing of the walls. Dampness contributes to the weathering of stone. Before carrying out a programme of waterproofing operations, it is essential for the weak points to be located where water is likely to penetrate. The establishment of a team responsible for continual maintenance and monitoring further deficiencies would prevent certain types of deterioration from growing worse.

The various problems affecting the stonework of the Tower of Belem may be set in two categories: damage to the stone and mortar exposed on the outside to the elements and deterioration of the surface of the stone inside the building. From the point of view of its stability, the Tower of Belem is very sound. The visible dilapidations can be remedied quite easily. The most important measure to ensure good conservation is to make up for the lack of ventilation and airing in the cannon room. Water seepage due to defective jointing may also cause damage which will grow worse with time. Cleaning of the black parts and fungicidal treatment would enhance the external appearance of the building.

At the Monastery of Batalha the problems encountered are of several different kinds. In order of importance, the following have been noted: impairment of the stability of the building due to mechanical action; deterioration of the stone in its ornamental function, connected with physico-chemical and biological changes revealed by the crumbling of the stone and the colouring of the facades; and the problems of the stained-glass windows, the most important ones in Portugal, dating from the fifteenth century. Several factors are endangering the perfect conservation of these stained-glass windows. The stone mullions, which existed in the bays and on which the windows were fixed, have suffered damage. In particular, at the time of the earthquake in 1755, the stained-glass windows were subjected to considerable tension under the effect of the torsion experienced by the church. Since then, certain provisional restoration measures have consisted in inserting the windows into wooden frames. But no valid conservation measure has been taken to solve the problem of the distortion of the lead work and the broken panes. The desirable short-term measures are set out in the technical report. At the Monastery of Batalha the main problem concerns the preservation of the building's stability. Before practical consolidation measures can be proposed, a thorough study must be made of the causes of the deteriorations regarding which precise knowledge is -lacking at, present.

The mission initially requested to examine the three aforementioned properties nevertheless provided the expert with an opportunity to visit other Portuguese sites included in the World Heritage List, namely the Convent of Christ in Tomar and the Monastery of Alcobaca.

The Convent of Christ in Tomar mainly shows deterioration resulting from dampness, giving rise in particular to the colouring of the facades due to water dripping from the roofs. The continued presence of surface humidity leads in addition to a proliferation of moss and lichen. The question that most urgently needs to be settled concerns the humidity in the Rotunda of the Templars. On this depends the conservation of the sixteenth-century gilt and polychrome paintings. The main problem in the Monastery of Alcobaca

is due to the presence of groundwater beneath the building. The resulting upwellings of water through capillary action are causing damage to the stone in many places. Borings and a study of the groundwater level would allow the best possible solutions to be proposed with a view to remedying this phenomenon. Deterioration of the ornamental parts in stone was noted, resulting from the poor quality of the stone used. In particular, this stone has proved to be unsuitable for use in the foundation mass. Before deciding on the most appropriate consolidation operations for the stonework, it is essential to monitor changes in the width of the existing cracks. 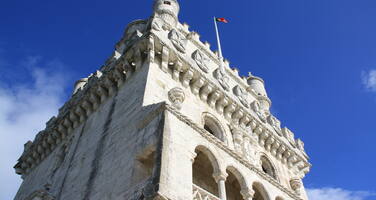