The World Heritage Centre received a State of Conservation report from the State Party on 31 January 2005, indicating that a prohibition for the use of reinforced concrete and regulations for the use of earthen constructions would depend on the results of an inventory of materials and architectural typologies according to each quarter of the protected area of the city.  This inventory was scheduled for completion around mid-2005.

The World Heritage Centre also received a Draft Master Plan for the City of Cuzco.  The plan is divided into three main sections: the Historic City, an Action Plan for Revitalization, and the protection of the Historic Centre.  The first part contains a historical overview of the city from its origins to the present.  The second part involves socio-cultural aspects, demography, cultural heritage, Inca archaeology, urbanism, land use, transport, environment, tourism and legal protection.  The third part describes objectives, methodology and general actions concerning the Master Plan.  ICOMOS commented that from a conceptual point of view the Draft Master Plan was very well conceived, complete and could be used as a model for other urban sites.  However, this Master Plan has not yet been institutionalized.

One of the actions presented in the Plan, but not yet implemented, relates to the Historic Buildings of Cuzco and proposes, among other initiatives, the establishment of a catalogue, a computerized cadastral map, the improvement of administrative procedures and the modification of Law No.  27157 concerning constructions in the Historic Centre.

The State Party also submitted a Master Plan for the Archaeological Park of Saqsaywaman, divided into two parts.  The first part is a description of methodologies, general aspects, historical background and problems.  The second part contains proposals for territorial division of protected areas and the implementation of a contingency plan.

The World Heritage Centre was informed of the interest of the State Party to include the Archaeological Park of Saqsawaman as an extension to the protected area of the City of Cuzco and its buffer zone.  Including the Archaeological Park of Saqsaywaman, the historic area would increase to a total of 3,353 ha.  The National Institute for Culture (INC) designated a special commission with a Directorial Resolution No.  300/INC-C on 3 December 2004 to elaborate this proposal.  The World Heritage Centre has informed the Peruvian authorities that a new nomination file for the extension of the inscription of the City of Cuzco, including the Archeological Park of Saqsaywaman, would need to be submitted.

ICOMOS commented that the proposal for the extension was well prepared and presented, and that it was based on the recommendations made by ICOMOS in 1983 when the property was inscribed on the World Heritage List.  The Management Plan for the archaeological property of Saqsaywama is complete and, contrary to the Master plan for the historic city of Cuzco, the cost estimates for the projects foreseen in 2005-2006 are clearly stated.

3. Takes note of the information provided and congratulates the State Party of Peru on the efforts made in the elaboration of the draft Master Plan for the City of Cuzco and the management plan for the archaeological site of Saqsaywama,

4. Urges the State Party to finalize the procedure for, and start implementation of the Master Plan for the City of Cuzco;

5. Requests the State Party to keep the Committee informed on the progress in the adoption and implementation of the Master Plan.

3.  Taking note of the information provided and congratulating the States Party on the efforts made in the elaboration of the Draft Master Plan for the City of Cuzco and the Management Plan for the archaeological property of Saqsaywama,

4.  Urges the States Party to finalize the procedure for, and start implementation of the Master Plan for the World Heritage City of Cuzco;

5.  Requests the States Party to keep the World Heritage Committee informed on the progress in the adoption and implementation of the Master Plan. 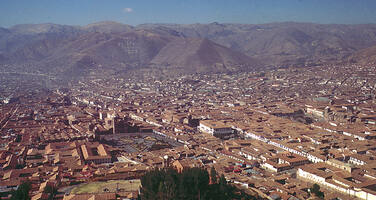