Impact of tourism, especially climbing expeditions; Anti-personnel mines infestation in the park; Staffing and budgetary deficiencies; Degradation of lands around the park.

As requested by the Committee, the State Party submitted a report through its Permanent Delegation in February 2005.  The report stated that for the first time, since the park has been gazetted in 1941, a ten year General Management Plan has been developed and adopted by the Board of Trustees of Uganda Wildlife Authority (UWA) on 29 June 2004.  The implementation of the plan started 1 July 2004.  To ensure proper and systematic implementation of planned activities and the judicious allocation of human and other resources, a business plan, based on the General Management Plan is being developed with assistance from the World Conservation Society.

It should be noted that all relevant staff is in place, field operations are facilitated by new means of transport.  The building of new headquarters close to the park and main tourist entrance is being planned.  The survey and marking of boundaries, is reported to continue, involving both neighboring communities, relevant government officials and other agencies.  The Committee was informed at its 28th session (Suzhou, 2004) that 30% of the open boundary had been demarcated, this year the survey is about to be completed.  Concrete pillars are being constructed along the border, which was foreseen to be completed in December 2004.  The World Heritage Centre has not yet received a map indicating the precise surveyed and marked boundary of the property.

The Uganda Peoples Defense Force (UPDF) is removing mines from the Park.  The security situation remained good since 2001, although a few areas of strategic security concern are manned by the UPDF itself.  The World Heritage Centre notes that at the time of the IUCN/UNESCO mission in 2003, no security forces were occupying any part of the property.

The World Heritage Centre notes that the report does not mention the implementation of an announced monitoring and research plan to monitor illegal activities and extraction of natural resources such as poaching and logging as well as impacts of tourism, fires and human – wildlife conflicts.  Also no mention is made of the work of the Community Protected Area Institution (CPI), a local community committee which works with UWA to address issues that affect the community/Park relations, established on the recommendation of the 2003 IUCN/UNESCO mission.

The progress being made in relation to the Management Plan, tourism infrastructure and management, boundary demarcation and the removal of mines is noted.  The IUCN World Commission on Protected Areas has considerable expertise in tourism in protected areas and would be available for consultation on best practice for such issues.  IUCN also noted the collaborative work of Ugandan Wildlife Authority, WWF EARPO (Eastern African Regional Program Office) and WWF Norway, and encouraged the involved parties to report on the outcomes of the project in due course so that others may learn from the experiences.

3. Thanks the State Party of Niger for its decision to forego the construction of a dam and mining activities in the W National Park;

4. Encourages Niger, Burkina Faso and Benin to finalise the proposal to extend the W Park into a transboundary property between the three countries.

3.  Notes with thanks the report submitted by the State Party;

4.  Reiterates its request to the State Party  to submit to the World Heritage Centre the General Management Plan and a map of the property showing the precise surveyed and marked boundary;

5.  Commends Uganda Wildlife Authority (UWA), one year after the removal of the property of the List of World Heritage in Danger, for ongoing work to improve management and conservation of the property, notably through the implementation of a ten year Management Plan, as well as considerable efforts to support the sustainable development of appropriate tourism in the Park;

6.  Requests the State Party to submit a report on the state of conservation by 1 February 2006 for examination by the World Heritage Committee at its 30th session. 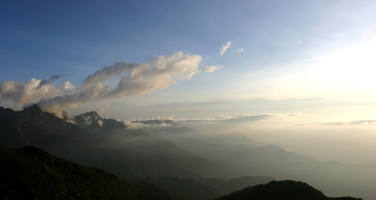