The prehistoric cemeteries at Gochang, Hwasun, and Ganghwa contain many hundreds of examples of dolmens - tombs from the 1st millennium BC constructed of large stone slabs. They form part of the Megalithic culture, found in many parts of the world, but nowhere in such a concentrated form. 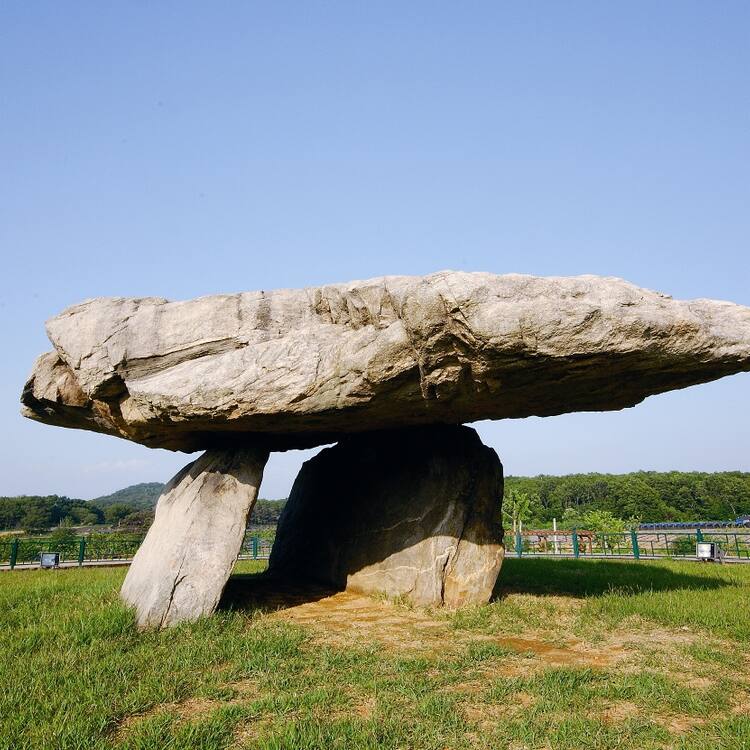 The Gochang, Hwasun and Ganghwa Dolmen sites contain the highest density and greatest variety of dolmens in Korea, and indeed of any country. Dolmens are megalithic funerary monuments, which figured prominently in Neolithic and Bronze Age cultures across the world during the 2nd and 1st millennia BCE. Usually consisting of two or more undressed stone slabs supporting a huge capstone, it is generally accepted that they were simply burial chambers, erected over the bodies or bones of deceased worthies. They are usually found in cemeteries on elevated sites and are of great archaeological value for the information that they provide about the prehistoric people who built them and their social and political systems, beliefs and rituals, and arts and ceremonies.

Criterion (iii): The global prehistoric technological and social phenomenon that resulted in the appearance in the 2nd and 3rd millennia BCE of funerary and ritual monuments constructed of large stones (the "Megalithic Culture") is nowhere more vividly illustrated than in the dolmen cemeteries of Gochang, Hwasun, and Ganghwa.

A significant number of dolmens are distributed in each of the three areas, fully showing the development history of the megalithic culture with numerous examples of various style and type. The existence of a quarry near the site is especially important in providing references to the origins, nature and developmental history of the dolmens, as well as contributing to the integrity of the property. These components are all included within the boundaries of the inscribed property.

The re-erection of selected collapsed or dispersed dolmens is planned. This work will be based on meticulous scientific research, in order to establish the original configuration and location of the dolmens.

The greatest risk to the dolmens is fire and damage to the surrounding environment.

The dolmens possess authenticity of form, materials and location. Most of the dolmens have remained untouched since the time of their construction, their present condition being the result of normal processes of decay. Although a few have been dismantled by farmers their stones have survived intact and their original location and form can be identified without difficulty.

The properties belong to the Government of the Republic of Korea. Overall responsibility for protection, funding and the preparation and implementation of conservation policies for the sites and buffer zones rests with the Cultural Heritage Administration (CHA). The National Research Institute of Cultural Heritage carries out academic research, field survey and excavation (in association with university museums and private heritage research institutes).

Day-to-day preservation and management is the responsibility of the relevant local administrations (Gochang-gun County, Hwasun-gun County and Ganghwa-gun County). The Gochang Dolmen Museum, Hwasun Dolmen Site Protection Pavilion and Ganghwa Historic Museum provide information about each dolmen site to visitors. Regular day-to-day monitoring is carried out and in-depth professional monitoring is carried out on a 3-to-4 year basis.

Management plans have been developed for each of the three properties within the inscribed site. Their primary objective is the preservation of the original character of the dolmen sites and their immediate environments. The plans cover scientific research (survey, inventory, selected excavation and paleo-environmental studies), protection of the environment (selective clearance of vegetation cover, routing of visitors to ensure minimal impact on the natural environment, acquisition of adjacent farmland to prevent incursions, etc.), systematic monitoring and presentation (signage, access roads and parking, interpretation facilities, public awareness and participation of local communities, festivals and other onsite events).

To prevent forest fire, scrubs near the dolmens are removed regularly and dolmens that have collapsed as a result of unearthed land or tree roots are investigated, extensively researched and restored to their original state.