Founded as a Greek colony in the 6th century B.C., Agrigento became one of the leading cities in the Mediterranean world. Its supremacy and pride are demonstrated by the remains of the magnificent Doric temples that dominate the ancient town, much of which still lies intact under today's fields and orchards. Selected excavated areas throw light on the later Hellenistic and Roman town and the burial practices of its early Christian inhabitants. 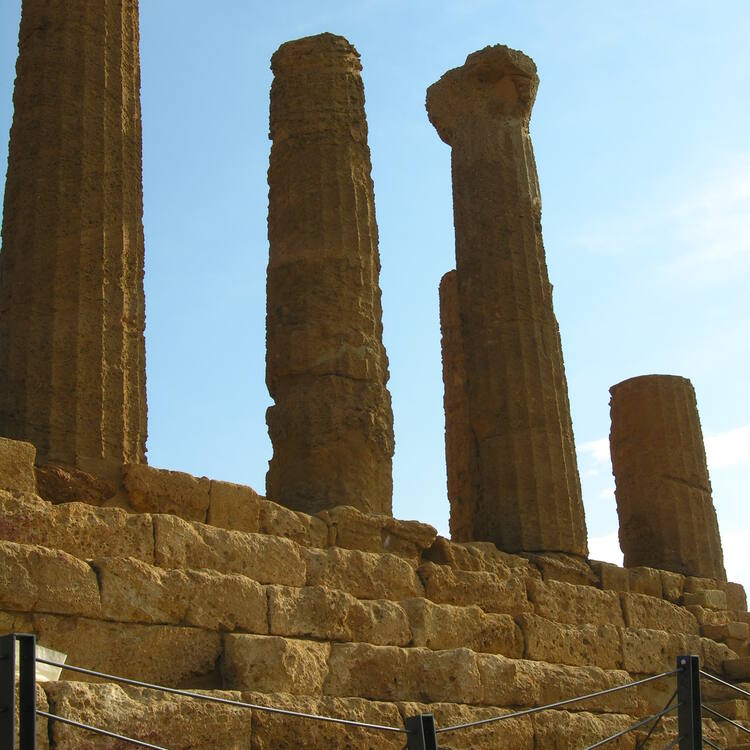 The archaeological area of Agrigento, the Valley of the Temples, is on the southern coast of Sicily and covers the vast territory of the ancient polis, from the Rupe Atenea to the acropolis of the original ancient city, as well as to the sacred hill on which stand the main Doric temples and up to the extramural necropolis.

Founded as a Greek colony in the 6th century BCE, Agrigento became one of the leading cities in the Mediterranean region. Its supremacy and pride are demonstrated by the remains of the magnificent Doric temples that dominate the ancient town, much of which still lies intact under today's fields and orchards. Selected excavated areas reveal the late Hellenistic and Roman town and the burial practices of its early Christian inhabitants.

Agrigento has a special place among classical sites in the history of the ancient world because of the way in which its original site, typical of Greek colonial settlements, has been preserved, as well as the substantial remains of a group of buildings from an early period that were not overlain by later structures or converted to suit later tastes and cults.

Criterion (i): The great row of Doric temples is one of the most outstanding monuments of Greek art and culture.

Criterion (ii): The archaeological area of Agrigento exhibits an important interchange of human values, being undoubtedly one of the leading cities in the Mediterranean region with its outstanding evidence of Greek influence.

Criterion (iii): As one of the greatest cities of the ancient Mediterranean region, Agrigento is an extraordinary testament of Greek civilization in its exceptionally preserved condition.

Criterion (iv): The temples in the area exemplify Greek architecture and are considered to be among the most extraordinary representations of Doric architecture in the world.

The archaeological area of Agrigento includes all the essential elements that contribute to the justification of its Outstanding Universal Value. The site boundary includes the entire territory of the ancient polis, including the extramural area of the necropolis, the substantial excavated areas of the residential area of Hellenistic and Roman Agrigento, the complex network of underground aqueducts and a wide portion of land where there are still unexcavated archaeological structures. The archaeological structures have been preserved in good condition, thus ensuring an authentic representation. However, land instability remains an issue.

The site is protected by the national law for protection of cultural heritage, Decreto Legislativo 42/2004, Codice dei beni culturali e del paesaggio, and is subject to a safeguarding measure which ensures any activity must be authorized by the relevant Soprintendenza.

The Valley of the Temples of Agrigento was declared a Zone of National Interest under the Law of 28 September 1966. Decrees issued by the Ministries of Public Works (6 May 1968) and National Education (7 October 1971) defined the boundary and constraints on use of the site. The boundary was further confirmed legally by the President of the Sicilian Region in Decree No 91 (13 June 1991). This group of statutory instruments imposes an absolute ban on any form of construction within the prescribed area.

The regional Law n.20/2000 has founded the Archaeological and Landscape Park of the Valley of the Temples of Agrigento which aims not only to protect the landscape and historical heritage of the site, but also to improve and promote it. The park enjoys financial administrative autonomy. Therefore the Council of the Park can plan and carry out any intervention of preservation and improvement of the site.

The Council has adopted the Park Plan. This will create and organize visitor itineraries with the objective to extend the length of visits and benefit the local economy. The Park Plan aims to demonstrate the ancient urban organization to tourists, with its system of streets and roads (in part still to be excavated). Some street lines and entrances to the city have stayed in use since medieval times. The Park Plan provides various types of protection of monuments and archaeological sites that are tailored as necessary and allow for greater access by tourists. Expanding such security allows for the creation of new thematic routes and points of interest, more parking, easier accessibility and movement within the park, as well as alternative means of transportation such as a railway and electric buses. Flanked by pedestrian paths and equestrian trails (green ways), green corridors and patches of natural vegetation will be constructed to improve functional relationships between the coast and recreational landscapes as well as between agricultural land and cities.

Traditional methods of production regarding agriculture and the production of artefacts of value will be preserved, in particular for cultural diversity, farming techniques, arboriculture, and Mediterranean gardening. This provides support for the return of biological farming methods. The Park Plan provides active conservation and development of the housing stock, which has dropped in value and is under-used or otherwise available. This is relevant to the Park for the creation of services and cultural facilities, exhibition and educational-informational as well as non-hotel accommodation. An Action Plan for ecotourism has been prepared that includes nature and art in a complete “sea-river-mountain” tour, which opens the Valley of the Temples to new categories of users and expands the tourist season.