Aquileia (in Friuli-Venezia Giulia), one of the largest and wealthiest cities of the Early Roman Empire, was destroyed by Attila in the mid-5th century. Most of it still lies unexcavated beneath the fields, and as such it constitutes the greatest archaeological reserve of its kind. The patriarchal basilica, an outstanding building with an exceptional mosaic pavement, played a key role in the evangelization of a large region of central Europe. 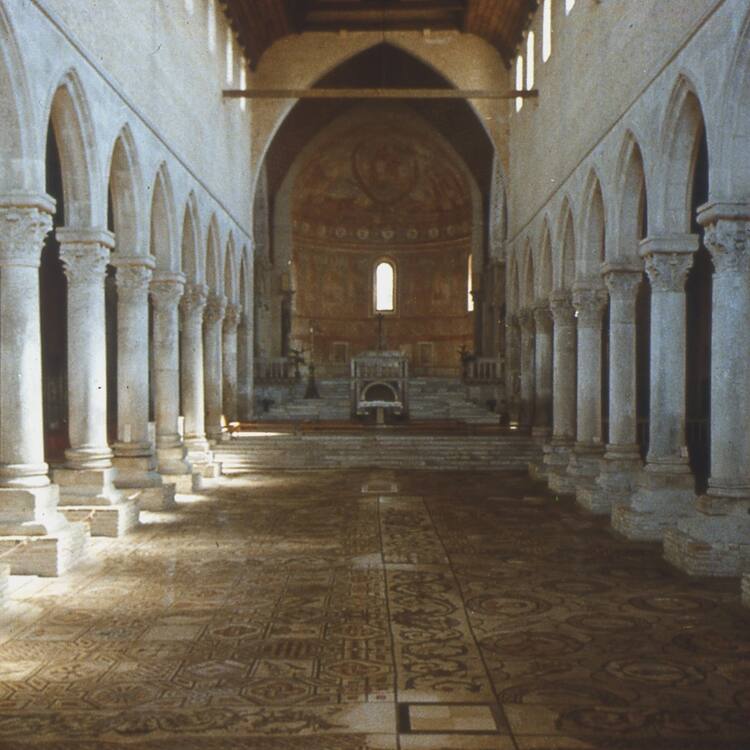 Located at the northern end of the Adriatic Sea on the Natissa (Natiso) River, the property includes the Archaeological Area and the Patriarchal Basilica of Aquileia. The Roman city dates to 181 BCE and became one of the largest and wealthiest cities in the early Roman Empire until it was sacked and destroyed in 452 by the Huns led by Attila.

The city was a major trading centre connecting the Mediterranean to Central Europe. Aquileia’s wealth and status within the empire was reflected in its magnificent public buildings and private residences many of which survive as archaeological remains. The archaeological area, covering 155 hectares, includes part of the forum and its Roman basilica (courthouse), the late antique horrea, one of the sets of baths, and two luxurious residential complexes. Outside the late Roman city walls, the entire course of which has been located and part of which stills survives, excavations have also revealed a cemetery with some impressive funerary monuments. Below ground archaeological remains of the amphitheatre and the circus have also been preserved.

The most striking remains of the Roman city are those of the port installations, a long row of warehouses and quays that stretch along the bank of the river. These were incorporated into the 4th century defences, substantial traces of which can be seen today.

The dominant feature of Aquileia is the Basilica, erected, primarily, in the early-Christian period. The imposing mosaic floor dates back to the Theodorian church built at the beginning of the IV century and rebuilt between the 11th and 14th century according to the Romanesque and Gothic style.

Most of Aquileia remains unexcavated beneath fields and, as a result, constitutes a unique archaeological reserve. Its Patriarchal Basilica is an outstanding building that houses an exceptional work of art in its mosaic pavement and also played a key role in the evangelization of a large region of central Europe. It became the seat of a Patriarchate which survived until 1751.

Criterion (iii): Aquileia was one of the largest and most wealthy cities of the Early Roman Empire.

Criterion (iv): By virtue of the fact that most of ancient Aquileia survives intact and unexcavated, it is the most complete example of an Early Roman city in the Mediterranean world.

Criterion (vi): The Patriarchal Basilican Complex in Aquileia played a decisive role in the spread of Christianity into central Europe in the early Middle Ages.

The World Heritage property includes all the elements contributing to justify its Outstanding Universal Value, encompassing the Patriarchal complex of the Basilica and the whole extension of the Roman city. Most of the archaeological area remains intact as it is located beneath the small contemporary town and large areas of agricultural land. It is, therefore, probably the largest unexcavated Roman city in the whole Mediterranean world, and as such its potential for research is enormous.

Threats identified for the property relate primarily to water damage caused by flooding and water table level. In addition, the impact of traffic on the highway main street passing through the property was identified at the time of inscription.

Archaeological work began in Aquileia in the late 19th century and has continued, since that time, hand in hand with conservation and minimal reconstruction work, associated with meticulous archaeological and art-historical research. Some of the restoration work carried out on excavated archaeological areas in the decades immediately preceding and following World War II, however, would not be considered acceptable by current standards. This work involved the reconstruction of colonnades using bricks to fill missing portions of columns and importing stone slabs for paving, work that exceeds current limits of acceptable anastylosis. A more rigorous policy is now in operation, involving minimal intervention.

As a result, the authenticity of the property is high. For example, most of the original city of Aquileia remains buried and unexcavated beneath the modern small town and agricultural land, the layout and form of the Roman city survives intact. The area continues to function as a small urban centre although Aquileia’s role as a major trading centre was replaced by Venice many centuries ago.

The Patriarchal Basilica has retained its religious function. The present building, with its cruciform layout, dates from the 9th century although its foundations are from the Roman period. Its original Romanesque style has largely survived impacted only by Gothic features that reflect a reconstruction programme following a mid-14th century earthquake.

The entire area inscribed on the World Heritage List is protected under the Legislative Decree 42/2004, Code of Cultural Heritage and Landscape a safeguarding measure which ensures that any activity on the site must be authorized by the relevant Superintendence (peripheral office of the Ministry for Cultural Heritage and Activities).

Ownership is shared between the Italian State (excavated areas, museums), the Roman Catholic Church (the Basilica complex), the Municipality of Aquileia, and private individuals.

The urban planning (called Piano Regolatore Generale-PRG) refers specifically to the cultural importance of the property and reinforces the limitations provided by the legislative protection.

Overall responsibility for supervision of the protection by legislation rests with the peripheral offices of the Ministry for Cultural Heritage and Activities, based in Trieste, which manages the archaeological sites and museums. A comprehensive plan for the management of the properties has been prepared and this provides for regular conservation projects and also special research and restoration activities. The Church authorities manage the Basilican complex and have a detailed programme of conservation and restoration activities. The municipality actively controls all activities within its competence. It is worthy of comment that it is very supportive of all activities designed to extend the protection and presentation of its heritage.

Since 2008, beside municipality and the Superintendence, the Fondazione Aquileia has been involved in the management of the property The Fondazione is a juridical body established jointly by the Ministry, Region Friuli Venezia Giulia, Municipality of Aquiliea, and Province of Udine with a principal mission focused on strategic planning for cultural development and general suggestions for territorial activities relating to the management of the property. Fondazione Aquileia manages some areas assigned by the Ministry, for valorization, conservation, and restoration.

play_arrow Archaeological Area and the Patriarchal Basilica of ... (UNESCO/NHK)