The late 17th-century core of this historic town, founded by the French and occupied by the Dutch before coming under Portuguese rule, has preserved the original rectangular street plan in its entirety. Thanks to a period of economic stagnation in the early 20th century, an exceptional number of fine historic buildings have survived, making this an outstanding example of an Iberian colonial town. 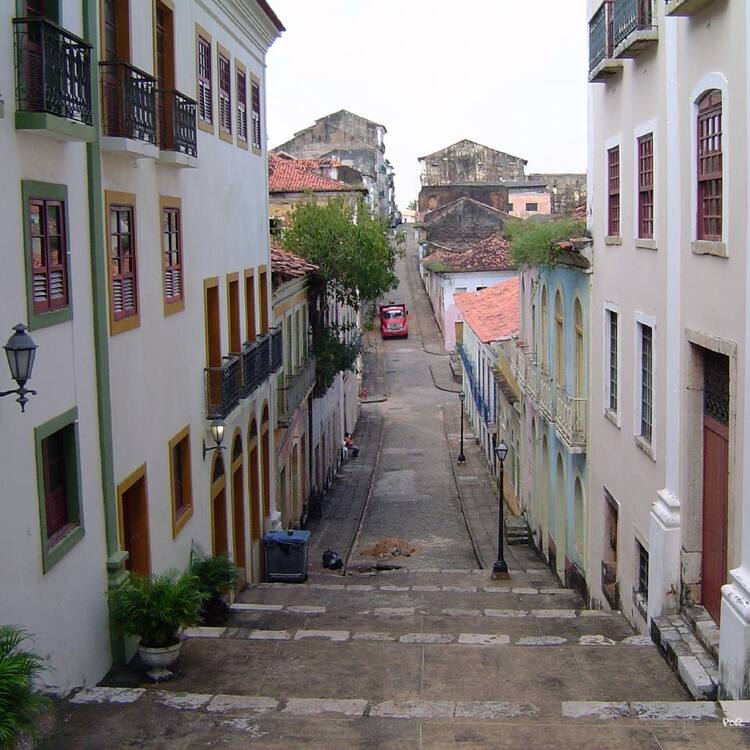 Located on the promontory formed by the Rivers Anil and Bacanga, northwest of São Luís Island, the Historic Centre of São Luís do Maranhão is characterized by its urban grid of streets lined with residential buildings of various heights, many with tiled roofs, painted ornamented cornices, tall narrow windows set in decorated surrounds and balconies with forged or cast iron railings. They date from the 1615 plan laid out by Portugal’s chief engineer in Brazil, following conquest of the fort that had been established on the site by the French in 1612. Harmoniously expanded through the 18th, 19th and 20th centuries, the historic centre is an outstanding example of a Portuguese colonial town adapted to the climatic conditions of Equatorial America, with traditional Portuguese architecture adapted to incorporate raised piers and shuttered, wooden verandas. The singularity of the construction techniques employed is expressed in the elegance of the traditional Portuguese azulejos tile work applied both as insulation and decoration; in the modulated use of occupied and empty spaces reinforced by crafted stonework; and in the sharp contrast between the dense ornamentation of the facades overhanging the streets and porches that open wide from side to side into interior patios, lined by a continuous series of venetians, lattices, and frames.

Criterion (iv): The Historic Centre of São Luís is an outstanding example of a Portuguese colonial town adapted to the climatic conditions of equatorial South America.

Criterion (v): The Historic Centre of São Luís is an outstanding example of a colonial town which has preserved its urban fabric, harmoniously integrated with its natural setting, to an exceptional degree.

The urban texture of the Historic Centre of São Luís remains intact, reflecting elements that date to the city’s founding and consolidation. While São Luís has been subject to expansion by virtue of its status as a living city and specific role as the state capital of Maranhão until the end of the 19th century, it has not lost the essence of its origins, reflected in the preservation of the historical centre and the 17th century architectural complex and urban grid. These elements serve to illustrate the city’s importance to the region’s territorial settlement.  The Historic Centre is however extremely vulnerable to abandonment and neglect, and measures are being taken to address this issue, despite the urban rehabilitation initiatives to restore the architectural and enhance the area’s landscape value.

The overlay of the various periods in the evolution of the Historic Center of São Luís, from inception of the original site in the 16th century, reflected in the French fortifications; through growth of the Portuguese city in the 17th century; to its splendorous moment in the 18th century as the capital of Grão Pará; and its rise as the homogenous aristocratic commercial metropolis of the 19th century, remain in evidence in the historic centre’s structural elements. The authenticity of materials and substance in buildings, street pattern and layout, and urban spaces is high, and is respected by official bodies and inhabitants alike. Traditions, uses, and customs directly linked to Brazilian cultural identity continue to be maintained.

The urban management of São Luís’ Historic Centre is performed at the three levels of government: federal, state, through the municipal policies governing the preservation of local historical heritage property.

Following the city’s registration on UNESCO’s World Heritage List in 1997, there was a substantial increase in the demand for public measures to preserve the site and in the interest of government institutions to raise public awareness regarding the issue. To this end, the São Luís Municipal Government began developing the necessary instruments to safeguard the city’s heritage, establishing in 1998 the Cultural Heritage Coordination (Coordenação de Patrimônio Cultural).

In 2003, the local government created the Historic Centre Management Centre (Núcleo Gestor do Centro Histórico) through Decree-Law 25441 to serve as an umbrella for the competent public agencies (municipal, state, and federal), organized civil society stakeholders, and private institutions to: integrate municipal measures and leverage the ties and partnerships forged between the various administrative and management levels; organize the delivery of public services to the Historic Centre; take steps to settle immediate problems arising in the area; propose activities and projects to spur local economic activity and ensure the sustainability of production and consumption patterns in the historical site, among other initiatives.

By virtue of this effort, the Municipal Foundation for Historical Heritage (Fundação Municipal de Patrimônio Histórico – FUMPH) was established in 2005 for the purpose of implementing operational planning and executing municipal historical heritage policies, as well as local policy initiatives aimed at safeguarding and protecting the municipality’s cultural heritage, as mandated in the Fundamental Law of São Luís.

In 2008, the Historic Center Management Centre (Núcleo Gestor do Centro Histórico) was dissolved due to a lack of effective policy coordination among the different spheres of government. While in operation, it did, however, provide a concrete experience in joint collaboration between the three levels of government.

The applicable urban administration and management regulations aimed at preserving the Cultural Heritage Site include the Municipal Master Plan of São Luís (Plano Diretor do Município de São Luís – 2006), through which protection of the site was integrated to the planning and territorial settlement process as part of the Municipal.

Others municipal ordinances serves to incentivize the preservation and maintenance of properties in the city centre as well, including Law 3836 of June 21, 1999, which waives local property tax assessments (Imposto sobre a Propriedade Predial e Territorial Urbana – IPTU) for well-conserved and preserved properties. Additional legislative instruments have been enacted to address the problem of property abandonment and inadequate maintenance, among them Law 4478/2005, which regulates articles 1275 and 1276 of the Brazilian Civil Code (Código Civil Brasileiro) governing property abandonment.

In the context of the effort to strengthen the specific applicable legislation, the following instruments must still be updated and adequately adapted: the Zoning Law (Lei de Zoneamento), the Urban Land Use and Occupation Ordinance (Uso e Ocupação do Solo Urbano – 1992), the Urban Building Code (Código de Posturas – 1968).

Beyond these initiatives, an additional provision still required within the scope of the specific municipal legislation governing the Historic Centre include standardizing the procedures for intervening in public buildings and spaces located in the protected zone, with a view to facilitating coordination among the responsible public agents. Further the process of population exodus caused by the relocation of traditional functions and uses to other areas of the city has led to the progressive abandonment and underutilization of buildings, which has exacerbated the problem of irregular occupation and the attendant risks. This challenging problem has been addressed on two fronts: first, through a review of the applicable municipal urban guidelines, with a view to augmenting the area’s attractiveness as a functional urban space; second, through the promotion of initiatives to constrain ongoing population exodus and abandonment – including the São Luís Historic Centre Revitalization Program (Programa de Revitalização do Centro Histórico de São Luís – PROCIDADES) – IADB and São Luís Municipal Government (under negotiation); the National Tourism Development Program (Programa Nacional de Desenvolvimento do Turismo – PRODETUR) – Maranhão State Government (under negotiation); and the Growth Acceleration Program for the Expansion of Historic Cities (Programa de Aceleração do Crescimento das Cidades Históricas – PAC Cidades Históricas) (under negotiation) – an effort encompassing a diversity of actions aimed at protecting and preserving the Historic Center, as agreed to between IPHAN and the State and Municipal Governments under the 2010-2013 Plans of Action and the applicable Cultural Heritage Preservation Agreements (Acordos de Preservação do Patrimônio Cultural)
Activities (2)