Several monumental statues of human figures can be seen in the park, which also contains many hypogea dating from the 6th to the 10th century. These huge underground tombs (some burial chambers are up to 12 m wide) are decorated with motifs that reproduce the internal decor of homes of the period. They reveal the social complexity and cultural wealth of a pre-Hispanic society in the northern Andes. 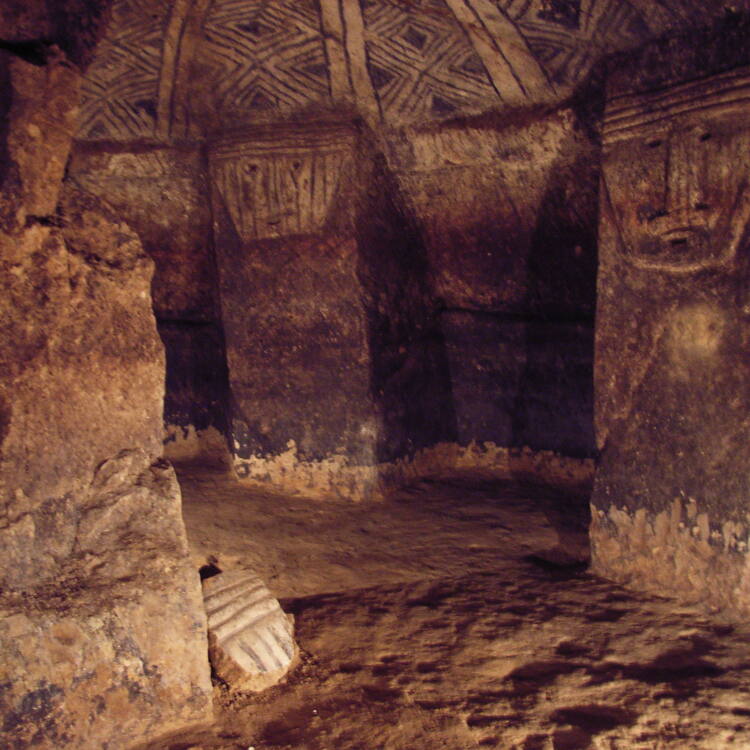 The National Archaeological Park of Tierradentro is located in the south-western of Colombia in Andean's central cordillera, in the municipality of Inzá, department of Cauca. Four areas, dispersed over a few square kilometres, make up the archaeological park: Alto de San Andrés, Alto de Segovia, Alto del Duende, El Tablón and as a site of importance but outside the park boundary the Alto del Aguacate. The park contains all known monumental shaft and chamber tombs of Tierradentro culture, the largest and most elaborate tombs of their kind.

The area holds the largest concentration of pre-Columbian monumental shaft tombs with side chambers--known as hypogea—which were carved in the volcanic tuff below hilltops and mountain ridges. The structures, some measuring up to 12 m wide and 7 m deep, were made from 600 to 900 AD, and served as collective secondary burial for elite groups. The degree of complexity achieved by the architecture of these tombs with chambers that resemble the interior of large houses is evident in the admirable carving in tuff of the stairs that give access to a lobby and the chamber, as well as in the skilful placement of core and perimeter columns that required very careful planning. The tombs are often decorated with polychrome murals with elaborate geometric, zoomorphic and anthropomorphic designs in red and black paint on a white background, and the chambers of the more impressive underground structures were also decorated with elaborate anthropomorphic carvings. The smaller hypogea vary from 2.5 m to 7 m in depth, with oval floors 2.5-3 m wide, while the chambers of the largest examples may be 10-12 m wide. Most impressive of the latter are those with two or three free-standing central columns and several decorated pilasters along the walls with niches between them.

The symbolic symmetry achieved between the houses of the living above ground and the underground hypogea for the dead, by means of a limited but elegant number of elements, not only conveys an aesthetic sensation but also evokes a powerful image of the importance of a new stage into which the deceased has entered and the continuity between life and death, between the living and the ancestors.

The present state of archaeological and anthropological knowledge suggests that the builders of the hypogea (underground tombs) lived in the mountain slopes and valleys in the area. In the valleys they established small settlements whereas on the hillsides settlement was dispersed, close to the fields. The oval-plan residential sites were built on artificial terraces, with rammed earth floors. The wooden frames were filled with wattle-and-daub and the roofs were thatched. There were no internal divisions and there was a single combustion zone, with wooden benches for sleeping. The magnitude of the underground works and the way in which human remains were disposed inside the hypogea indicate the existence of a hierarchical social and political structure based on chiefs with priestly functions. The stone statues of the Tierradentro region are of great importance. They are carved from stone of volcanic origin and represent standing human figures, with their upper limbs placed on their chests. Masculine figures have banded head-dresses, long cloths and various adornments whereas female figures wear turbans, sleeveless blouses and skirts. There are feline and amphibious representations manifested in sculptures.

Underground tombs with side chambers have been found over the whole of America, from Mexico to north-western Argentina, but their largest concentration is in Colombia. However, it is not only the number and concentration of these tombs at Tierradentro that is unique but also their structural and internal features.

Criterion (iii): The archaeological area of Tierradentro, with its complex of hypogeal, are a unique testimony to the everyday life, ritual and the singular conception of burial space, of a developed and stable society. It also reveals the social complexity and cultural wealth of a pre-Hispanic society in the northern Andean region of South America.  The site provides a unique testimony to the high level of artistic and social culture of the region over its long prehispanic history.

The National Archaeological Park of Tierradentro was specifically delimited to include and preserve all known monumental hypogea of the Tierradentro culture. These 162 in situ pre-Columbian subterranean tombs are protected inside 4 sites: Alto de San Andres with 23 hypogea, the Alto de Segovia with 64 tombs, the Alto del Duende, with 13 burials, and the Alto del Aguacate with 62 hypogea arranged along a 250 meter long ridgeline. The park also includes the site of El Tablón where stone sculptures associated to tombs of earlier periods are also protected and placed on display. The hypogea are located inside areas than also contain undisturbed archaeological remains of all periods. Thus, the park, by including all monumental tombs and also their surrounding sites adequately preserves the attributes that sustain the Outstanding Universal Value of the Tierradentro ceremonial complex.

The main attributes of Tierradentro hypogea are the architectural features of the tombs, including the stairs and chambers, and the internal decoration including carvings and mural paintings. Those features have retained their original characteristics. The sites were abandoned before the 13Th century AD and modern occupation gradually uncovered the tombs, many of which were opened and looted during the 18th and 19th centuries. During the early 20th century the Colombian government created the park, protecting them and starting inventory and scientific research. The architecture of the tombs has been preserved in most cases and interventions have been limited to those required for protecting the carvings or paintings from further natural deterioration or in few cases for reconstruction of structural columns and stairs. Natural erosion and earthquakes have affected a number of tombs but human interventions have not caused any significant change in the original layout and features of the tombs, although authenticity has been modified in some cases by inappropriate earlier interventions.

The park is a national property under the administration of the Colombian Institute of Anthropology and History-ICANH, the only national authority in archaeological heritage. The ICANH designs and executes annual plans to ensure the effective preservation and conservation of Tierradentro Archaeological Park. These include preservation, research, environmental studies, analysis of social contexts and management systems. These include also identifying and managing the main threats to the funerary structures and minimizing damages caused by earthquakes, which added to the high levels of interior relative humidity and the intrinsic characteristics of the volcanic tuffs from which they were excavated, can alter both the structural elements and decorative paint and carvings.

The open air public exhibition of 80 of the hypogea, 9 statues as well as related archaeological materials at the site´s museum serves to increase public awareness and support for cultural conservation efforts.

Using the annual plans as a basis, the master management plan for the World Heritage property will meet the following objectives: provide continuity to the preventive actions and interventions  contemplated by the plan, strengthen opportunities for involving wider sectors of the community of the park's area of influence, particularly from the neighbouring indigenous resguardo of San Andrés de Pisimbalá, build strategic alliances to ensure the protection, continuity, and integrity of the site, identify the existence and distribution of site structures (excavated and unexcavated) using non-intrusive archaeological techniques and improve our understanding of the characteristics of each set of structures, including loads, resistance and vulnerability. To achieve these goals, the ICANH continually seeks additional resources for strengthening the interdisciplinary team of researchers and advisers, and to give continuity to the required actions and interventions, thus ensuring the integrity and sustainability of National Archaeological Park of Tierradentro.

Dossier: 743
Department of Cauca, in the jurisdiction of the municipality of Inza, in the “corregimiento” of San Andres de Pisimbalá
N2 34 60 W76 1 60
Web Browser not supported for ESRI ArcGIS API version 4.10. WebGL must be enable, see documentation
top
Forgot your username or password?
Become a member