The List Historic Villages of Shirakawa-go and Gokayama
Print

Located in a mountainous region that was cut off from the rest of the world for a long period of time, these villages with their Gassho-style houses subsisted on the cultivation of mulberry trees and the rearing of silkworms. The large houses with their steeply pitched thatched roofs are the only examples of their kind in Japan. Despite economic upheavals, the villages of Ogimachi, Ainokura and Suganuma are outstanding examples of a traditional way of life perfectly adapted to the environment and people's social and economic circumstances. 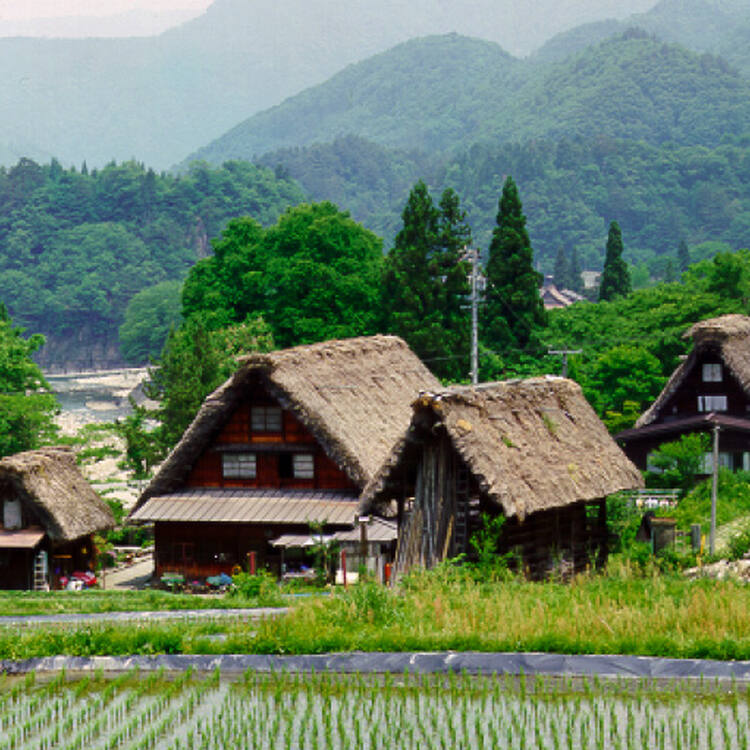 The Gassho-style houses found in the Historic Villages of Shirakawa-go and Gokayama are rare examples of their kind in Japan. Located in a river valley surrounded by the rugged high-mountain Chubu region of central Japan, these three villages were remote and isolated, and access to the area was difficult for a long period of time. The inscribed property comprises the villages of “Ogimachi” in the Shirakawa-go region, and “Ainokura” and “Suganuma” in the Gokayama region, all situated along the Sho River in Gifu and Toyama Prefectures. In response to the geographical and social background, a specific housing type evolved: rare examples of Gassho-style houses, a unique farmhouse style that makes use of highly rational structural systems evolved to adapt to the natural environment and site-specific social and economic circumstances in particular the cultivation of mulberry trees and the rearing of silkworms. The large houses have steeply-pitched thatched roofs and have been preserved in groups, many with their original outbuildings which permit the associated landscapes to remain intact.

Criterion (iv): The Historic Villages of Shirakawa-go and Gokayama are outstanding examples of traditional human settlements that are perfectly adapted to their environment and their social and economic raison d’être.

Criterion (v): It is of considerable significance that the social structure of these villages, of which their layouts are the material manifestation, has survived despite the drastic economic changes in Japan since 1950. As a result they preserve both the spiritual and the material evidence of their long history.

Ogimachi, Ainokura, and Suganuma are rare examples of villages in which Gassho-style houses are preserved at their original locations and in groups, as they developed in the area along the Sho River. Although since the Second World War there has been a reduction in the number of Gassho-style houses in each village, the inscribed property includes clusters of all the remaining Gassho-style houses which allows each village to retain its traditional appearance and character. Moreover, there has been no significant change to the system of roads and canals and traditional land-use patterns including trees and forest, and agricultural land.

The detrimental effects on the scenic landscape of a major highway construction less than one kilometre from Ogimachi and Suganuma has been reduced with plantings along the roadside and embankments, controls on bridge design and other protections for the view from Ogimachi Village.

The integrity of the property, therefore, is ensured in the contexts of both wholeness and intactness.

The three settlements constitute important historical evidence in and of themselves. The villages have existed since the 11th century and each has a strong sense of community. Traditional social systems and lifestyle customs have sustained the Gassho-style houses and their associated historic environments. From the viewpoints of setting, function, and traditional management systems, the level of authenticity is high.

While the conventional collaboration efforts by residents have functioned to maintain thatched roofs in good conditions, long-established Japanese restoration practices and principles are applied in cases in which deterioration necessitates major conservation work. Special attention is paid to the use of traditional materials and techniques, and the use of new materials is rigorously controlled. In view of the standardized modular construction of similar types of traditional wooden structures, reconstruction and replacement involve a minimum amount of conjecture. The Gassho-style houses retain their authenticity from the perspective of form and design, as well as materials and substance.

Each of the three villages – Ogimachi, Ainokura, and Suganuma – is classified as an Important Preservation District for Groups of Historic Buildings under the 1950 Law for the Protection of Cultural Properties. This classification requires, inter alia, the preparation of municipal ordinances and preservation plans for protection, restrictions on activities that may alter the existing landscape, authorization procedures, and the provision of subsidies for approved actions. Ainokura and Suganuma are also designated as Historic Sites under the 1950 Law, and proposed alterations to the existing state must be approved by the national government. In addition, a conventional collaboration system for maintaining Gassho-style houses has been retained by the residents.

There are double buffer zones around each of the villages; an individual buffer zone surrounds each nominated property and a larger buffer zone that contains all three villages. Development pressures throughout the entire village of Ogimachi are controlled by the 2008 Shirakawa Village Landscape Ordinance, which was developed under the 2004 Landscape Law to reinforce the former 1973 Shirakawa Village Ordinance for the Natural Environment. Shirakawa Village must be notified of any proposed large-scale project, in order to confirm that the proposed work will fit in with the character of the historic and natural environment. Under the same ordinance, stricter regulations are imposed on the area immediately surrounding the World Heritage property of Ogimachi (471.5 ha).

The buffer zones immediately surrounding Ainokura, and Suganuma are protected as Historic Sites as mentioned above and as Gokayama Prefectural Natural Park under the Toyama Prefectural Natural Parks Regulations. In addition, further protection is provided under municipal ordinances implemented by Nanto City. All of these regulations and ordinances impose considerable constraints on any kind of activity that might be deemed harmful.

Overall responsibility for the protection of the property rests with the Agency for Cultural Affairs of the Government of Japan. The associated bodies include the Ministry of the Environment, the Ministry of Agriculture, Forestry and Fisheries (including the Forestry Agency), the Ministry of Land, Infrastructure, Transport and Tourism, Gifu Prefecture, Toyama Prefecture, Shirakawa Village, and Nanto City.

Direct management of individual buildings is the responsibility of their owners, and all work is supervised as prescribed in the Preservation Plans. Routine repair work has always been carried out by the owners, and often through conventional collaborative efforts by communities, using traditional techniques and materials. The local and national governments provide both financial assistance and technical guidance.

As fire is a major hazard for the property, elaborate fire-extinguishing systems have been installed in all three village zones. Fire-fighting squads of residents are also organized.