The Birka archaeological site is located on Björkö Island in Lake Mälar and was occupied in the 9th and 10th centuries. Hovgården is situated on the neighbouring island of Adelsö. Together, they make up an archaeological complex which illustrates the elaborate trading networks of Viking-Age Europe and their influence on the subsequent history of Scandinavia. Birka was also important as the site of the first Christian congregation in Sweden, founded in 831 by St Ansgar. 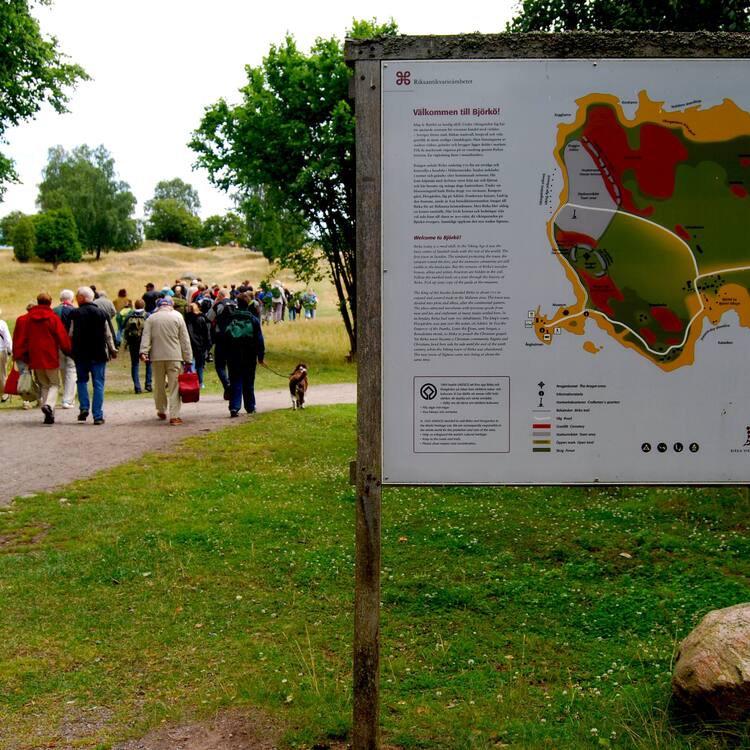 Birka and Hovgården, which are located about 30 km west of Stockholm on the small islands of Björkö and Adelsö in Lake Mälaren, represent complete and exceptionally well-preserved archaeological sites from the Viking Age. In this serial property, the surviving visible evidence of the prehistoric society includes structures in the mercantile town, the royal domain and the harbour, defence systems, and prehistoric cemeteries.

The town of Birka was optimally situated on Björkö Island at the convergence of several important waterways. Its activities were organized and governed from the royal residence at Hovgården, situated across the strait on the neighbouring island of Adelsö. Birka was one of the most important mercantile towns in Northern Europe between about AD 750 and AD 980. It was the hub of a widespread trading network established by the Scandinavians during the Viking Age and was a powerful catalyst for the social development of the Baltic region. This potent combination of location and initiative laid the foundation for the phenomenal political and economic expansion that came to characterize this dynamic era, and contributed to the enduring and widespread reputation of the Scandinavian Viking Age. Birka is also notable as the place of the first recorded attempt to Christianize the Swedes, by the Frankish missionary Anskar in 829-831.

Mercantile activities at Birka ceased at the end of the 10th century. Some form of social transformation – possibly related to logistical difficulties – may have caused Birka’s central function in the Svealand region to be overtaken by the new town of Sigtuna. The fact, however, that the royal domain of Hovgården continued to exist for many years after Birka’s abandonment testifies to the enduring importance of this place. It also underlines the legitimacy and unique position of Birka and Hovgården during the Viking Age. A runic stone at Hovgården, carved around 1070, is evidence of the king’s presence. Several kings resided at Hovgården during the 1200s; one of them, Magnus Ladulås, completed a brick and stone building known as Alsnö hus. This building was the venue for the Royal Council of 1280, which established the foundation of the Swedish medieval feudal system.

Criterion (iii): The Birka and Hovgården complex bears exceptionally well preserved testimony to the wide-ranging trade network established by the Vikings during the two centuries of their phenomenal economic and political expansion.

Criterion (iv): Birka is one of the most complete and undisturbed examples of a Viking trading settlement of the 8th to 10th centuries.

Within the boundaries of the 226 ha serial property are located all the elements necessary to express the Outstanding Universal Value of Birka and Hovgården. The elements still visible at Birka include a hill fort, the town rampart, grave mounds in the cemeteries surrounding the “Black Earth”, and the site of the Viking Age settlement. Other remains from the period include jetties and harbours along the shoreline. Visible elements at the Hovgården royal domain, adjacent to Adelsö church, include several monumental mounds, a cemetery, a harbour, a runic stone, and the foundations of Alsnö hus, a 13th-century brick and stone palace situated on top of an earthen terrace. Remains of Birka and Hovgården’s exceptional cultural materials are found both on land and in the waters adjacent to the property, and include everything from everyday utensils and food preparation to crafts and items of trade from faraway places. Less than one percent of the property has been archaeologically excavated, and approximately one-third of Birka’s more than 3,000 graves have been investigated. Its boundaries adequately ensure the complete representation of the features and processes that convey the serial property’s significance, and there is a 2,272 ha buffer zone. The property does not suffer unduly from adverse effects of development and/or neglect. Measures are needed to further protect areas of the buffer zone, however, mainly regarding the construction of new buildings.

The archaeological site of Birka and Hovgården is entirely authentic in terms of locations and settings, forms and designs, and materials and substances. No constructions have been built within the archaeological site. To fulfil the needs of visitors at Birka, a few buildings have been built in the buffer zone – a site museum, four reconstructed Viking-Age houses, an area for children’s activities, and complementary facilities for visitors and staff. No such public access buildings have been built in the area of Hovgården.

Identified potential threats and risks to the authenticity of Birka and Hovgården include environmental hazards such as ground or forest fires, over-fertilisation of farms, shoreline damage from nearby leisure and passenger boat traffic, and transport of hazardous products near the islands; damage to the ground surface by visitors; depopulation of Björkö Island; and lack of an archaeological research plan.

Birka and Hovgården and its buffer zone are formally protected under the Historic Environment Act (1988:950), regulations, and municipal planning instruments. The property is owned by the National Property Board of Sweden, a governmental agency, which together with the Stockholm County Administrative Board and Ekerö Municipality form a Management Board that is responsible for protecting and managing the property. This Board has produced a management plan for the property, and is responsible for the implementation and follow-up of the plan. Birka and Hovgården’s location on small islands and their long-standing public ownership have greatly contributed to safeguarding this property from inappropriate planning and development.

Sustaining the Outstanding Universal Value of the property over time requires addressing the identified potential threats and risks to Birka and Hovgården, including development pressure in the buffer zone, environmental hazards, visitor pressures, depopulation, and the lack of a research plan.