Located in the central part of the peninsula of Baja California, the sanctuary contains some exceptionally interesting ecosystems. The coastal lagoons of Ojo de Liebre and San Ignacio are important reproduction and wintering sites for the grey whale, harbour seal, California sea lion, northern elephant-seal and blue whale. The lagoons are also home to four species of the endangered marine turtle. 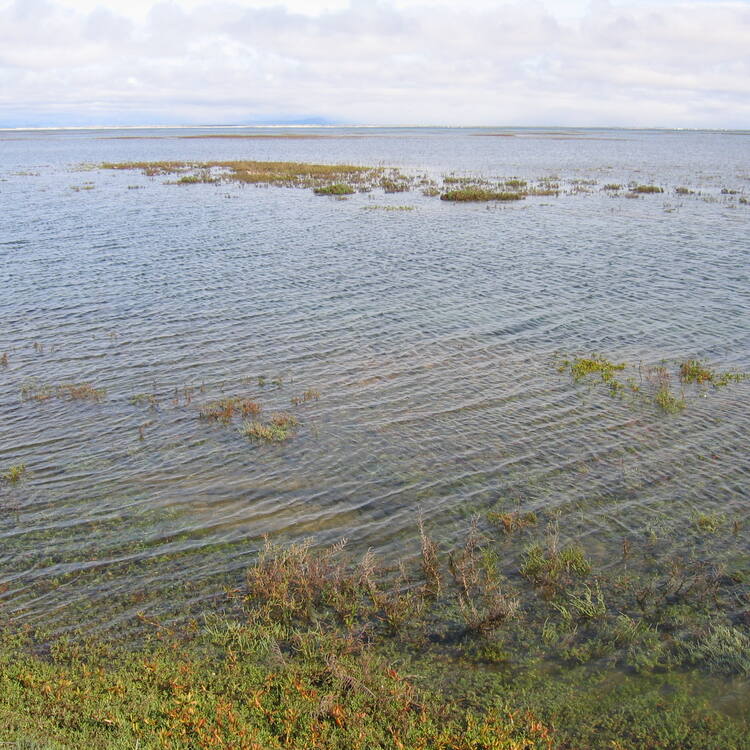 The Whale Sanctuary of El Vizcaino is a serial property on the Pacific Coast of the central part of Mexico's Baja California Peninsula. It comprises two coastal lagoons, Laguna Ojo de Liebre and Laguna San Ignacio, and their surroundings, a complex mosaic of wetlands, marshes, halophytes, dunes and desert habitats, as well as mangroves in the transition areas. The total extent of the two components of the property is of 370,950 hectares, embedded in the much larger El Vizcaino Biosphere Reserve, Mexico's largest protected area, which in turn is contiguous with another large conservation area to the North. The lagoons are recognized as the World's most important place for the reproduction of the once endangered Eastern subpopulation of the North Pacific Grey Whale. The protection of these winter breeding grounds has been paramount in the remarkable recovery of this species after near-extinction as a result of commercial whaling, including in these very lagoons. Most of the subpopulation migrates between the lagoons and the summer feeding grounds in the Chukchi, Beaufort and Northwestern Bering Seas.

The lagoons are home to numerous other marine mammals, such as Bottlenose Dolphin, California Sea Lion and Harbor Seal. Four marine turtle species occur in the shallow waters which are also an important habitat and nursery for a large number of fish, crustaceans, and others forms of life. Countless breeding and migratory bird species, including for example a major resident osprey population and more than half of Mexico´s wintering population of Brant Goose depend on the lagoons and adjacent habitats. This exceptional sanctuary conserves both marine and terrestrial ecosystems and their delicate interface. The surrounding desert, biogeographically part of the Sonoran Desert, boasts highly diverse flora and fauna.

Despite the protection status, the property is susceptible to the potential impacts of economic activities taking place in the immediate vicinity of the lagoons, in particular benthic and pelagic fisheries, large-scale salt extraction and tourism.

Criterion (x): The Whale Sanctuary of El Vizcaino contains the most important breeding grounds of the Eastern subpopulation of the North Pacific Grey Whale. Its protection is intricately linked with saving the species from extinction and recovery after near-collapse due to excessive commercial whaling. Many environmental factors, such as depth, temperature, nutrients, and salinity coincide in Ojo de Liebre and San Ignacio lagoons to make them ideal mating, breeding and calving grounds. The lagoons also provide valuable habitat for numerous other marine mammals, such as Bottlenose Dolphin, California Sea Lion and Harbor Seal. Four species of marine turtles have been recorded in the lagoons and adjacent coasts, the most important being the green and the loggerhead sea turtles. The shallow, well-protected lagoons with their mangrove stands are also highly productive nurseries for a diverse fish fauna and boast rich invertebrate fauna, and an impressive natural landscape and seascape. The surrounding wetlands attract an extraordinary diversity and abundance of resident and migratory bird species with several hundreds of thousands of wintering birds. The drier terrestrial areas belong to the Sonoran Desert, well-known for its remarkably diverse flora and fauna and a high degree of endemism.

The boundaries of the property cover the coastal lagoons of Ojo de Liebre and San Ignacio in their entirety. Thereby they encompass a major area of sensitive Grey Whale habitat, a key conservation value of the property. The property is embedded in El Vizcaino Biosphere Reserve, Mexico's largest protected area and is also an integral part of an even larger contiguous conservation complex. The vast terrestrial protected areas serve as a terrestrial buffer for the lagoons, including as regards the maintenance of sea-land interactions. The biosphere reserve including, and surrounding, the property also comprises a marine strip of five kilometers from the coast as a buffer zone, also serving as a de facto marine buffer zone for the property.

It is important to note that the breeding Grey Whale population, an extraordinary conservation feature of global importance, only spends a relatively small part of its life cycle within the property. In this sense, the property is a telling example of both the benefits and the shortcomings of in-situ conservation. The future of the Eastern subpopulation of the North Pacific Grey Whale will no doubt depend on both the successful conservation of the property and broader international efforts beyond specific sites.

Human impacts are relatively limited. At the same time, it is remarkable that even in a remote desert human activities have been putting increasing pressure on the natural environment. While the whaling has come to a complete halt in the property, ongoing reasons for concern include but are not limited to excessive fisheries, extensive evaporation salt production and uncontrolled tourism development.

Requirements for Protection and Management

The first applicable conservation effort is the Convention for the Protection of Migratory Birds and Game Mammals, a bilateral agreement between Mexico and the United States of America ratified in 1937. Another framework is Mexico's adherence to the International Whaling Commission in 1949, which has been protecting Grey Whales from commercial whaling since its establishment. More recent federal legislation on threatened and endangered native species lists the Grey Whale as "subject to special protection."

A Federal Decree in 1971 established a marine refuge zone for whales in Laguna Ojo de Liebre, followed by another decree one year later establishing several refuges around the lagoons. Yet another decree established a refuge for cetaceans in Laguna San Ignacio in 1979. In 1988, the federal government declared El Vizcaino a biosphere reserve, encompassing today's property. El Vizcaino was recognized internationally under the UNESCO Man and the Biosphere Programme in 1993.

The Laguna Ojo de Liebre is located next to the port town of Guerrero Negro, a centre for whale-watching but also the site of industrial-scale salt extraction. Vessels transport the salt out of the lagoon to an offshore deep water dock. This vessel traffic, along with other vessel traffic along the coast and increasing numbers of tourist boats, entails risks of disturbance, contamination an even collision with marine mammals. Unlike in Laguna San Ignacio, mining exploration and exploitation are not explicitly prohibited in Ojo de Liebre, bearing a potential risk of future salt extraction at the expense of critical Grey Whale habitat.

Overfishing and illegal fishing occurs in and around both lagoons and is also a broader concern along the Pacific Coast. Besides complex impacts on the marine ecosystems in the lagoons, Grey Whales, other marine mammals and marine turtles can fatally suffer from entanglement in fishing gear. Tourism and related coastal development have a number of undesired impacts when not managed properly, for example inadequate waste management but also direct disturbance through irresponsible and excessive whale-watching. There is also uncontrolled off-road driving and poaching in the surrounding desert. The impressive natural landscape and seascape requires careful planning and management to maintain the integrity of this property.

The challenges are documented in sophisticated management programmes. The Whale Sanctuary of El Vizcaino has the potential to serve as an example of integrated management of natural resources. Beyond the conservation of an outstanding place there is room for sustainable use of natural salt, harvesting of marine resources and whale-watching. This, however, requires a permanent balancing of interests including those from local communities whose livelihoods depend on the natural resources protected in this property. It also requires skilled and motivated staff, adequate financial resources, and full support from local communities to conservation and management activities. 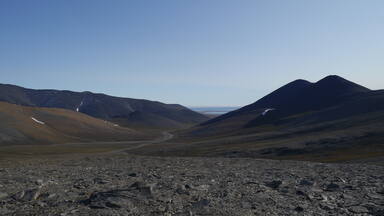 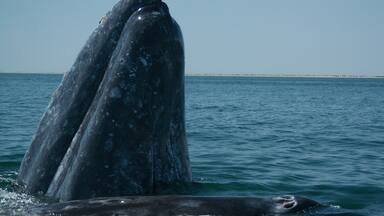 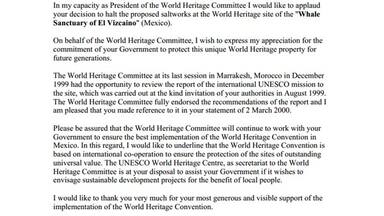