Founded in 1070–72 by the Almoravids, Marrakesh remained a political, economic and cultural centre for a long period. Its influence was felt throughout the western Muslim world, from North Africa to Andalusia. It has several impressive monuments dating from that period: the Koutoubiya Mosque, the Kasbah, the battlements, monumental doors, gardens, etc. Later architectural jewels include the Bandiâ Palace, the Ben Youssef Madrasa, the Saadian Tombs, several great residences and Place Jamaâ El Fna, a veritable open-air theatre. 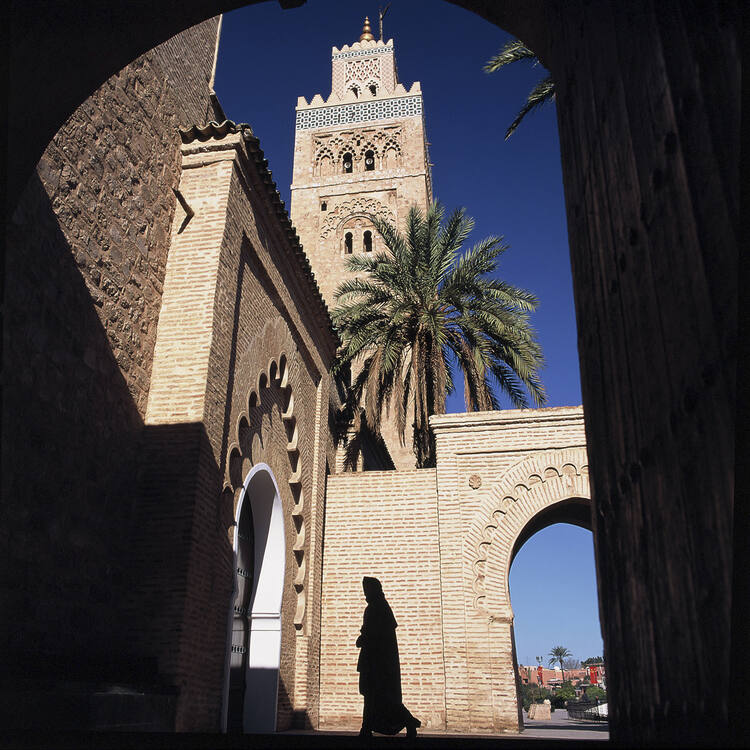 Founded in 1070-1072 by the Almoravids (1056-1147), capital of the Almohads (1147-1269), Marrakesh was, for a long time, a major political, economic and cultural centre of the western Muslim world, reigning in North Africa and Andalusia. Vast monuments dating back to that period: Koutoubia Mosque, with the matchless minaret of 77 metres, an essential monument of Muslim architecture, is one of the important landmarks of the urban landscape and the symbol of the City, the Kasbah, ramparts, monumental gates and gardens. Later, the town welcomed other marvels, such as the Badiâ Palace, the Ben Youssef merdersa, les Saâdians tombs,  Bahia Palace and large residences. Jamaâ El Fna Square, inscribed on the Representative List of the Intangible Cultural Heritage, is a true open-air theatre that always amazes visitors. Due to its still protected, original and well conserved conception, its construction materials and decoration in constant use, and its natural environment (notably the Gardens of Aguedal, Ménara and the Palm Grove (Palmeraie) the plantation of which is attributed to the Almoravids), the Medina of Marrakesh possesses all its initial components both cultural and natural that illustrate its Outstanding Universal Value.

Criterion (i): Marrakesh contains an impressive number of masterpieces of architecture and art (ramparts and monumental gates, Koutoubia Mosque, Saâdians tombs, ruins of the Badiâ Palace, Bahia Palace, Ménara water feature and pavilion) each one of which could justify, alone, a recognition of Outstanding Universal Value.

Criterion (ii): The capital of the Almoravids and the Almohads has played a decisive role in medieval urban development.  Capital of the Merinids, Fès Jedid (the New town), integral part of the Medina of Fez, inscribed in 1981 on the World Heritage List, is an adaptation of the earlier urban model of Marrakesh.

Criterion (iv): Marrakesh, which gave its name to the Moroccan empire, is a completed example of a major Islamic capital of the western Mediterranean.

Criterion (v): In the 700 hectares of the Medina, the ancient habitat, rendered vulnerable due to demographic change, represents an outstanding example of a living historic town with its tangle of lanes, its houses, souks, fondouks, artisanal activities and traditional trades.

The boundary of the property inscribed on the World Heritage List is correctly defined by the original ramparts that enclose all the requisite architectural and urban attributes for recognition of its Outstanding Universal Value.  A revision of these boundaries is envisaged for increased protection of the surroundings of the property.

Nevertheless, the integrity of the property is vulnerable due to pressure from urban development, uncontrolled alterations to upper floors and construction materials of the houses, the abandonment of the Khettaras (underground drainage galleries) and exploitation of the palm groves.

The ramparts, the Koutoubia Mosque, the kasbah, the Saâdians tombs, the ruins of Badiâ Palace, Menara water feature and pavilion, are examples of many monuments that clearly reflect the Outstanding Universal Value of the property. The authenticity of the inner urban structure and of the monuments remains intact.  It is ensured by qualified workmanship carrying out restorations in accordance with standards in force. Reconstruction and redevelopment work carried out in the heart of the historic centre generally respects the original volume and style. The use of traditional materials in these restoration operations has tremendously revived the artisanal trades linked to construction (Zellige, lime plaster (tadallakt), painted and sculpted wood, plastering, wrought ironwork, cabinetmaking, etc.) in addition to trades linked to furnishing and decoration.

Protection measures are essentially related to different laws for the listing of historic monuments and sites, in particular Law 22-80 concerning heritage. In addition to this legislation, each of the more important monuments of the Medina of Marrakesh is protected by specific regulatory texts. Over and above the local services that are involved with the protection of the Medina, the Regional Inspection for Historic Monuments and Sites (attached to the Ministry for Culture) is specifically responsible for the management, restoration, maintenance and conservation of the historic monuments on the one hand, and on the other, the examination of requests for building and development permits and the control of building sites in the Medina, thus constituting a guarantee for a sustainable protection of the site.

The Architectural Charter of the Medina of Marrakesh, developed by the Urban Agency of Marrakesh in cooperation with the Regional Inspection for Historic Monuments and Sites, comprises a management toolfor the safeguarding of the architectural, urban and landscape heritage of the Medina. It will be applied through the establishment of a specific advisory structure. A convention for the implementation of this Charter was signed on 11 November 2008 between the concerned partners.