The semicircular waterfall at the heart of this site is some 80 m high and 2,700 m in diameter and is situated on a basaltic line spanning the border between Argentina and Brazil. Made up of many cascades producing vast sprays of water, it is one of the most spectacular waterfalls in the world. The surrounding subtropical rainforest has over 2,000 species of vascular plants and is home to the typical wildlife of the region: tapirs, giant anteaters, howler monkeys, ocelots, jaguars and caymans. 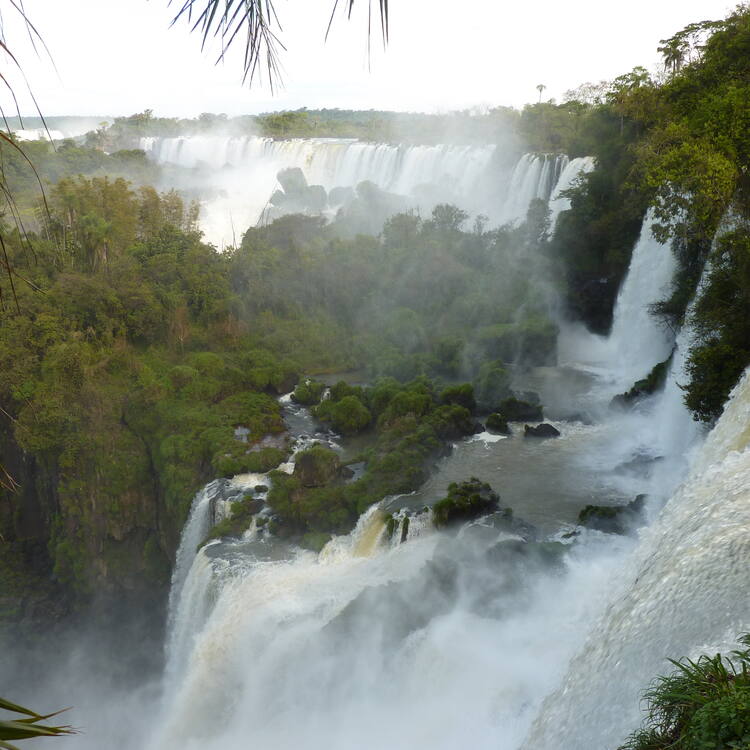 Located in Misiones Province in the Northeastern tip of Argentina and bordering the Brazilian state of Parana to the north, Iguazú National Park, jointly with its sister park Iguaçu in Brazil, is among the world’s visually and acoustically most stunning natural sites for its massive waterfalls. It was inscribed on the World Heritage List in 1984. Across a width of almost three kilometres the Iguazú or Iguaçu River, drops vertically some 80 meters in a series of cataracts. The river, aptly named after the indigenous term for “great water” forms a large bend in the shape of a horseshoe in the heart of the two parks and constitutes the international border between Argentina and Brazil before it flows into the mighty Parana River less than 25 kilometres downriver from the park. Large clouds of spray permanently soak the many river islands and the surrounding riverine forests, creating an extremely humid micro-climate favouring lush and dense sub-tropical vegetation harbouring a diverse fauna.

In addition to its striking natural beauty and the magnificent liaison between land and water Iguazu National Park and the neighbouring property constitute a significant remnant of the Atlantic Forest, one of the most threatened global conservation priorities. This forest biome historically covering large parts of the Brazilian coast and extending into Northern Argentina and Uruguay, as well as Eastern Paraguay, is known for its extreme habitat and species diversity, as well as its high degree of endemism. Around 2000 plant species, including some 80 tree species have been suggested to occur in the property along with around 400 bird species, including the elusive Harpy Eagle. The parks are also home to some several wild cat species and rare species such as the broad-snouted Caiman.

Jointly with contiguous Iguaçu National Park in Brazil, which was inscribed on the World Heritage List in 1986, it constitutes one of the most significant remnants of the so-called Interior Atlantic Forest. Today, the parks are mostly surrounded by a landscape that has been strongly altered due to heavy logging, both historically and into the present, the intensification and expansion of both industrial and small-scale agriculture, plantation forestry for pulp and paper and rural settlements. Jointly, the two sister parks total around 240,000 hectares with this property’s contribution being c. 67,000 hectares.

Criterion (vii):Iguazú National Park and its sister World Heritage property Iguaçu National Park in Brazil conserve one of the largest and most spectacular waterfalls in the world comprised of a system of numerous cascades and rapids and almost three kilometres wide within the setting of a lush and diverse sub-tropical broadleaf forest. The permanent spray from the cataracts forms impressive clouds that soak the forested islands and river banks resulting in a visually stunning and constantly changing interface between land and water.

Criterion (x):Iguazu National Park, together with the contiguous World Heritage property of Iguaçu National Park in Brazil and adjacent protected areas, forms the largest single protected remnant of the Paranaense subtropical rainforest, which belongs to the Interior Atlantic Forest. The rich biodiversity includes over 2000 species of plants, 400 species of birds and possibly as many as 80 mammals, as well as countless invertebrate species.

Next to the waterfalls along the river and on the islands a highly specialized ecosystem full of life has evolved in response to the extreme conditions of the tumbling water and soaking humidity.

Iguazú National Park has a long conservation history dating back to the early 20th Century and was declared a national park in 1934 illustrating the longstanding recognition of its quality. The integrity of Iguazú National Park must be considered in conjunction with the sister property in neighbouring Brazil. Jointly, the two properties constitute a valuable remnant of a once much larger forest area and adequately conserve the splendid system of waterfalls. Effective management of the protected areas and mitigating land use impacts in and from the surrounding landscape increase the likelihood of maintaining many of the values the property has been inscribed for, and contribute to the survival of species that live in the property and wider landscape. The prominent role as a major international and domestic tourism destination makes Iguazú National Park a highly visible property. Threats to it are likely to draw strong attention and there are important political and economic incentives to invest in the future of the property.

Iguazu National Park is owned by the national government and is an integral part of Argentina’s National System of Federal Protected Areas SIFAP (under the National Parks Law Nº 22351) and was created as early as 1934 (Law Nº 12103).

The management of this protected area is in the hands of trained professionals, including rangers. A budget is available to secure the infrastructure and equipment needs to carry out their duties responsibly. A regional technical office lends professional support, and there is a sub-tropical research centre engaged in ecological studies.

Water levels are artificially modified through power plants upriver in Brazil, such as the José Richa or Salto Caxias Hydroelectric Plant, causing scenic and ecological impacts. These impacts require monitoring and mitigation and future impacts need to be prevented.

Tourism management is a key task in the property minimizing the direct and indirect impacts of heavy visitation and maximizing the opportunities in terms of aware-raising for nature conservation and conservation financing.

The value of the property is consolidated by the contiguity with the much larger Iguaçu National Park in Brazil but requires corresponding effective management on both sides of the international border. Over time, an increasing harmonization of planning, management and monitoring is highly desirable and indeed necessary. Ideally, a joint approach will encompass commitment at the highest political levels all the way to tangible activities on the ground based on existing efforts.

Among the threats requiring permanent attention are existing and future hydro-power development upriver, ongoing deforestation in the broader region, including in the adjacent forests in nearby Brazil and Paraguay, agricultural encroachment, as well as poaching and extraction of plants. Tourism and recreation and corresponding transportation and accommodation infrastructure have undoubtedly been impacting on the property and can easily pass the limits of acceptable change.

Given the ongoing transformation of the landscape around the properties in the recent decades future management will have to develop longer term scenarios and plans taking into account this reality. Beyond the relatively small park it will be important to strike a balance between conservation and other land and resource use in Misiones Province so as to maintain or restore the connectivity of the landscape. This will require working with other sectors and local communities. Eventually, the property should be buffered by adequate and harmonized land use planning in the adjacent areas in Argentina, Brazil and Paraguay.