The churches and convents of Goa, the former capital of the Portuguese Indies – particularly the Church of Bom Jesus, which contains the tomb of St Francis-Xavier – illustrate the evangelization of Asia. These monuments were influential in spreading forms of Manueline, Mannerist and Baroque art in all the countries of Asia where missions were established. 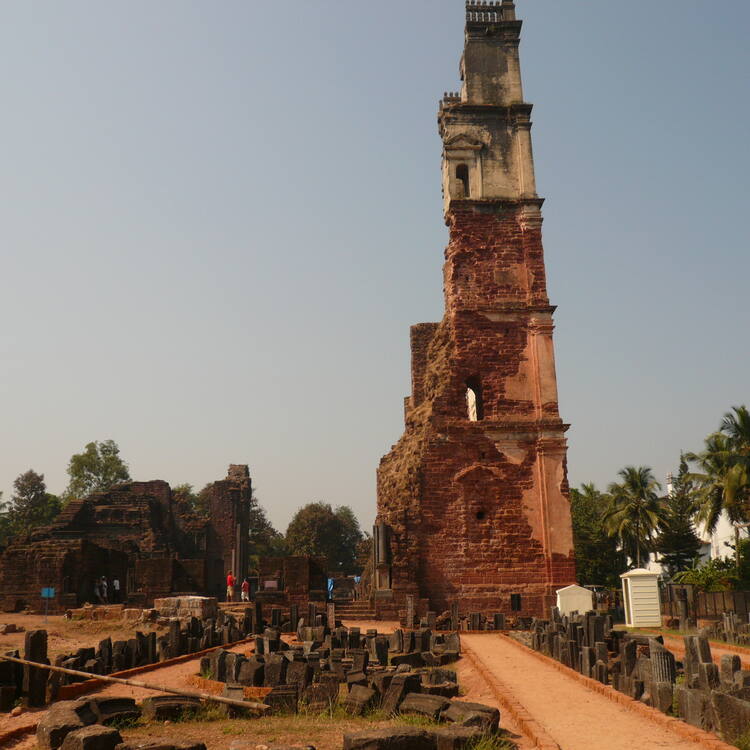 The Churches and Convents of Goa is a serial property located in the former capital of the Portuguese Indies, which is on the west coast of India about 10 km east of the state capital Panjim. These seven monuments exerted great influence in the 16th to 18th centuries on the development of architecture, sculpture, and painting by spreading forms of Manueline, Mannerist, and Baroque art and architecture throughout the countries of Asia where Catholic missions were established. In doing so they eminently illustrated the work of missionaries in Asia.

The earlier village of Ella developed into Goa (present day Old Goa) after it was taken over by the Portuguese, who designated this city as the capital for their occupied territories in Asia in 1730. Many royal, public, and secular edifices were built, as were many sumptuous and magnificent chapels, churches, convents, and cathedrals following the arrival of European religious orders such as the Franciscans, Carmelites, Augustinians, Dominicans, Jesuits, and Theatines. The surviving churches and convents in Goa are the Chapel of St. Catherine (1510), which was raised to the status of cathedral by Pope Paul III in 1534; the Church and Convent of St. Francis of Assisi (1517; rebuilt in 1521  and 1661), with elements in the Manueline, Gothic, and Baroque styles; the Church of Our Lady of Rosary (1549), the earliest of the existing churches built in the Manueline style; Sé Cathedral (1652), with its Tuscan style exterior and Classical orders; the Church of St. Augustine (1602), a complex that fell into ruins, with only one-third of the bell tower standing; the Basilica of Bom Jesus (1605), with its prominent Classical orders; and the Chapel of St. Cajetan (1661), modelled on the original design of St. Peter’s Church in Rome.

The architectural styles followed those in vogue in Europe during the contemporary period, but were adapted to suit the native conditions through the use of local materials and artefacts. The buildings represent the roots of a unique Indo-Portuguese style that developed during Portuguese control of the territory, which lasted for 450 years until 1961. This long period deeply influenced the way of life as well as the architectural style of the place, which spread to missions beyond Goa, creating a unique fusion of Western and Eastern traditions.

Criterion (ii): The monuments of Goa, “Rome of the Orient”, exerted great influence from the 16th to the 18th century on the development of architecture, sculpture and painting by spreading forms of Manueline, Mannerist and Baroque art throughout the countries of Asia where Catholic missions were established.

Criterion (iv): The churches and convents of Goa are an outstanding example of an architectural ensemble which illustrates the work of missionaries in Asia. The wealth of the ensemble compares with the Latin American ensembles included in the World Heritage List (Cuzco, 1983; Ouro Preto, 1980; Olinda, 1982; Salvador de Bahia, 1985).

Criterion (vi):  At the Church of Bom Jesus, Goa conserves Saint Francis-Xavier's tomb. Beyond its fine artistic quality (commissioned in 1665 by the Grand Duke Ferdinand II of Tuscany, it was executed in Florence and includes admirable bronze work by Giovanni Battista Foggini), the tomb of the apostle of India and Japan symbolizes an event of universal significance of the influence of the Catholic religion in the Asian world in the modern period.

The serial property boundary encloses all the structures which together demonstrate the assimilation of Manueline, Mannerist, and Baroque styles with local practices. The property is therefore of adequate size to ensure the complete representation of the features and processes that convey its significance, and does not suffer from adverse effects of development and/or neglect. Regular monitoring and conservation works are undertaken to safeguard the integrity of structural and surface features. Identified potential threats to the integrity of the property include weathering; capillary action on the monuments; and termite action on the wooden carvings and panel paintings.

The churches have been systematically conserved to safeguard the integrity of their structures, which allows several stakeholders to maintain their historic use and function, and occasional services to be held in the other churches, thus safeguarding the functional authenticity of the property. The excavation, the in-situ conservation, and the re-fixing of azulejos (tiles) have had a positive impact on the ruins of the St. Augustine complex site. Ceremonial functions, prayers, weddings, and funerals are also held in the living monuments, along with the feast of the patron saint, Francis Xavier, and the exposition of the sacred relics to commemorate significant events of the Christian ethos. The authenticity of the property is enhanced due to discoveries revealed through excavations within the St. Augustine complex, including the discovery of the relics of St. Ketevan of Georgia, adding to the intangible value of the property.

The serial property is protected and regulated by the Planning and Development Authority (Development Plan) Regulations (1989, 2000), an overarching regulation which clearly demarcates special conservation and preservation zones in the State of Goa, including Old Goa, under the Town and Country Act, under which a Conservation Committee is constituted to oversee and give license to, or reject, applications for infrastructural interventions. Another specific statutory provision applicable nationwide to all centrally protected monuments is the Ancient Monuments and Archaeological Sites and Remains (AMASR) Act (1958) and Rules (1959), amendments (1992), and Amendment and Validation Act (2010).  While there are no special provisions for World Heritage properties, nor is there a Management Plan, the property is being managed by the Management System/Module of the Archaeological Survey of India. The State Party (India) has also empowered the local community through the 72/73rd Amendment to its Constitution to enable local governance; that is, the panchayat of Sé Old Goa, within whose boundaries the World Heritage property is situated, is empowered to participate in and to deliberate on the management of the property.

The World Heritage property is managed and protected at the National level through the local head office by implementing various provisions of the existing Acts and Rules in co-ordination with the State Government authorities. The local head office has adequate manpower, both administrative and well-trained technical personnel, and the funds allotted are sufficient. The National Heritage is managed at the National level under the AMASR (1958) and Rules (1959), and its Amendment and Validation Act (2010). The latter limits any type of construction and/or mining activities in prohibited and regulated areas, 100 m and 200 m respectively from the protected site.

Sustaining the Outstanding Universal Value of the property over time will require taking measures to identify and treat problems related to weathering, capillary action on the monuments, and termite action on the wooden carvings and panel paintings, all of which are to be factored into the annual work-plan of the Archaeological Survey of India.

1999
top
Forgot your username or password?
Become a member