Founded in the 9th century, Fez reached its height in the 13th–14th centuries under the Marinids, when it replaced Marrakesh as the capital of the kingdom. The urban fabric and the principal monuments in the medina – madrasas, fondouks, palaces, residences, mosques and fountains - date from this period. Although the political capital of Morocco was transferred to Rabat in 1912, Fez has retained its status as the country's cultural and spiritual centre. 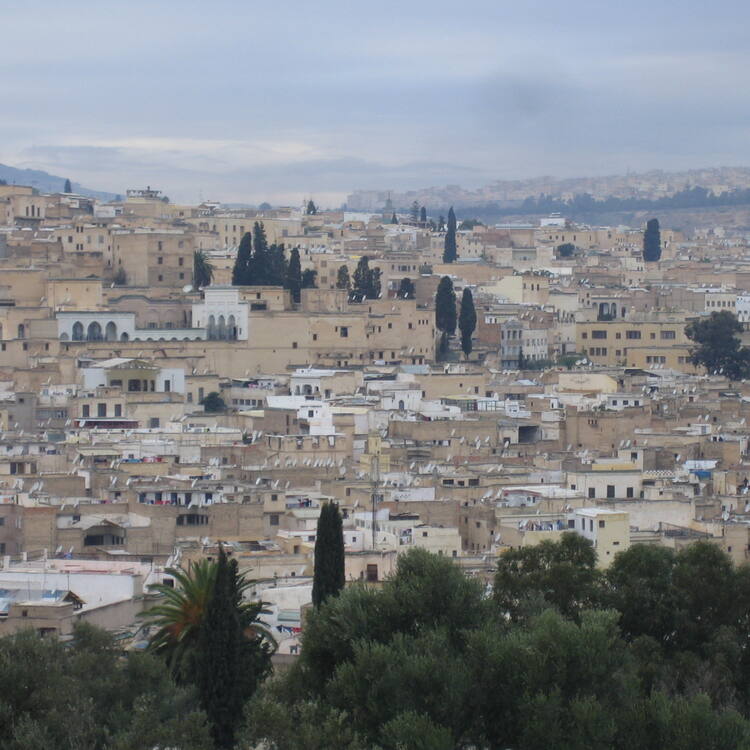 The Medina of Fez preserves, in an ancient part comprising numerous monumental buildings, the memory of the capital founded by the Idrisid dynasty between 789 and 808 A.D. The original town was comprised of two large fortified quarters separated by the Fez wadi: the banks of the Andalous and those of the Kaïrouanais. In the 11th century, the Almoravids reunited the town within a sole rampart and, under the dynasty of the Almohads (12th and 13th centuries), the original town (Fez el-bali) already grew to its present-day size. Under the Merinids (13th to 15th centuries), a new town (Fez Jedid) was founded (in 1276) to the west of the ancient one (Fez El-Bali). It contains the royal palace, the army headquarters, fortifications and residential areas. At that time, the two entities of the Medina of Fez evolve in symbiosis forming one of the largest Islamic metropolis's representing a great variety of architectural forms and urban landscapes. They include a considerable number of religious, civil and military monuments that brought about a multi-cultural society. This architecture is characterised by construction techniques and decoration developed over a period of more than ten centuries, and where local knowledge and skills are interwoven with diverse outside inspiration (Andalousian, Oriental and African). The Medina of Fez is considered as one of the most extensive and best conserved historic towns of the Arab-Muslim world. The unpaved urban space conserves the majority of its original functions and attribute. It not only represents an outstanding architectural, archaeological and urban heritage, but also transmits a life style, skills and a culture that persist and are renewed despite the diverse effects of the evolving modern societies.

Criterion (ii): The Medina of Fez bears a living witness to a flourishing city of the eastern Mediterranean having exercised considerable influence mainly from the 12th to the 15th centuries, on the development of architecture, monumental arts and town-planning, notably in North Africa, Andalousia and in Sub-Saharan Africa. Fez Jedid (the new town), was inspired from the earlier town-planning model of Marrakesh.

Criterion (v): The Medina of Fez constitutes an outstanding example of a medieval town created during the very first centuries of Islamisation of Morocco and presenting an original type of human settlement and traditional occupation of the land representative of Moroccan urban culture over a long historical period (from the 9th to the beginning of the 20th centuries). The ancient fragmented district of the medina with its high density of monuments of religious, civil and military character, are outstanding examples of this culture and the resulting  interaction with the diverse stratas of the population that have influenced the wide variety of architectural forms and urban landscapes.

The boundaries of the property inscribed on the World Heritage List are clear and appropriate and include the urban fabric and the walls.  The buffer zone defined by the Decrees of 23 August 1923 and 29 October 1954 adequately protects the visual integrity.  The Medina of Fez comprises an urban fabric that has remained remarkably homogenous and intact over the centuries.  The main problems noted are the deterioration of the buildings and the over-populated area. The surrounds of the medina are an indispensable element of the visual aspect of its environment and must be maintained as a non-constructible zone.  This area is vulnerable due to pressure from uncontrolled urban development.

All the key elements that comprise the property reflect in a clear and integral manner the Outstanding Universal Value.  The survival of traditional architectural know-how, notably as regards architectural building and decoration trades, is a major advantage for the maintenance of the values of the property.  The Ministry for Culture endeavours, not without difficulty, to ensure that the different actors respect the authenticity of the property.

The Medina of Fez is protected by the local and national legal texts for its preservation and reinforcement, at the local level, of its inscription of the World Heritage List, and notably Decree N°2-81-25 of 22 October 1981 for the enforcement of Law N°22-80 concerning the conservation of historic monuments and sites, inscriptions and art objects and antiquity.

Given the vulnerability of the property, the State adopted a Development Plan of the Medina in 2001. This plan is re-evaluated every ten years. It incorporates specific provisions for the ancient district, and it should rationalise and organize the required urban interventions. In the framework of the programme for the promotion of regional tourism, the local authorities have undertaken safeguarding actions concerning houses threatened with collapse and the rehabilitation of the remarkable monuments of the Medina. The implementation of this programme has been entrusted to the Agency for De-densification and Rehabilitation of the Medina of Fez. The Inspection of the Historic Monuments is the responsibility of the Ministry for Culture and thus ensures the monitoring and the supervision of these projects in conformity with national and international standards for the conservation of historic monuments.