This property includes two components situated in a desert landscape: Jabel Umm Sinman at Jubbah and the Jabal al-Manjor and Raat at Shuwaymis. A lake once situated at the foot of the Umm Sinman hill range that has now disappeared used to be a source of fresh water for people and animals in the southern part of the Great Narfoud Desert. The ancestors of today’s Arab populations have left traces of their passages in numerous petroglyphs and inscriptions on the rock face. Jabal al-Manjor and Raat form the rocky escarpment of a wadi now covered in sand. They show numerous representations of human and animal figures covering 10,000 years of history. 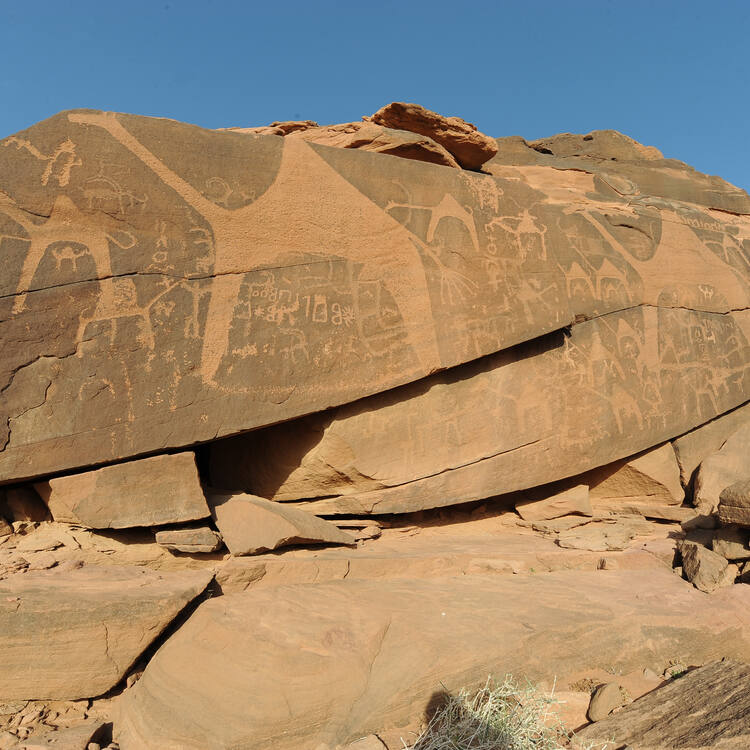 Camel figures in various sizes but all in profile are located at Jabal Al-Manjor, Shuwaymis. © Saudi Commission for Tourism and Antiquities

The serial property of the ‘Rock Art in the Hail Region’ is comprised of two components: Jabal Umm Sinman at Jubbah, located approximately 90 km northwest of the city of Hail, and Jabal Al-Manjor and Jabal Raat at Shuwaymis, approximately 250 km south of Hail. At Jabal Umm Sinman Jubbah, the ancestors of present-day Arabs left marks of their presence in numerous petroglyph panels and inscriptions within a landscape that once overlooked a freshwater lake; and at Jabal Al-Manjor and Jabal Raat, Shuwaymis, the large number of petroglyphs and inscriptions has been attributed to almost 10,000 years of human history within a valley with flowing water. Together, these components contain the biggest and richest rock art complexes in the Kingdom of Saudi Arabia and the wider region. Processes of desertification from the mid-Holocene altered the local environmental context and patterns of human settlement in these areas, and these changes are expressed in the numerous petroglyph panels and rich inscriptions. The attributes of the property include the large number of petroglyphs, inscriptions, archaeological features and the environmental setting.

Criterion (i): The rock art of Jabal Umm Sinman Jubbah and Jabal Al-Major and Jabal Raat near Shuwaymis contain an exceptionally large number of petroglyphs, created by using a range of techniques with simple stone hammers, against a background of gradual environmental deterioration, and are visually stunning expressions of the human creative genius.

The serial approach is justified for this property, and together, the components of the Rock Art of the Hail Region contain all the attributes necessary to express the Outstanding Universal Value. The boundaries of the components of the property are appropriate, and buffer zones have been established. The buffer zone of Jabal Umm Sinman should be extended 1.0 to 1.5 km to the west and south to adequately protect the visual setting and views. Work to lessen the visual impacts on the setting of Jabal Umm Sinman are recommended for the tall water tower and dam constructed by the Municipality of Jubbah. The components of the property have been extensively documented and generally exhibit a good state of conservation, although vulnerabilities exist due to some threats from vandalism, development in the buffer zone and lack of preparedness for increased future tourism activity.

The authenticity of the serial property and of each component is demonstrated by the diversity and large number of petroglyphs located within the components at Jabal Umm Sinman and Jabal Al-Manjor and Raat, and that all have retained their original location, setting, materials, form and design.

Protection is provided through the new antiquities, museums, and urban heritage law, that was approved by the council of ministers Resolution No. M/3 in 1/9/1436 AH, corresponding to 18/6/2015. The Government of Saudi Arabia, and the Regional government of the Hail Region provide substantial resources for the safeguarding of the two components of the property (Jabal Umm Sinman, Jabal Al-Manjor, and Jabal Raat). The Regional Antiquities & Museums office in Hail is responsible for the protection and management of rock art, inscriptions and archaeological sites in the region, and any noted interference or damage to rock art can be reported directly to the Ministry of the Interior by the Saudi Commission for Tourism and National Heritage (SCTH) or by the inhabitants or reported to the local police by site guards or citizens (including local Bedouin tribes). The local community therefore plays an important role in protecting the sites, and in welcoming visitors.

The property is managed by the Regional Branch of the SCTH in Hail, which operates under the supervision of the SCTH head office in Riyadh. There are on-site staff, and site guards for both sites.

A management plan that considers the long-term development and protection of the component sites was developed with the nomination to the World Heritage List; and there are also Regional and local tourism plans in place (dated 2002 and 2004 respectively). A tourism management strategy that includes provisions for the interpretation of the property has been drafted, and there are plans for improved visitor infrastructure. While there are adequate monitoring arrangements for the rock art, monitoring for development and tourism activities could be further developed, given the expected increase in visitor numbers. Heritage Impact Assessment processes are to be established.