The landscape of Val d’Orcia is part of the agricultural hinterland of Siena, redrawn and developed when it was integrated in the territory of the city-state in the 14th and 15th centuries to reflect an idealized model of good governance and to create an aesthetically pleasing picture. The landscape’s distinctive aesthetics, flat chalk plains out of which rise almost conical hills with fortified settlements on top, inspired many artists. Their images have come to exemplify the beauty of well-managed Renaissance agricultural landscapes. The inscription covers: an agrarian and pastoral landscape reflecting innovative land-management systems; towns and villages; farmhouses; and the Roman Via Francigena and its associated abbeys, inns, shrines, bridges, etc. 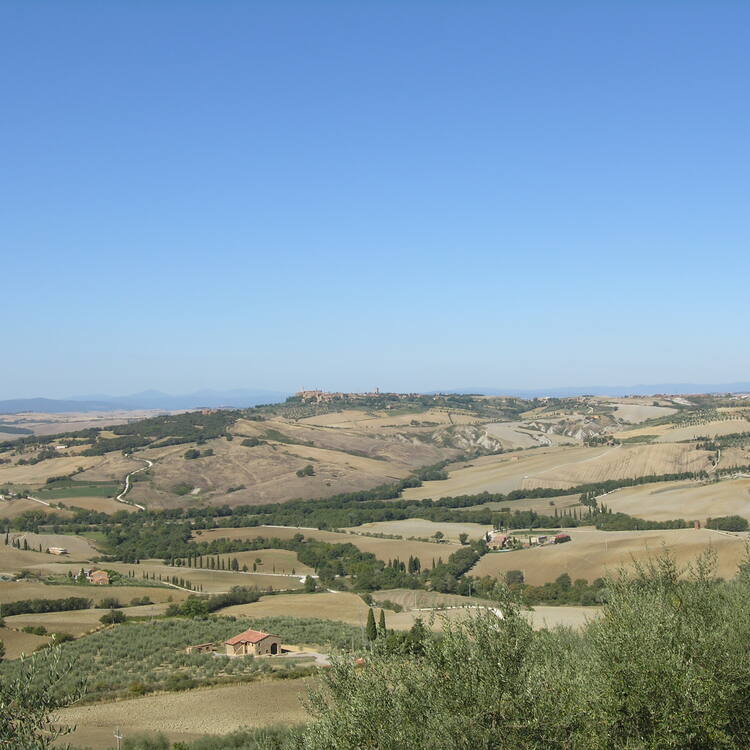 Val d’Orcia, in the Province of Sienna, Tuscany (central Italy), is a rural agricultural landscape that retains much of its Renaissance layout, character and aesthetic. The landscape of Val d’Orcia is layered with evidence of human occupation and settlement extending over thousands of years. The area was important during the Etruscan period and developed during the era of the Roman Empire. In the Middle Ages, agricultural and pastoral production declined and much of the area seems to have been abandoned. A period of economic revival and political stability in the 10th and 11th centuries led to the establishment of monasteries, increased use of the Roman-period Via Francigena (an important religious and trade route linking Rome and northern Italy) and the development of villages under a feudal system.

However, it was the dramatic expansion of the city-state of Sienna in the 13th and 14th centuries that led to the creation of Val d’Orcia’s distinctive rural landscape. The landscape became strongly associated with Renaissance (14th-15th centuries) utopian ideals and an ideology expressed, for example, in a circa 1339 painting by Ambrogio Lorenzetti in the Sienna Town Hall. Wealthy Siennese merchants invested in the development of agriculture, turned the Val d’Orcia landscape into productive farmland, and introduced an innovative land tenure framework (whereby small-landowners paid half of their agricultural produce to merchants as rent). Merchants supported the development of settlements, built fortifications, villas and churches and commissioned paintings by artists such as Giovanni di Paolo and Sano di Petri, artists who reinforced the Renaissance utopian ideals on which the landscape was created.

Following the weakening of Siennese power at the end of the 16th century, the Val d’Orcia gradually declined in economic importance. The comparative poverty and marginalization of the area over the following four centuries had the effect of sustaining traditional land-use patterns and structures and thus retaining the Renaissance layout, character and aesthetic of the landscape. In 1999, on the initiative of five municipalities, the area was declared a regional park whose purpose was to protect and manage the cultural and natural values of the area.

The Val d’Orcia distinctive landscape comprises a network of farms, villages and towns reflecting the Renaissance agricultural prosperity, the mercantile wealth of Sienna, the need for defence, and a utopian aesthetic. The working landscape of fields, farms, trees, and woodlands, is interspersed with low, conical hills on the summits of which are situated towns and villages. The major hill towns of the area include Pienza (a separate World Heritage property), Montalcino, San Quirico d’Orcia, Castiglione d’Orcia, Rocca d’Orcia, Monticchello and Radicofani. Distinctive groups and avenues of cypress pine trees mark out the settlements and define routes.

The area comprises small-scale, mixed-produce farms on which grain, vines, olives, fruit, and vegetables are cultivated. The landscape is interspersed with hay meadows and open pasture fields with livestock. The agricultural landscape, which was inspired by and influenced Siennese painters of the Renaissance, has continued to incite – for example, travellers of the European ‘Grand Tour’ and modern-day photographers. Their images and descriptions have come to exemplify an idealised aesthetic of a Renaissance agricultural landscape.

The boundary of the World Heritage property coincides with the boundaries of the modern-day Park of Val d’Orcia (Parco Artistico Naturale e Culturale della Val d’Orcia).

Criterion (iv): The Val d’Orcia is an exceptional reflection of the way the landscape was re-written in Renaissance times to reflect the ideals of good governance and to create an aesthetically pleasing picture.

Criterion (vi): The landscape of the Val d’Orcia was celebrated by painters from the Sienese School, which flourished during the Renaissance. Images of the Val d’Orcia, and particularly depictions of landscapes where people are depicted as living in harmony with nature, have come to be seen as icons of the Renaissance and have profoundly influenced the development of landscape thinking.

The 61,188 hectare property, along with the 5,660 hectare buffer zone, encompasses all the elements necessary to understand the Renaissance cultural landscape that is the basis for Outstanding Universal Value. The intactness of the property is evidenced in the size, extent, layout, and character of the planned Renaissance agricultural landscape with its largely intact settlements (towns, villages, farm complexes) and evidence of the Roman Via Francigena (and associated abbeys, inns, shrines, and bridges). The property incorporates most of the five municipalities established when the landscape was created in the 14th-15th centuries. The wholeness of the Val d’Orcia is visible in the number of surviving and largely original Renaissance-period structures; in the well-preserved layout of the towns and farms; and in the continued agricultural usage of the landscape. The cypress pines that mark out settlements and routes make a distinctive contribution to the wholeness and integrity of the property.

A few areas of the original planned Val d’Orcia landscape have been incorporated into the buffer zone because they have been subject to intensive change related to modernisation of agriculture. However, the cultural landscape remains generally well-preserved and can be easily understood by visitors for its Renaissance aesthetic.

The Val d’Orcia is a cultural landscape and rural agricultural ensemble that is well preserved and authentic in its form and design, materials, use and function, management system, setting, and spirit and feeling. The high degree of authenticity of the Val d’Orcia derives notably from its history of comparative neglect and marginalization after the sixteenth century.

The layout of the property is clearly recognisable as a Renaissance agricultural landscape that reflects an idealised form and design. The form and design are further evidenced in paintings of the Siennese School of the period. The materials of the built structures (fortifications, villas, churches, streets, farmhouses), many dating to the Renaissance period, along with their architectural forms, homogeneity and extent, are distinctive and historically truthful. The use and function of the land and built structures display long-term continuity with their Renaissance antecedents. Though the management system has changed through time, the Renaissance land tenure framework is evident in the scale and layout of the land divisions.

The landscape evidences the spirit and feeling of the Siennese painters and merchants who inspired and created the landscape of the Val d’Orcia. Artworks, such as those by Ambrogio Lorenzetti, Giovanni di Paolo and Sano di Petri, attest to the aesthetic influence of art on landscape and landscape on art. The aesthetic of the Val d’Orcia landscape is authentic in its ability to continue to inspire the production of art from the Renaissance to the modern day. Local citizens, politicians, farmers and entrepreneurs hold strong feelings of identity with, and pride in the Val d’Orcia.

Threats to the World Heritage property include tourism pressures, modernisation of farming, soil erosion, and gentrification of dwellings, of which the latter is perhaps of the greatest concern for its impact on the viability of local farming communities. Currently Val d’Orcia retains a high-level of truthfulness and credibility with regard to its expression of Outstanding Universal Value.

National legislation for the protection and conservation of cultural heritage (Code for Cultural Heritage and Landscape) provides protection for some individual buildings and complexes in the Val d’Orcia. In addition, it protects ten acres of the World Heritage property including some town centres, surrounding areas and settings around individual sites. Competent offices of the Ministry of Cultural Heritage and Activities undertake monitoring to ensure compliance with national legislation.

The principal management tool for the property is the Management Plan, which focuses on the management of the area as a ‘living landscape’. The Management Plan is comprehensive, ambitious, and inclusive; and stresses the need to share knowledge and increase awareness of local history and heritage values among administrators and the local population. The plan’s objectives include environmental tourism development, promotion and support of traditional agriculture and agricultural products, ecological rehabilitation; and coordination of infrastructure works (e.g., power lines, road projects).

Despite the limited resources, the small size of the population living within the park enables effective levels of direct communication between park residents and management through consultation and information sharing. The park director meets regularly with the municipal authorities to discuss on-going park management.

Sustaining the Outstanding Universal Value of the property over time, will require the continued support of the local population; cooperation of the municipalities; resourcing for skilled staff and conservation projects; maintaining the landscape layout, character and ‘Renaissance aesthetic’, maintenance of built structures, natural features and cultural plantings such as the cypress pines and economic viability of the park through agricultural production and tourism. These priorities must ensure that there is no negative impact on the attributes of Outstanding Universal Value, and on authenticity and integrity.
Activities (1)