The frankincense trees of Wadi Dawkah and the remains of the caravan oasis of Shisr/Wubar and the affiliated ports of Khor Rori and Al-Baleed vividly illustrate the trade in frankincense that flourished in this region for many centuries, as one of the most important trading activities of the ancient and medieval world. 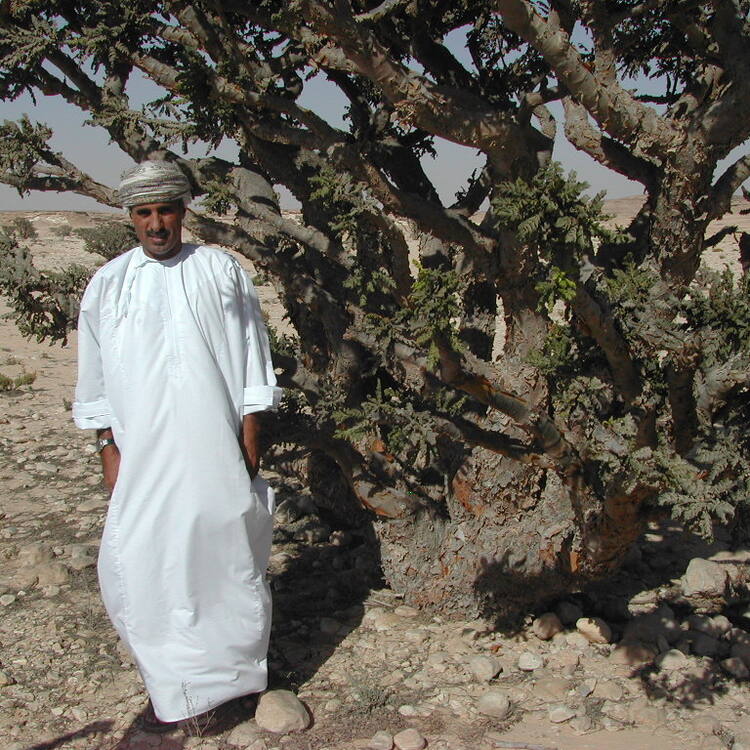 The four components of the Land of Frankincense dramatically illustrate the trade in frankincense that flourished in this region for many centuries. They constitute outstanding testimony to the civilizations in south Arabia since the Neolithic.

The successive ports of Khor Rori (4th century BC to the 5th century AD) and Al Baleed (8th century till 16th century AD) and an outpost close to the Great Desert Rub Al Khali, Shisr, about 170 km inland, represent in a unique way the distribution of frankincense which was produced in the wadis of the coastal hinterland. All three sites were exceptionally fortified. Wadi Dawka is an outstanding example of the growth of the frankincense tree (boswellia sacra) from which the resin was produced, collected and traded.

The port of Khor Rori (the Moscha Limen of classical geographical texts) lies 40 km to the east of Salalah on a hilltop on the eastern bank of a sweet-water outlet (khor). About 400 metres from the open sea, it dominates the khor which opens to the sea and served as a natural harbour. The remains of the fortress are located on a rocky spur running east-west, forming part of a wider defensive system, details of which are still evident. The walls have dressed stone faces with rubble cores. The most heavily fortified part is on the north, where the entrance is located, itself a massive structure with three successive gates on the steep entry path. It is flanked by the remains of towers. The port was refounded at the end of the 1st century by LL'ad Yalutas (evidenced by an inscription still in situ) to control the trade in Dhofar incense. It was the hub of the trading settlements on this coast at that time. The process of disintegration began in the 5th century.

Al-Baleed, a harbor directly placed on the beaches of the Indian Ocean with a khor, a sweet water reservoir behind it, is the historically late name for the town. Artifacts from China (Ming) and other countries indicate its importance as a harbor along the ´Silk Road to the Sea´ from where, in exchange, frankincense was also traded. Though heavily fortified, the town was attacked and partially destroyed on several occasions in the 13th century. By the late 15th century, radical changes to trading patterns imposed by Portuguese and other European trading nations sealed the fate of the town.

Shisr lies about 180 km north of Salalah in the desert. This agricultural oasis and caravan site was a very important station also for water supply on the routes from the Nejd and the hinterland from where frankincense was brought to the ports along the coast.

Wadi Dawkah is a major place where the frankincense tree (boswellia sacra) can still be found and frankincense is harvested to this day. The wadi seasonally drains the north-south mountains disappearing into the desert of the ´Empty Quarter´, the Rub al Khali. The trees grow in the alluvial bed of the wadi under the extreme heat of this region.

Criterion (iii) : The group of archaeological sites in Oman represent the production and distribution of frankincense, one of the most important luxury items of trade in the Old World in Antiquity.

Criterion (iv) : The Oasis of Shisr and the entrepots of Khor Rori and Al-Baleed are outstanding examples of medieval fortified settlements in the Persian Gulf region.

The Land of Frankincense sites include all elements necessary to express its Outstanding Universal Value. The property is of adequate size to ensure the complete representation of the features and processes underpinning the property’s significance.  All attributes of Outstanding Universal Value are fully present within the properties. All are fully present, none are eroded and the dynamic functions between them are fully maintained.

The property does not suffer from adverse effects of development and/or neglect.  Due to the full protection of the sites no threats can be observed. Through protection of all four sites by the government of all sites the integrity is guaranteed. All buffer zones have been respected and no encroachment can be observed. All properties are fenced and the buffer zones marked.

The authenticity of the property is not open to question.  Three components are archaeological sites that have had no inhabitants for centuries and the fourth is a natural site in a desert area.

The property is protected by the Royal Decree No. 6/80 on the protection of the national heritage, and its buffer zone was given legal status by Royal Decree No. 16/ 2001.  The property is managed through a Management Plan.  The sites are fenced and the buffer zones are marked. In Shisr, a small settlement of the Bedouins lies within the buffer zone (radius of 700 meters from the property center).  Also in Shisr the palm trees of the oasis, part of the buffer zone, will be replaced by young trees by the authority. The re-generation and maintenance of plantation schemes will be essential in the future.

Major measures have been undertaken to maintain the property’s authenticity and integrity and to protect the archaeological sites against interventions by visitors. Visitors must use only the access paths which are laid on Geo-textiles to protect the archaeological surfaces. In the ruins the stone walls of buildings have been protected with sacrificial layers of stone.

All the archaeological parks are in very good condition, and Al Baleed and Khor Rori have Visitor Interpretation Centres to manage the number of visitors (in 2014 more than 150000) and introduce them to the cultural background of the sites. An Interpretation Centre for Shisr is being planned.  The Land of Frankincense sites are an integral part of a long-term sensitive cultural tourism strategy to inform regional, interregional and international visitors about the rich tradition of the Land of Frankincense.